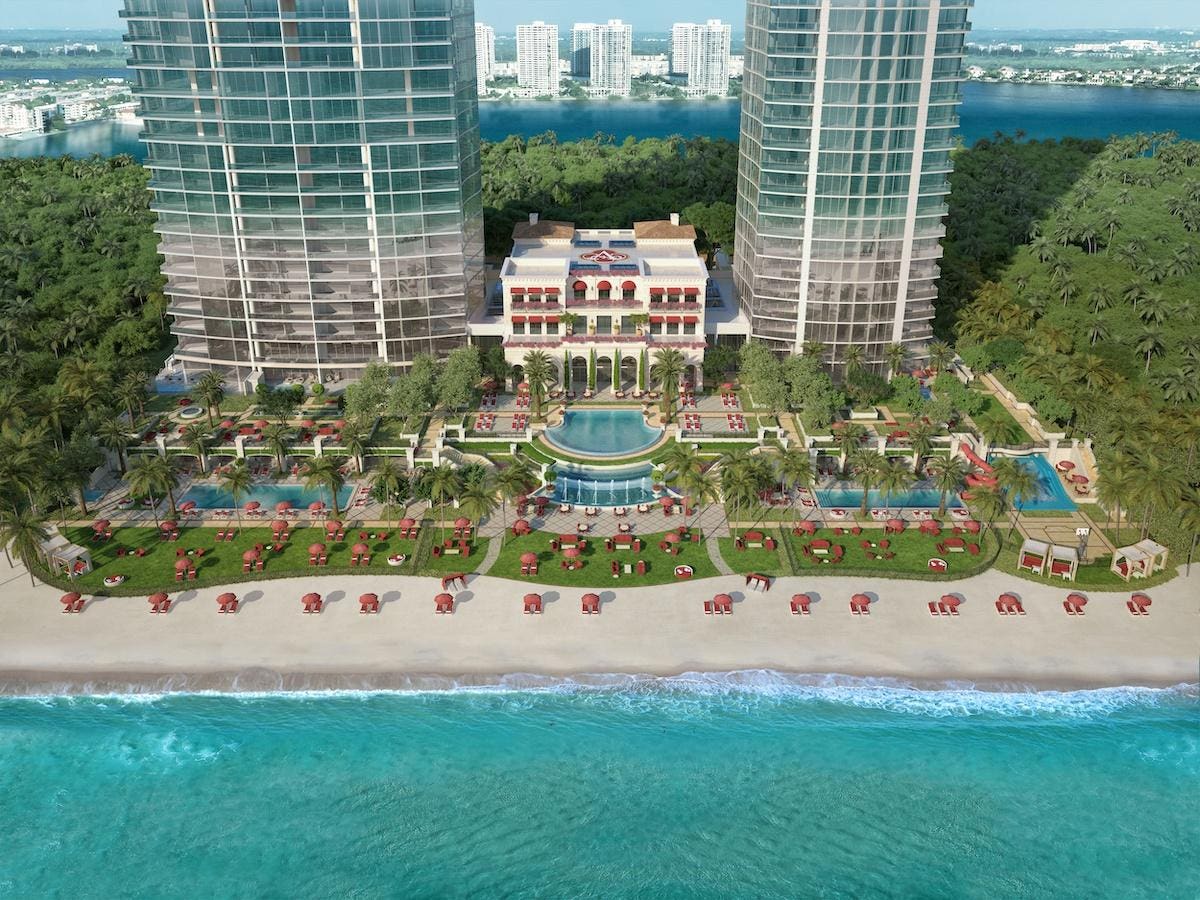 Ultra-high net worth real estate has long been full of hot shots, narcissists, and bravado.

In turn, unscripted reality shows like Bravo’s “Million Dollar Listing” and Netflix’s “Selling Sunset” have minted ratings and superstars out of realtors and developers, many of whom were just scrapping to get a listing or a loan a few years earlier.

Luxury real estate is also rife with hyperbole: browse through most multi-million dollar listings in Miami, Manhattan, or Los Angeles, and you’d be tempted to believe that every kitchen is fit for a Michelin-starred “chef” and that each fixture and finish belongs in the Louvre.

Against this background, it wouldn’t be unreasonable therefore to think that the tagline for the recently completed Estates At Acqualina in Sunny Isles Beach—a.k.a “The World’s Finest Residences”—might whiff of a little aggrandizement.

If you’re familiar with Florida’s “other Trumps”, however, you’d also be totally wrong since hyperbole is not their style and perfection is what they do.

Seventeen years ago in 2006, South African-born brothers, entrepreneurs, and real estate developers Jules and Eddie Trump, along with Jules’ wife Stephanie (none of them related to the former President), opened Acqualina Resort & Residences, spanning 4.5 oceanfront acres with 98 guest rooms, 188 residences, and award-winning restaurants and amenities all wrapped up within a 51-story tower fronted by 400’ of perfectly-manicured Atlantic Ocean beach 30-minutes north of Miami.

In the process, the Trumps succeeded in setting a new high bar for luxury real estate and hospitality in South Florida. More substantially, Acqualina also put Sunny Isles Beach on the map as the epicenter of Florida’s new “Riviera”.

Over the next few years, Acqualina quickly became one of the most coveted hotel reservations in the world (no hyperbole here). It’s earned Forbes Travel Guide’s Five Star and AAA’s Five Diamond Awards—both luxury hospitality gold standards—fourteen years in a row, and recently was ranked the #1 Best Destination Resort in America by USA Today.

As a result, if you call up to book a room at Acqualina on any date other than a Monday in August, you’ll likely to be met with a typical, perpetual refrain: “Sorry. We don’t have anything available for those days”—which, if you’re the Trumps, is a good problem to have when your starter rooms go for an average of $1,200 a night.

“Our initial vision with Acqualina was to build a family-run hotel that had all of the elements of the finest resorts in Saint-Tropez with the elegance of a great, historic city hotel,” says Jules Trump about their original vision for Acqualina and the gap they presciently saw in the market.

“Stephanie, Eddie, and I all felt back then that what was really missing in luxury hospitality were great amenities and creature comforts, particularly while spending the day on the beach, including everything from dining and drinks to exceptional service and spas. We wanted our guests to step into the exclusive world of Acqualina and feel as though their every wish and desire had been anticipated before they even had to ask for it.”

Using Acqualina Resort’s success as a springboard, the Trumps opened The Mansions At Acqualina next door a decade later in 2015, which consisted of 79 private residences in an iconic 47-story building designed by Cohen Freedman Encinosa & Associates that’s still the tallest in Sunny Isles Beach at 643’.

Billed as Florida’s first “mansions in the sky”, The Mansions At Acqualina delivered on virtually every detail, finish, and amenity that hadn’t previously been pushed in luxury real estate before. It also set a new standard for what the synergy of world-class design, art, architecture, and lifestyle on the beach could look like—something which every other South Florida developer is still trying to catch up and outduel each other on.

Not surprisingly, especially given their perfect timing well after the Great Recession, The Mansions At Acqualina fully sold out within months of launching sales, further solidifying the Trumps’ repute as one of the leading luxury real estate developers in the world—even if their legendary lack of presence in the press and shouting their success from their penthouse rooftops belies their more innately modest and humble side.

Fast forward another six years to now, and the Trumps’ newest development—The Estates At Acqualina, which brings to market 245 residences in two gleaming, glass waterfront towers this time on the north end of the resort—somehow manages to raise the luxury real estate bar again.

The Estates’ budget is part of that success, which at $1.8 billion makes it one of the most expensive new residential developments in America. This perfection-at-any-cost ethos ensured that no expense was spared to surpass buyers’ expectations at every level, from the world-class architects, interior designers, and craftsmen behind the planning and construction down to every material, finish, and fixture and the bolts, screws, and rivets that hold it all together.

The other driver of The Estates’ success has been clarity of vision—and equally importantly, the ability to execute on it, which not coincidentally has been one of the Trumps’ real estate hallmarks for more than four decades since they first developed Miami’s Williams Island back in the 1980s.

Since its origin moment, the Trump Group’s aspiration for The Estates at Acqualina was to create a luxury lifestyle that would set it apart from anything else in the world, and to design a building from the inside out within which those details, experiences, indulgences, and amenities could be brought to life in a way that would be effortless and osmotic.

“Perfection in anything isn’t easy to achieve,” says Jules, “But The Estates at Acqualina is quite simply that. After the incredibly successful opening of Acqualina Resort & Residences seventeen years ago, followed by the creation of The Mansions at Acqualina, The Estates go even further than we ever thought we could go. No expense was spared to design and build the two towers, everything is the best in its class, and our quality is incomparable in terms of the materials we’ve used including mosaics, marbles, and metals. The Estates are also a celebration of art, architecture, and lifestyle and a pursuit of perfection that you’ll see manifested everywhere, from the grand formal entrance to the signature integration of modern and classic architecture to the exemplary services that we offer to our residents.”

Not surprisingly—and with a little boost from the pandemic which sent 40 and 50-something, deep-pocketed buyers from New York in particular fleeing to Florida for larger floor plans and an upscale work-from-home lifestyle—both The Estates’ North and South Towers pre-sold out by mid-2021.

The Estates’ amenities and exclusivity were a big part of that, says Jules, in addition to the towers’ beachfront real estate and Florida’s tax advantages, which helped to attract buyers with younger families who naturally gravitated to six acres of Masters-quality lawns, landscaping, and pools on the ocean, a quarter-mile of postcard beachfront, five restaurants, and over 45,000 SF of indoor and outdoor amenities within the Tuscan-styled Villa Acqualina connecting The Estates’ two towers.

“The Estates not only provides the world’s finest residences,” Jules tells me with a rare note of self-satisfaction, “But also the world’s most luxurious amenities for our residents, redefining the standard for sophisticated living. The Acqualina brand has always prided itself on putting our residents first, and Villa Acqualina which is the epicenter of our amenities is an unprecedented offering in a residential development, including a spa, an ice skating rink, bowling lanes, a movie theater, a kids club, a teen room, an amazing health and fitness sanctuary called Acquafit with a juice bar, salt room, and boxing gym, and a Wall Street Trader’s Club where residents will have access to ticker tape, computers, and a board room.”

If The Estates At Acqualina has a penultimate pièce de résistance, however, for Jules, Eddie, and Stephanie it’s the towers’ lobbies, both of which were envisioned by German designer Karl Lagerfeld, who for decades was creative director for the French fashion house Chanel. The Estates’ lobbies are Lagerfeld’s only residential commission in the U.S. (Lagerfeld died in 2019), so they hold a special place for the Trumps given their reverence for world-class design and architecture.

“The Estates architecturally are purposefully a combination of contemporary elements and design merged with European Old World style that Eddie and I, along with my wife Stephanie, personally love,” says Jules. “We’ve found that our buyers love it too. So, when we committed to creating ‘The World’s Finest Residences’ at The Estates at Acqualina, we knew that had to be apparent from the minute our residents stepped through the door. Thus, the lobby design was a very important decision. Toward that end, it was an obvious choice to have our lobbies designed by one of the world’s most important designers: Karl Lagerfeld, the very master of modern creativity. We also take great pride in the fact that Karl chose Acqualina as his first residential project in the United States to bring his eye for opulence, luxury, design, and style to.”

On the culinary front, The Estates At Acqualina is equally world-class in its A-list, pursuit of perfection.

Avra—the first expansion of the iconic New York City Greek restaurant—recently opened in Villa Acqualina in November 2022 to widespread acclaim and is now one of Miami’s hottest new dining spots.

“At The Estates, Avra has quickly become one of the biggest selling points,” says Jules. “It’s more than a $10 million venture—the restaurant is 12,000 square feet, including an al fresco dining area that overlooks the ocean. The design includes an infinity pool, a collection of contemporary art and a panoramic bar. The restaurant flies in fish from the Mediterranean every day, has its own network of fishermen, and produces its own olive oil. Based on my numerous times dining at Avra in New York, dining there is an experience that transcends your typical meal out and creates a one-of-a-kind experience.”

If everything about all of this sounds appealing, billionaire neighbors are your thing, and you have a few million to spare, a few residences at The Estates At Acqualina can still be yours via re-sale.

Furnished by Fendi Casa, Casa D’ Oro flips the script on the typical South Florida condo model which for decades has priced properties vertically—namely that the higher up you go the more expensive and larger they are.

Casa D’ Oro is the anti-penthouse, located on the South Tower’s ground floor right next to the Acqualina resort, with direct beach access, a private pool, outdoor summer kitchen, a private elevator, a four-car garage, 11’ ceilings, and six bedrooms and 7 ½ baths spread out across 11,605 impeccably furnished square feet.

The second is an unfinished 15,000-square-foot, four-story residence located in the Boutique North Tower that’s now on the market for $85 million—which if it sells for anywhere near its asking price would be the most expensive condo ever sold in South Florida, besting the current record of $60 million hedge fund billionaire Ken Griffin paid for his 12,500 square foot Faena House pad in Miami Beach in 2015.

Named Casa di Coba after its current owners Joshua and Jenni Coba—who made a fortune in haircare and are reselling the condo to take advantage of Miami’s still smoking hot real estate market—the residence has seven bedrooms, nine bathrooms, six powder rooms, a private pool and four-car garage, its own elevator, a three-story spiral staircase, a 3,100 square foot guest house, and a private oceanfront cabana furnished by Fendi.

As for the Trumps’ next magnum opus after The Estates, Jules, Eddie, and Stephanie remain coy. But the one thing that’s for certain is that inertia isn’t their thing.

“We’re always looking at new opportunities and places where we can raise the bar again and build something that sets a new standard for luxury and lifestyle,” Eddie tells me with a wry smile. “Where and what that is, you’ll just have to wait and see.”

Judging from what he, his brother Jules, and Stephanie have done before, every other developer should be holding their breath as well to see where the bar moves next.