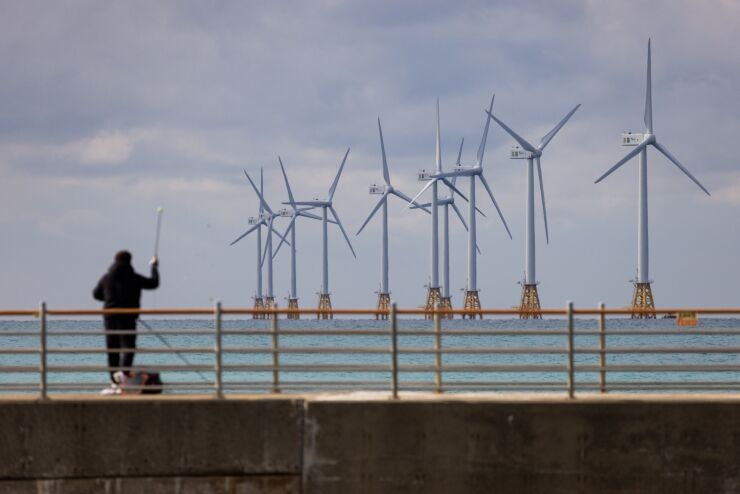 With the Inflation Reduction Act promoting renewable energy development, it is expected major green energy deals will be plentiful in the coming months.

New Jersey Gov. Phil Murphy has pushed for his state to develop wind power facilities, so it’s not surprising that the New Jersey Economic Development Authority is among the first to take advantage of tax breaks provided by the act by selling a $160 million green wind energy taxable municipal bond Thursday.

The bond will be one of the largest wind energy bonds in United States municipal history, said green bond expert Andrew Teras, director of municipal research at Breckinridge Capital Advisors.

The 2023 Series A bond will support an offshore wind port project to be constructed on the eastern shore of the Delaware River in Lower Alloways Creek, New Jersey. The site will serve as a launching and monitoring point for offshore wind energy projects and a manufacturing site for turbine components.

The bonds should draw much interest, Teras said, since a certified green bond will attract investors that don’t usually invest in munis.

The EDA is a known name, he noted, and the state’s finances have improved.

New Jersey has taken the lead in setting policy urging “effective clean energy markets,” he said, “and this effort seems to fit that template.”

Noting “growing demand for public debt linked to energy and environmental assets,” Hendricks said the deal is likely “part of a wider trend ranging from the creation of an EPA Greenhouse Gas Reduction Fund through the Inflation Reduction Act, to large scale wind and solar procurement by government agencies through long-dated power purchase agreements, to the establishment of new state and local financing authorities like the Connecticut and New York Green Banks, the Washington D.C. Green Bank and the New York City Energy Efficiency Corporation, all organized to originate long-dated climate financing in the public interest.”

The authority is developing the port in this context.

The bonds are rated Baa1 by Moody’s Investors Service and BBB-plus by S&P Global Ratings. Both assign a positive outlook to the deal.

Moody’s said the bonds have more risk than other New Jersey bonds since the state’s obligation requires legislative approval annually and is not for “essential government services.”

“A de-emphasis of the state’s environmental goals, an increased preference for other clean power sources or conditions affecting companies using the port could weaken the rationale for the project,” Moody’s said. Moody’s rates the state A2.

The bonds mature serially from 2024 to 2033 and are callable at par with 25 days’ notice. While federally taxable, interest is exempt from New Jersey taxes for state residents.

The port will be one of a few on the East Coast and will also support the development of wind power infrastructure outside of the state.

“The port is one of only a handful of ports on the U.S. East Coast with the capacity to support marshalling and co-located [wind] manufacturing, given its large acreage and absence of vertical restrictions (i.e., absence of bridges between the port and open ocean),” the authority said in its roadshow for investors.

Loop Capital Markets is running the book on the deal and JPMorgan is co-underwriter.