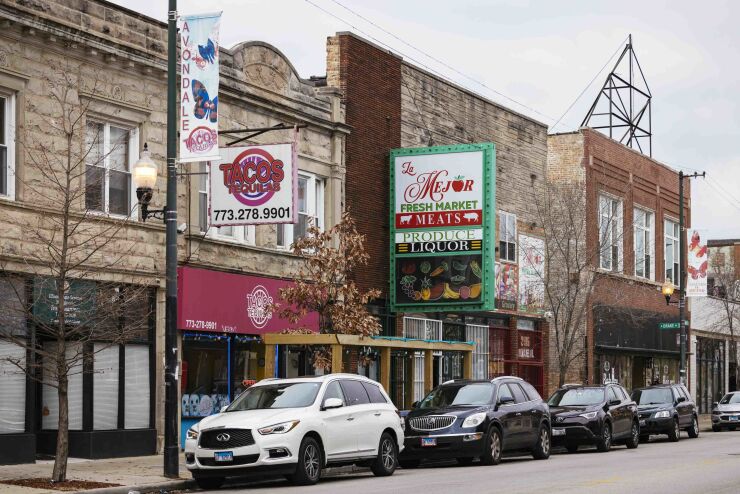 Municipals were a bit stronger Friday as traders geared up to see a rather healthy slate of new issues head to market during a holiday-shortened trading week.

Volume for the upcoming week is estimated at $8.34 billion, consisting of $6.30 billion of negotiated deals and $2.04 billion of competitive sales. The biggest deal of the week is coming from Chicago’s Sales Tax Securitization Corp.

Financial markets in the U.S. are closed on Monday for the Martin Luther King, Jr., holiday. Trading will resume on Tuesday.

Triple-A benchmark scales saw yields drop as much as four basis points late in the session Friday while Treasuries were weaker and equities strengthened.

The market displayed a positive tone on Friday, according to two municipal experts.

“The market is looking OK and we have a window of opportunity here,” a New York trader said of the availability of higher yields.

“We do have a fairly heavy week for a holiday-shortened week, but there seems to be a lot of cash around due to the lack of issuance so far in January,” he added.

The trader expects the slate of new deals heading to market will be highly attractive to hungry investors.

“They should do well if they are priced correctly and I would expect to see some pretty good followthrough in the secondary as well,” he said.

“The larger transactions will test the market a little bit — especially since there is a lot of money looking to be put to work,” he said, adding the inflows into municipal mutual funds this week were a positive trend.

He pointed to the $550 million Miami-Dade County seaport deal scheduled for pricing on Wednesday as attractive for its structure, availability of term bonds and good maturity size on the long end.

Demand is overshadowing supply on the buy side of the municipal market and new deals are getting quickly snapped up by hungry buyers.

“The municipal market lacks enough bonds to meet the insatiable demand that appeared right out of the gate in 2023,” said Michael Pietronico, chief executive officer at Miller Tabak Asset Management.

“It is clear that bonds are where investors want to be as recession fears grow,” he said, adding, “Longer duration assets appear to be in for a great 2023 with the Fed in full inflation-fighting mode.”

In the secondary market, meanwhile, the long-end remains attractive, while the short end is on the richer side looking at the ratios of municipals to Treasuries, the trader observed.

“But, then again, there’s nothing around for people to buy, so they have to hold their nose and grin and bear it,” he said.

He said the presence of mutual fund inflows this week — some of the largest the market has seen in approximately a year — lends itself to the strength of the market.

“Hopefully, this is the beginning of a trend,” Pietronico said.

“Munis have rallied in absolute and in relative terms during the past three months even though other indicators, like fund flows, have not been as positive,” Daniel Berger, senior market strategist at Refinitiv MMD, said in a comment Friday. “Fund flows were positive for only three of these past 15 weeks. Yet they rebounded sharply this week.”

“The muni market may be suffering from FOMO (fear of missing out). During this holiday-shortened week, look for this muni rally to continue as market participants may be anxious to put their cash to work,” he wrote.

Primary market ahead
The calendar is topped by a $735.967 million deal from Chicago’s Sales Tax Securitization Corp.

The deal consists of Series 2023A and 2023B bonds, which will be priced in five tranches consisting of senior lien and second lien bonds, social bonds and tax-exempt and taxable refunding bonds. The issue could be upsized to as much as $1 billion, based on results of a tender offer and market conditions.

The sales tax securitization bonds are set to be priced on Wednesday and Thursday by UBS Financial Services, RBC Capital Markets and Siebert Williams Shank as senior managers.

Other large deals on the negotiated slate include:

Tennessee Energy Acquisition Corp.’s (A2///) $700 million of Series 2023A-1 tax-exempt and Series 2023A-2 taxable gas project revenue refunding bonds. The deal will be priced by Goldman Sachs.

Main Street Natural Gas Inc.’s (A3/NR/NR/NR) $696 million of Series 2023A gas supply revenue bonds. The deal will be priced by Citigroup on Tuesday.

In the competitive arena, the California Infrastructure and Economic Development Bank (Aaa/AAA/AAA) is selling $530.91 million of Series 2023 clean water and drinking water state revolving fund revenue green bonds on Wednesday. HilltopSecurities is the financial advisor while Hawkins Delafield is the bond counsel.

Montague DeRose & Associates and Piper Sandler are the financial advisors; Foster Garvey is the bond counsel.

How the spy balloon popped a US-China rapprochement
Mortgage rates drop to the 5% range for the first time since September
Robots could surpass workers at Amazon by 2030, Cathie Wood says
Here’s Why Chesapeake Energy Shares Were Halted on Tuesday
Jim Carrey’s Los Angeles Estate Hits The Market For $28.9 Million