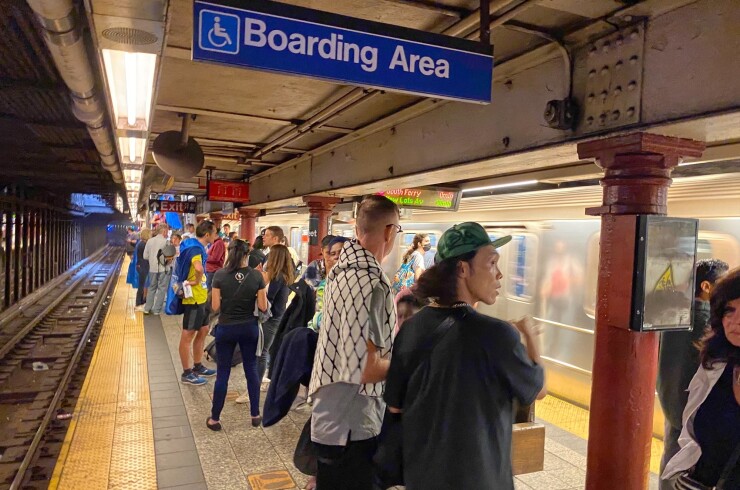 As the federal government’s emergency COVID-19 aid dwindles, the New York Metropolitan Transportation Authority is looking at ways to restore its fiscal health in the face of a variety of challenges both new and old.

The MTA’s proposed $19.2 billion budget for 2023 and its four-year financial plan both note that the $15 billion in COVID-relief funds has been whittled down to $5.6 billion and will soon be exhausted.

The proposed 2023 budget the MTA unveiled at its monthly board meeting in Manhattan Thursday assumes the state, city or federal government will provide an additional $600 million in funding. If this is not the case, the MTA said it will take “significant” cost cutting actions such as larger-than-expected fare hikes and layoffs.

The MTA is required by law to present a balanced budget for the calendar year, which doesn’t align with the state’s fiscal year that ends March 31.

The November plan, taking into account the recommendations made in its July financial plan, outlines actions from the MTA to cut the deficit to $600 million from $2.6 billion in 2023 and to $1.2 billion from $3 billion in 2025 and 2026.

“The bottom line is that for New Yorkers, mass transit is like air and water — we need it to survive,” MTA Chair and CEO Janno Lieber said at the meeting. “And that means it needs to be reliable, safe and affordable for everyone.”

Lieber said the proposed budget “puts us in a position to continue delivering the essential transit services that customers rely on while also prioritizing long-term fiscal responsibility.”

In calculating the out-year deficits, McKinsey & Co. conducted a ridership forecast in July. Since then, ridership has come in at about the midpoint of the forecast. The farebox revenue gap based on the McKinsey forecast when compared with pre-pandemic fare and toll revenue projections averages $2.1 billion for 2022-2026.

The MTA is forecast to have a lower than expected deficit in 2022, driven down by less than expected expenses combined with higher than projected revenues. However, the deficits in 2023-2026 are higher in that forecast, mostly because of increased pension cost projections.

The proposed 2023 budget assumes the restoration of recurring fare and toll increases by June that will provide $373 million in additional annual revenue.

If additional government funding doesn’t come though, the MTA said drastic actions would be necessary, including faster spending of the last of the federal funds, staff cuts, deferral of capital projects and/or service reductions.

He said MTA actions to close the deficits could include expanding operating efficiencies for $100 million, repaying the Federal Reserve for the $2.9 billion of deficit note borrowing instead of selling bonds to yield about $190 million a year in debt service cost savings and by using federal funds for operating and debt costs for a savings of $1.8 billion.

There has not been a fare increase since April 2019 and Willens said the MTA is proposing the fare hikes because of rising labor and inflation costs.

Still, they can and should go much further, he said.

“Efficiencies negotiated with labor should be a substantial part of the solution. Changing labor contracts can be very challenging, but this will be key to transforming the agency to bring down recurring costs without cutting service or jobs,” Rein said.

Rachael Fauss, senior policy advisor for Reinvent Albany, said the group’s new report, Ridership Down, supports the MTA’s case that it faces a fiscal cliff as federal aid runs out.

“The governor must deliver new dedicated funds in the fiscal 2023-24 executive budget to provide certainty as soon as possible to the MTA and transit riders,” she said in testimony before the MTA board Thursday.

As of October, monthly subway, bus and light rail ridership remains at 65% of pre-pandemic 2019 levels, Fauss said, adding that McKinsey is projecting that ridership will reach only 80% of pre-COVID levels by the end of 2026.

“Additionally, debt remains a huge cost and it has spiked to historic highs. It now makes up 21% of recurring operating funds, whereas in 2004, it was 11%,” she said.

Getting riders to return to the city’s subways and buses — a key factor in bolstering the system’s long-term viability — will depend upon several factors both real and perceived, which include the rise in work-from-home and how safe people feel when riding on mass transit.

“Work from home is here to stay. It’s unclear how much of it is going to continue impacting on subway ridership. We’re doing everything in our power as MTA operators to make mass transit attractive,” Lieber said in an interview Monday on NY1’s Inside City Hall.

“We’re trying to run really good service; service has been really pretty good this year, and railroads had having service like they’ve never had before,” he said. “[We’re taking] the steps to make sure that people not only are safe, but that they feel safe. That’s why those announcements, where we’re letting people know that cops are on the platform if they’re having any concerns that if cops need to intervene, all those things are designed … to make mass transit more attractive over time.”

The MTA is a state agency that Albany took over from the city in the 1960s. It runs the city’s subway, bus and commuter rail lines, seven toll bridges and two tunnels. Since 2011, it has sold about $43 billion of debt.

The Triborough Bridge and Tunnel Authority has almost $9 billion of debt outstanding. The TBTA’s senior lien general revenue resolution bonds are rated Aa3 by Moody’s AA-minus by S&P and Fitch and AA by Kroll. All four agencies assign a stable outlook.

Renae Reynolds, executive director of the non-profit Tri-State Transportation Campaign, said the state needs to step in and help the MTA now.

“The continued underfunding of the MTA has put the agency in a dire fiscal crisis. Without new revenue sources, fares will have to increase, services will be cut, and workers will be laid off,” she said. “While these measures will temporarily help close the MTA’s budget gap, they will also make it harder for working families and seniors to get around — and make our region less competitive economically.

“We’re calling on the governor and state lawmakers to immediately end the gas tax holiday and implement new dedicated funding sources for the MTA,” she said. “This is not a problem that can be resolved overnight, but Gov. Kathy Hochul and state leaders have failed to enact any meaningful solutions.”

The state may well have to be part of the solution to fix the MTA, Rein said.

“But nobody should casually believe that the state has money to divert from other programs to fill the MTA’s gap,” he said. “Nor should they believe that raising New York’s already highest-in-the-nation’s taxes isn’t a risk to our tax base and economy. Any increase in taxes needs to carefully consider the tradeoffs.”

Still in the works for the MTA is a congestion pricing program to toll traffic entering lower Manhattan, perhaps by the end of 2023, to support capital programs. In October, State Controller Thomas DiNapoli warned against diverting that revenue to the operating budget.

The MTA Board will meet on Dec. 21 to consider and approve the final budget for 2023.