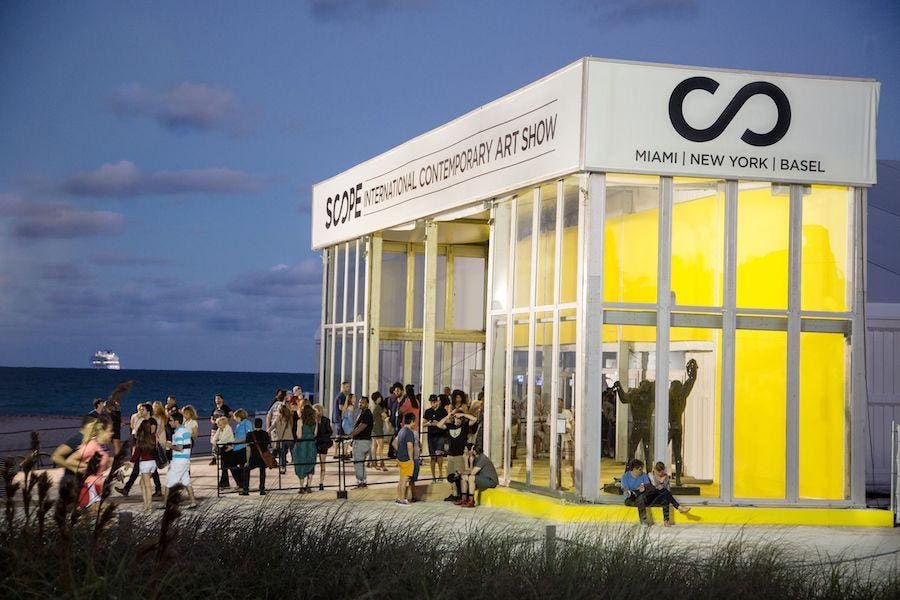 Miami Art Week 2022 has arrived. While there are many highly anticipated shows, there are few as innovative as Scope. Founded by Alexis Hubshman, the event will feature a variety of diverse names on its roster including Thandiwe Muriu, Derrick Ofosu Boateng, Clay Apenouvon, Patrick Tagoe-Turkson, Angèle Etoundi Essamba, Osborne Macharia, Sesse Elangwe, and Charly Palmer. Both national and international exhibitors will be attending the event from places including New York, Dubai, Paris, and Seoul.

I recently spoke with Hubshman about the evolution of Scope, The New Contemporary, which is the show’s platform for emerging artists, as well as how the art scene has changed in the past two decades.

Amanda Lauren: How did you come up with the idea for Scope?

Alexis Hubshman: It was the early 90s, and I had recently graduated from Bard College after spending a year studying architecture at the Glasgow School of Art. I was now in New York City, an artist exploring opportunities and making a living entrepreneurially.

I quickly learned there wasn’t much in the way of infrastructure for emerging artists. If a blue chip gallery was showing an emerging artist, it was in a back room. Because I built my own modest collector base and enjoyed exploring backrooms, I began taking my small but loyal collectors on tours, introducing them to the work of emerging artists I respected. In many cases, they started collecting these hidden gems. It became clear that creating a gallery focused on emerging contemporary art would be a warmly welcomed alternative to the frozen establishment.

Rare, a nod to the Meat District, quickly made a name for itself as a gallery presenting emerging contemporary artists like Chris Johanson and Anthony Goicolea. Great press and sales followed, and I knew that attending international art fairs was the next step to building careers and amplifying our brand.

Pre-2000, art fairs were mostly closed little worlds unto their own. Just a few major shows matched our ambition. As I was vying for these shows, networking with decision-makers, and mostly hitting walls, I began ideating Scope as a platform for like-minded galleries.

Rare was invited to participate in the first-ever ArtBasel Miami, and, perhaps insanely, I launched the first Scope Miami at the exact same time.

Amanda Lauren: Can you tell me more about how Scope has evolved since its inception?

Alexis Hubshman: Our first iteration, a year before Scope Miami, took place at the Gershwin Hotel. I chose the Gershwin because It was known as a sexy warehouse of up-and-coming models, creative talent, and various tastemakers. I knew it would make the perfect backdrop for a strategically timed event to coincide with the New York Spring auctions, which unabashedly took advantage of all the international collectors brought to town. Offering a week of free drinks, we enticed models to walk the runway in front of the auction houses, vogueing collectors into visiting our show. The hotel rooms were cheap, it was sexy and intimate, and the first show focused on emerging art was born.

Scope was founded with the mandate to present culturally relevant art events that were both intimate and exciting. We collaborated with curators, worked with emerging culture shifters, presented indie music, and curated a substantial film program. It was an “experiential activation” before that exhausted buzzword was ever used.

With over 87 shows presented in Switzerland, Los Angeles, London, New York, Miami, Pampelone, and the first art fair in the Hamptons, Scope has remained true to its mandate: a unique platform for all participants, galleries, sponsors, and partners to think out of the box and flex creatively in a way they couldn’t elsewhere.

Lauren: Scope Art Show will be celebrating its 21st year in Miami Beach. What will be different at this year’s show compared to previous years?

Hubshman: Over the last twenty-one years, I’ve had a front-row seat as the art world has transformed during the rise of the art fair. But one constant has always underpinned our mandate to level the playing field for the galleries, artists, curators, and collectors that have supported Scope—introducing new talent to the world. It has been gratifying to watch the evolution of an instinct and how we continue to inspire our base of collectors and brand partners with creative cross-industry experiential programming featuring monumental sponsorship activations. We embrace our role in systematically building up the brands and galleries we showcase.

Scope is committed to curating experiences for attendees. This year will be unlike ever before as programming has reached tremendous heights. From wellness by Alo Yoga, film programming with Exquisite Moving Corpse, talks by The Keith Haring Foundation and Brand Innovators presenting Culture Shifters, digital curation by Creative Artist Agency and Superchief, to creative performances by Anyma and Night Tales.

Lauren: Scope is known as an innovative and cutting-edge show, but what makes it stand out among other shows, especially during Miami Art Week?

Hubshman: Scope’s established passion for presenting emerging culture with undeniable energy is the fundamental building block to our journey to becoming a heritage brand. We were the first culturally engineered art show. Even though today there are more satellite fairs than I can count, we’ve established a reputation as having a true passion for emerging art and are dedicated to our original mission of supporting new and emerging talent.

Lauren: Tell me about The New Contemporary and how it came about.

Hubshman: The New Contemporary program, an experiential multidisciplinary program located in our expanded Atrium, grew from the Scope Foundation, which launched in 2007 as a nonprofit 501(c)(3). The Scope Foundation’s mandate was to support emerging contemporary artists through grants, awards, and acquisitions. The Scope Foundation was primarily supported by Scope International Art Show but was also funded by corporate sponsorship, fundraising, and private donations.

It was dedicated to not only supporting the international emerging artistic community but also local schools and not-for-profit arts institutions. Performance, cinema, video, sound, and installation art have long been essential and fertile parts of the emerging contemporary art scene. The Scope Foundation was a leader in dedicated support to such programs, in turn redefining the notion of the art fair’s responsibility to the gallery and artist.

This year, The New Contemporary will feature daily programming showcasing large-scale installations, music performances, and panel discussions during the day while continuing our long-standing commitment to wellness. Guests are encouraged to attend morning healing programming and guided meditation against the backdrop of beautiful South Beach. This multi-day destination will continue to transform after-hours into a premium nightlife experience and feature world-class music talent at night.

Lauren: What are you most excited about this year?

Hubshman: To celebrate The New Contemporary, we are presenting the most monumental and provocative activations than ever before as we continue to honor and expand our mission of supporting and providing a platform for artists and galleries that push the boundaries of art through inclusivity, technology, global politics, and local community engagement.

I don’t think I’ve ever been this excited about the incredible talent we will be showcasing within and under The New Contemporary umbrella. This year’s show will feature many standout artists, such as Ken Nwadiogbu’s The Migrant, Carlos and Jason Sanchez’s Tempest, Scope’s monumental digital obelisk curated by ArtRepublic and Superchief Gallery NFT, and a fabulous entrance activation by Tomislav Topic.

Lauren: Any exciting, highly-anticipated or unique exhibitors you’d like to touch on?

Lauren: Do you have any tips or suggestions for shopping art shows?

Hubshman: Unlike online auctions, art fairs offer a real-time survey of up-to-date information on the current art market. We embrace our role in systematically building up the galleries we showcase. It has been gratifying to watch the evolution of an instinct and how we continue to inspire our base of collectors with creative cross-industry VIP programming and monumental sponsorship activations. To compliment our dominating physical presence on the sands of Miami Beach, we partner with sponsors, partners, and strategic media outlets to curate this larger-than-life show. We find that in merging these worlds, we allow our guests to customize their Scope experience.

The conversation has been edited and condensed for clarity.