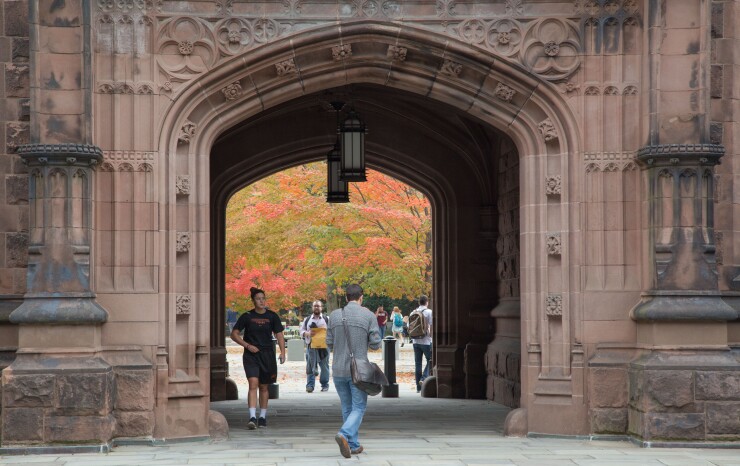 The U.S. higher education sector is pressured by declining enrollment and inflation-adjusted tuition revenue declines, according to Moody’s Investors Service and Fitch Ratings.

In the current fiscal year median enrollment is expected to decline by 0.4% for private universities and by 1.3% for public ones compared to the preceding fiscal year, said Moody’s Senior Credit Officer Michael Osborn and three other analysts in a report.

Moody’s released its report Wednesday while Fitch’s is from September.

Private and public university net tuition is projected to rise by a median 2% in the current fiscal year, the Moody’s report said. That is well under the 7.7% annual inflation level reported by the U.S. Department of Labor in November for the 12 months that ended in October.

“Tuition increased at well-above inflation levels for many years previously,” said John Hallacy, president of John Hallacy Consulting. “It is somewhat difficult to believe that tuition will grow at only around 2% with inflation at 7.7% currently.”

Howard Cure, director of municipal bond research at Evercore Wealth Management, also noted schools had increased tuition beyond inflation in recent years. “The question remains how long … institutions can keep [their] tuition and fees below the inflation rate and what expense pressures will these colleges face as far as demands for salary increases, costs of operations and capital construction projects. This is where a strong balance sheet/endowment plays an important role.”

While more than 50% of the universities Moody’s surveyed said enrollment would be lower in fall 2022 compared to fall 2018, the figure was over 60% for universities in the Midwest, and over 80% of those universities rated Baa or below.

“While all regions show signs of enrollment stress, public universities in the South and West continue to demonstrate greater ability to grow net tuition revenue than their Midwest and Northeast peers,” the Moody’s group said.

Hallacy offered a ray of hope for higher education enrollment: “one of the first questions asked by employers is whether or not there is some kind of college degree. I do not see this trend abating.”

After schools’ endowments and investments had years of growth, “fixed income and equity markets have taken huge hits over the last year,” Cure said. “What does that mean for pressure to increase the spending rate of the endowment? What has been the trend of spending rate? Also, what impact does that have on gift giving since fundraising often includes direct transfers of stocks and bonds?”

It upgraded A.T Still University (Missouri) to A from A-minus.