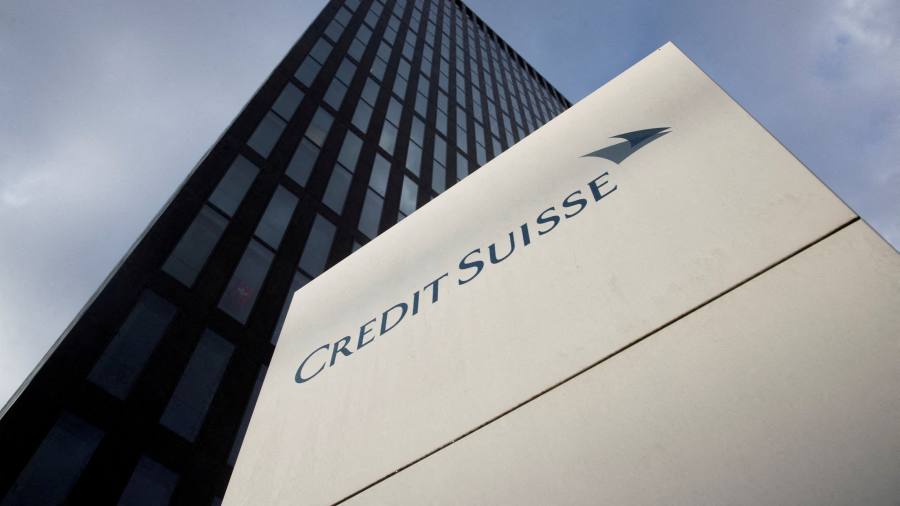 Credit Suisse has forecast a pre-tax loss of up to SFr1.5bn ($1.6bn) in the fourth quarter, with the beleaguered Swiss bank reporting that wealthy clients had withdrawn up to 10 per cent of assets since the start of October.

The lender said that the scale of the client outflows — which followed a string of social media rumours about its financial health — had led the bank to dip into liquidity buffers at the group and legal entity level. Credit Suisse said that it had “fallen below certain legal entity-level regulatory requirements”.

“Credit Suisse began experiencing deposit and net asset outflows in the first two weeks of October 2022 at levels that substantially exceeded the rates incurred in the third quarter of 2022,” the bank said in a statement.

The wealth management division has suffered outflows equivalent to 10 per cent of assets under management at the end of the third quarter, around SFr63.5bn, it added.

JPMorgan analyst Kian Abouhossein warned that “Credit Suisse is not out of the woods yet in terms of stabilising the franchise”.

“Wealth management outflows at 10 per cent of assets under management in the fourth quarter (until 11 November) are very material at a level seen by UBS in the global financial crisis on an annualised basis and not in one quarter.”

The bank’s shares fell 6 per cent in early trading on Wednesday to SF3.62, its lowest price for at least 30 years, having dropped 60 per cent this year.

Credit Suisse is due to hold an emergency shareholder meeting on Wednesday to seek approval for a SFr4bn capital raise to help pay for a radical restructuring of the group.

The Swiss bank said on Wednesday that its wealth management division was likely to post a loss after net interest income took a hit from lower deposits and fees. It also expects the investment bank to make a significant pre-tax loss.

“The massive net outflows in wealth management, Credit Suisse’s core business alongside the Swiss bank, are deeply concerning — even more so as they have not yet reversed,” said Vontobel analyst Andreas Venditti.

“The resulting significant assets under management decline will reduce our revenue and long-term profit estimates. Credit Suisse needs to restore trust as fast as possible — but that is easier said than done.”

The bank also confirmed its capital ratio guidance issued last month, targeting a common equity tier one ratio — a reflection of financial resilience — of more than 13.5 per cent by 2025 and of at least 13 per cent from 2023 to 2025.

Last month, the bank announced its restructuring plan, including carving up and spinning off its investment bank, cutting thousands of jobs and raising $4bn in capital, to help it move on from scandals and a SFr4bn third-quarter loss.

It expected to record a SFr75mn loss on the disposal of its stake in Allfunds Group, the bank added.

Video: Credit Suisse: what next for the crisis-hit bank? | FT Film
This article was originally published by Www.ft.com. Read the original article here.

See which states have suffered the most major weather disasters since 2011
German property market will slow — but no significant correction ahead, central bank says
Deal to divvy up NFL Rams’ settlement sets stage for spending decisions
Sale of Oklahoma senior living facilities sought in bankruptcy
November on pace for best month since 1986