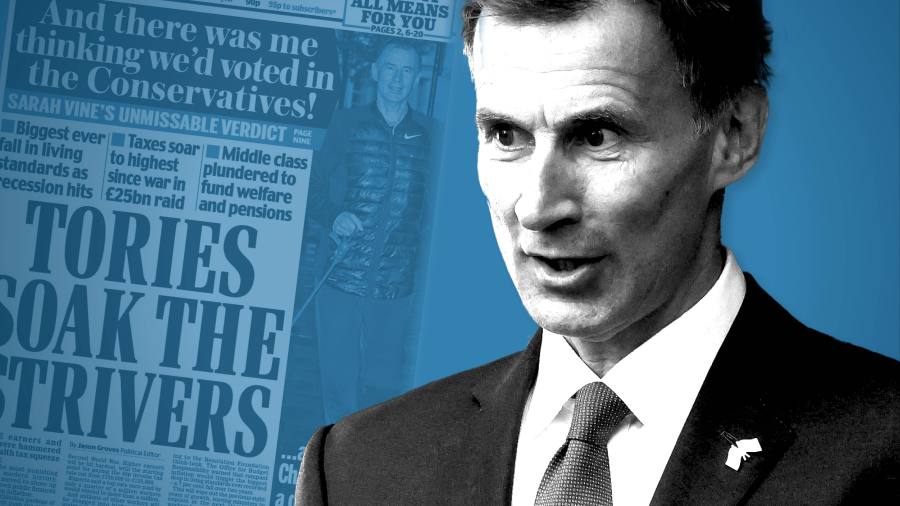 UK chancellor Jeremy Hunt confronted a backlash from Tory MPs angry at a new era of high taxation even as the IMF hailed his efforts to restore the country’s fiscal credibility.

On a day that two leading think-tanks said that high taxes had arrived for good and that wages were set for their most prolonged period of stagnation since the 19th century, Hunt insisted that his £55bn fiscal squeeze was “fair”.

But Tory MPs hit out at Thursday’s £25bn in tax rises, which take Britain’s taxation burden to 37.1 per cent of economic output, the highest since the second world war.

David Jones, former Welsh secretary, said the prospects of the Tory party winning the next election “are going to become more remote” if the plan to increase taxes remained in force.

Citing traditional Tory arguments about the impact on incentives and the overall health of the economy, Richard Drax, MP for South Dorset, said increasing taxes “risks stifling growth and productivity”.

The rapid switch from the unfunded tax cuts of September’s “mini” Budget to the largest fiscal consolidation since 2010 has unsettled the party’s MPs and supporters, who have become unsure about the economic model the party is now pursuing.

While Hunt insisted that his package was “compassionate” because of measures to protect pensioners and people on benefits, many Tories fear that it will leave swing voters on low and middle incomes exposed.

The IMF’s praise for Hunt’s fiscal statement was in contrast to the fund’s scathing public criticism of Kwasi Kwarteng’s mini-Budget on September 23.

Other economists called for even larger tax increases to avoid swingeing interest rate rises by the Bank of England as it seeks to combat high inflation.

Ben Nabarro, chief UK economist at Citi, said Hunt’s measures were “the bare minimum” necessary to restore the UK’s fiscal credibility and were not enough to prevent the BoE further raising interest rates.

He said the BoE could increase rates from the current 3 per cent to 4.25 per cent.

Hunt has insisted to Tory MPs that his Autumn Statement can help deliver victory in a general election expected in 2024 because it will restore faith in the party’s ability to run the economy.

“A Tory election victory is underpriced,” one colleague of Hunt said. “If you saw the glum look on Labour faces during the Autumn Statement, you could see it was not what they were expecting.”

Sunak maintains that the next election can be won but only if Tory MPs show discipline and back the new economic strategy, according to his allies.

The prospect of a recession, falling house prices, rising unemployment, high inflation and higher mortgage rates over the next 12 months will be a major test of the party’s nerve.

“The truth is we just got a lot poorer . . We are in for a long, hard, unpleasant journey,” said Paul Johnson, director of the Institute for Fiscal Studies, which argued on Friday that higher taxes were almost certainly “here to stay”.

The Resolution Foundation, another think-tank, added that British workers were “living through a two-decade wage stagnation”, with average real wages not set to regain their 2008 levels until 2027.

Such a prolonged stagnation in real wages has not been experienced in this country since the 1820s, according to figures calculated by the Financial Times.