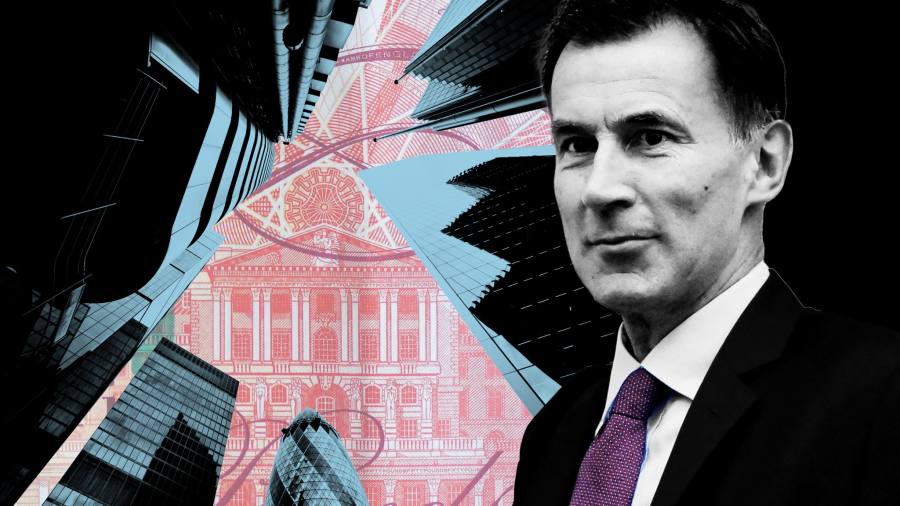 Jeremy Hunt, chancellor, will on Thursday seek to restore Britain’s tarnished economic reputation with a £54bn package of spending cuts and tax rises intended to repair the public finances and tame inflation. “We will face into the storm,” he will say.

Hunt’s Autumn Statement will intensify the financial hardship facing millions of Britons and begin years of austerity in public services, with around £30bn of spending cuts and £24bn of tax rises, according to people briefed on the plan.

But the chancellor will claim the pain is necessary to curb soaring prices and restore faith in Britain, following the market turmoil that engulfed Kwasi Kwarteng’s disastrous tax-cutting mini-Budget on September 23.

While Hunt will insist that taming inflation is the ultimate “growth strategy”, the chancellor will also announce a crucial City of London reform intended to allow insurance firms to release billions of pounds of capital to invest in green energy and other infrastructure projects.

The reform of EU “Solvency II” rules comes at the end of months of tense negotiations between the Treasury and the Bank of England, which feared that looser capital rules could make the sector less safe. A number of sources told the Financial Times a compromise had been reached.

The focal point of the Autumn Statement will be Hunt’s attempt to control inflation and repair public finances shredded by the Covid-19 crisis, the Ukraine war, years of sluggish growth and rising debt-interest costs.

Andrew Bailey, BoE governor, told MPs the world would be watching to see whether Hunt could undo the additional damage caused by Kwarteng’s ill-fated “plan for growth”, that sent gilt markets into a tailspin.

“We have damaged our reputation internationally,” he told the Commons Treasury committee. “It will take longer to repair that reputation than it will to repair the gilt markets.”

Although gilt yields have stabilised since Hunt replaced Kwarteng at the Treasury — junking most of the “mini” Budget’s measures in the process — global markets are still watching nervously to see what happens next.

Rishi Sunak, prime minister, said at the G20 summit in Indonesia that Britain’s reputation had taken “a knock” and it was vital the government restored “stability and confidence in the United Kingdom’s economy”.

Hunt’s plan is expected to set out a path in which debt will start to fall as a share of GDP at the end of the Office for Budget Responsibility’s five-year forecast period in 2027-28. The opposition Labour party claims the country is facing “austerity 2.0”.

Hunt’s package will see tax rises across the board, but those with the “broadest shoulders” will pay most. Millions more people will pay the 45p top rate of tax and levies on capital gains and dividends will rise.

A freeze on income tax allowances and thresholds will see steep “stealth” tax increases after an expected general election in 2024, while Hunt will pencil in sharp cuts in public spending in the next parliament.

The chancellor will claim that he is being “honest about the challenges and fair in our solutions” and will pledge to “protect the vulnerable, because to be British is to be compassionate”.

He is expected to uprate pensions, benefits and the minimum wage in line with inflation next April, based on September’s figure of 10.1 per cent. On Wednesday the October rate of price rises hit 11.1 per cent, a 41-year high.

Treasury officials refused to comment on suggestions from people close to the process that while public spending overall will be squeezed, spending on social care could rise, helping to unblock beds in overcrowded hospitals. Hunt will also set out a major programme to boost the energy efficiency of homes.

The chancellor will also extend extra help to the most vulnerable with their energy bills from next April and to cap average bills for all households at about £3,000, compared with a predicted cap of £4,000.

But Michael Lewis, chief executive of Eon UK, warned: “A ‘squeezed middle’ of homes and businesses faces serious energy debt without support from April 2023 — our analysis suggests almost two-thirds of people face going into debt on their energy bills.”

Although most of the Autumn Statement will focus on the inflation and fiscal crises, Hunt will announce the Treasury has finally agreed a deal with the BoE’s Prudential Regulation Authority to overhaul Solvency II rules.

The chancellor will claim that the changes exploit the regulatory freedom offered by Brexit and will help the City boost growth, although the EU has already begun reforming the insurance rules itself.

Treasury insiders and some senior City figures say the deal with the BoE on Solvency II is part of a “wider discussion” that could see the Treasury drop its plan to give ministers a “power of intervention” to over-rule City regulators.

The Treasury declined to comment, but Bailey stepped up his attack on the idea on Wednesday: “I am concerned about it — yes I am,” he said.

He called for a continuation of the current regulatory system where parliament legislates, the chancellor sets regulators a remit and then they get on will delivering that regulation. The call-in power, Bailey said, “muddies the water”.