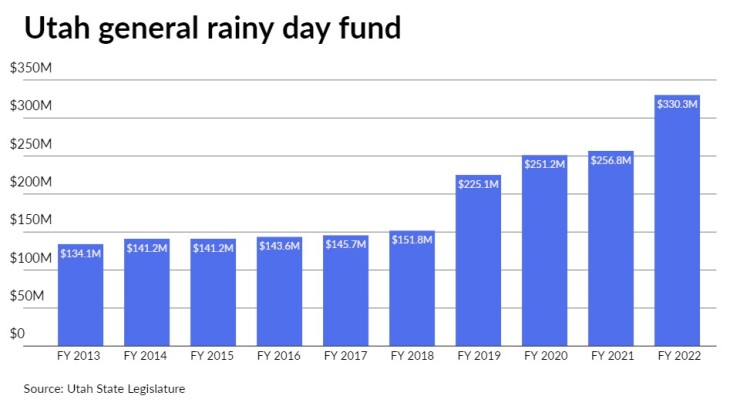 Utah ended fiscal 2022 with a $1.365 billion revenue surplus and most of its budgetary reserve funds at their highest levels since at least fiscal 2013 as the state mulls safeguards in the event of a future decrease in federal funding.

Gov. Spencer Cox and legislative leaders announced Tuesday the legislature will have an additional $130.2 million in the general fund and $1.235 billion in the income tax fund to appropriate during the 2023 session.

“Many anomalies, including unparalleled federal funding, have led to surplus revenue,” they said in a statement. “We remain committed to fiscal responsibility as we seek to fund projects that will serve our state now and for generations to come.”

Federal funding, which accounts for the largest portion of Utah’s revenue stream, was around 27% of the budget before jumping to 34% in fiscal 2022 with the influx of COVID-19 pandemic relief, according to Jonathan Ball, the state’s legislative fiscal analyst who said it decreased to 29% in the current fiscal year.

He told the legislature’s Federalism Commission on Tuesday growth in U.S. debt could start to squeeze out federal discretionary spending, making it harder to bail out states in the event of an economic downturn.

“Over time, the federal government’s going to be less and less willing to provide states with assistance,” Ball said.

At $330.3 million, the general rainy day fund is at its highest level since at least 2013 as is the Medicaid rainy day fund, which totals nearly $114 million, according to legislative data.

Utah’s first-ever debt affordability study released by State Treasurer Marlo Oaks earlier this month said while pay-as-you-go should remain the primary and preferred funding method for the triple-A-rated state, an economic recession could lead to increased use of debt to fund capital projects.

How low can the Bitcoin price go?
Is The Bay Area Housing Market Cooling Off?
November job growth slowed but will still show strength despite layoffs, hiring freezes
Qatar reviews investments in London after ad ban on buses and Tube
Blackstone limits withdrawals at $125bn property fund as investors rush to exit