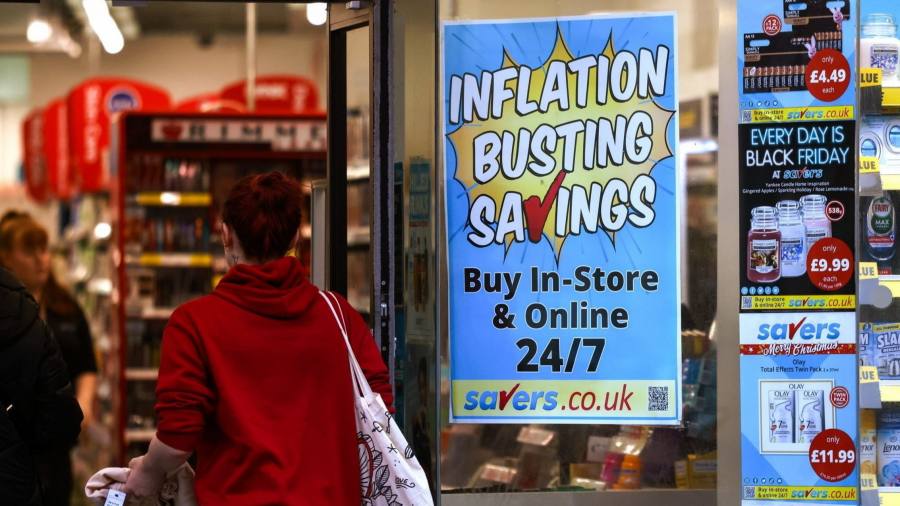 The UK’s rate of inflation hit a fresh 41-year high in October, accelerating to 11.1 per cent on the back of rising energy and food prices.

The Office for National Statistics said the rate rose from 10.1 per cent in September, putting inflation at its highest level since October 1981. Economists polled by Reuters had expected a rate of 10.7 per cent.

The surprisingly high rise in prices in October presents a difficult backdrop for chancellor Jeremy Hunt’s Autumn Statement on Thursday and suggests the Bank of England will have to raise interest rates further to bring inflation down to its 2 per cent target.

In October, the sharp rise in the cost of living was caused by higher gas, electricity and food prices despite the government’s energy price guarantee, which capped bills for gas and electricity at £2,500 for a household with average usage of both fuels.

Food price inflation rose sharply to 16.5 per cent on an annual basis, the highest for 45 years, according to the ONS.

Grant Fitzner, chief ONS economist, said: “Over the past year, gas prices have climbed nearly 130 per cent while electricity has risen by around 66 per cent.”

The one relatively bright spot in the figures was that core inflation, excluding food and energy, held steady at 6.5 per cent in October, the same rate as in September. Economists had been hoping, however, this measure would dip to 6.4 per cent in October.

Hunt blamed Russia’s war in Ukraine for the deepening cost of living crisis, but pledged to take “tough but necessary decisions on tax and spending” in the Autumn Statement to help bring inflation down.

“We cannot have long-term, sustainable growth with high inflation. Tomorrow I will set out a plan to get debt falling, deliver stability, and drive down inflation while protecting the most vulnerable,” Hunt said.

The UK’s rate of inflation was similar to many other G7 countries and is no longer the highest — Italy’s rate hit 12.8 per cent in October.

Economists thought the UK rate might have peaked and could fall in the months ahead, although they warned that any decline was likely to be slow.

“The combination of weaker growth and the waning impact of global supply shocks could lead to easing price pressures. Nevertheless, inflation could stay above the Bank of England’s 2 per target until the middle of 2024,” she said.

Mike Bell, global market strategist at JPMorgan Asset Management, said the rise in inflation to top 11 per cent did not tally with the BoE’s message earlier this month that interest rates needed to rise only modestly further from the current 3 per cent rate to bring inflation down.

“Until it is clear weaker activity is starting to weigh on wage demands, we believe the Bank of England will have to keep hiking. We see UK rates peaking at 4.5 per cent,” he said.

The main moderating force in the inflation figures was a decline in motor fuel inflation in October, where prices were 22.2 per cent higher than a year earlier, down from an inflation rate of 26.5 per cent in September.

But the statistical agency noted that petrol prices fell 2.9p a litre during the month while diesel prices rose by 2.3p a litre. This highly unusual divergence, it said, was the largest on record and speculated that “this could be a consequence of a surge in global demand for diesel for electricity production”.