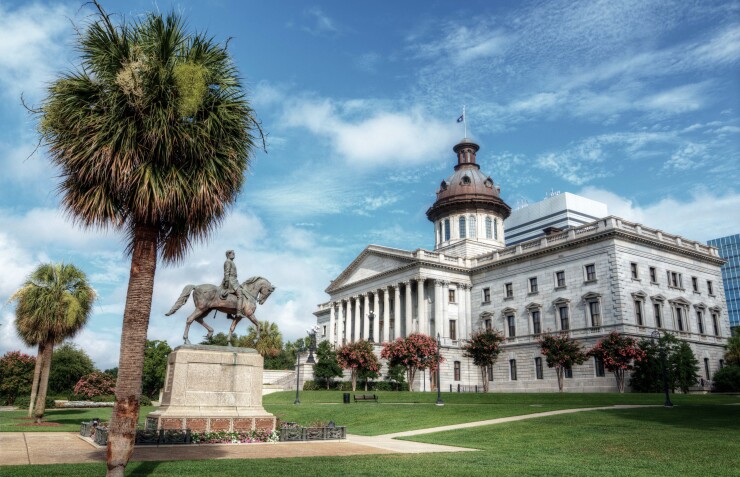 Both, passed with just over 60% of the popular vote,amendthe state’s constitution..

The first ballot measure requires annual contributions to the General Reserve Fund to increase to 7% of the previous year’s revenue from the current rate of 5%, to be carried out incrementally over the next few years.

The increase in funds “significantly improves the state’s ability to address unanticipated revenue declines,” said Moody’s Investors Service in a recent commentary, helping to hedge against unexpected budget shortfalls and amounting to a net credit positive for South Carolina.

“Such funds are more enduring than other year-end fund balances and therefore they should provide a more reliable source of flexibility to address revenue downturns,” Moody’s said.

Like many states, South Carolina relied on its reserves to replace the loss of vital revenue streams, and has since directed millions towards beefing it back up. It currently stands at $732 million.

The approved changes increase the state’s contribution rate to the CRF to 3% of the previous year’s revenue from 2% starting next fiscal year.

Along with giving local authorities year-round access to dedicated infrastructure funds, the CRF also acts as a cushion for the GRF, and can be drawn down on should the state find itself unexpectedly short funds for its required contributions.

The two amendments were referred to voters by the state legislature.

South Carolina’s has approximately $1.2 billion in dedicated rainy-day funds today, according to the Pew Research Trust.

That equates to roughly enough funding to keep the government operational for a total of 45 days in an emergency, marking a steep decline from pre-pandemic highs.

The state set about beefing up its rainy day accounts in 2018, according to Pew, increasing contribution rates from 6% of total spending to 20.3% over the following two years. In fiscal year 2021, it reserves stood at record $1.7 billion.

During the pandemic, South Carolina, like many other states, leaned heavily on reserves to replace traditional revenue streams that dried up during the economic crunch.

The state drew down half-a-billion dollars from reserves to plug budgetary holes, effectively erasing the two years of progress in a handful of months.

It has since rebounded, benefitting not only from the ballot reforms, but a $52.3 million influx into reserves green-lit by the state’s lawmakers recently.

Thirty-one other states have also marked increases in reserve rates following the pandemic, according to Pew.

Much of that progress can be linked to COVID-era federal stimulus support, Pew said, as well as better-than-expected tax hauls over the last few years, the affects of which are only temporary.

“Budget surpluses and related gains in states’ rainy day funds during fiscal years 2021 and 2022 are not expected to continue to the same degree in fiscal 2023,” Pew said. “Policymakers now face an inflection point as they reckon with several looming challenges, including weakening economic growth amid tightening monetary policy and historically high inflation, and a tapering of federal aid.”

A US Senate hearing will discuss FTX, New York bans proof-of-work and FTX evaluates its assets: Hodler’s Digest, Nov. 20-26
Qatar reviews investments in London after ad ban on buses and Tube
FTX resumes paying staff and contractors after weeks in limbo
UK house prices fall at fastest pace since June 2020
What is an Ethereum Virtual Machine (EVM) and how does it work?