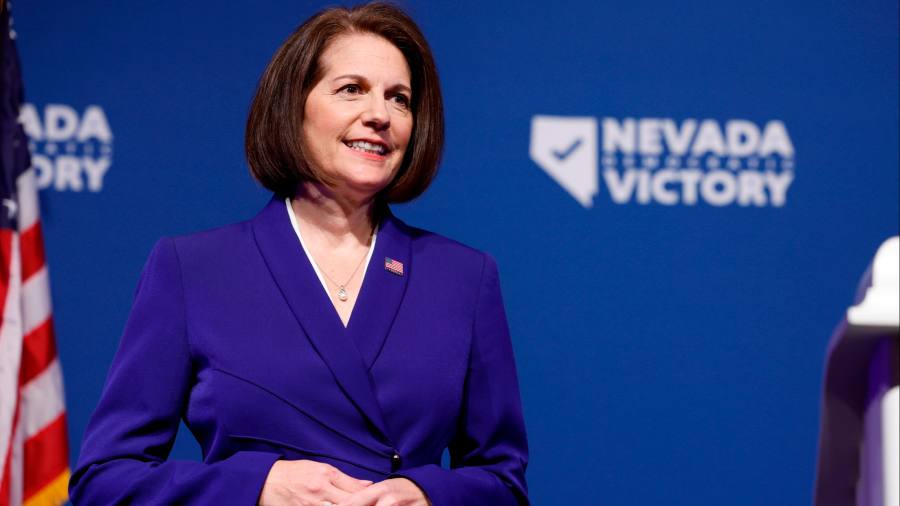 Democrats will retain a majority in the US Senate in a big boost to Joe Biden’s presidency after Catherine Cortez Masto won re-election in Nevada.

According to the Associated Press, Cortez Masto is projected to win her contest against Republican candidate Adam Laxalt, in one of the most competitive races of the midterm elections.

Cortez Masto’s victory gave Democrats their 50th seat out of 100, enough to hold the majority given that Kamala Harris, the vice-president, can cast tiebreaking votes. It came after Democrat Mark Kelly won re-election in Arizona over Trump-backed Republican candidate Blake Masters.

The Nevada result means that a run-off set for December 6 in Georgia between Raphael Warnock, the incumbent Democrat, and Herschel Walker, the former American football star running as a Republican, will no longer be crucial in determining the majority but could offer Democrats a margin of one extra vote to pass legislation.

Keeping a Democratic edge in the Senate is vital for President Joe Biden as it will allow his party to approve judicial nominations, executive branch appointments and set the legislative agenda even if Republicans gain control of the House of Representatives. Although Senate control was always considered a toss-up, Cortez Masto has long been considered one of the Democrats’ most vulnerable incumbents.

Speaking to reporters in Cambodia on Sunday, where he was attending the Asean summit, Biden said he was “incredibly pleased”. “I feel good, and I’m looking forward to the next couple of years,” he said.

“This election is a victory. A victory and a vindication: for Democrats, our agenda, and for the American people”, Chuck Schumer, the Senate majority leader said. “The American people rejected the anti-democratic extremist Maga Republicans,” he added, referring to candidates allied with former president Donald Trump.

Laxalt’s defeat marks the latest disappointment for Republicans who were hoping to make sweeping gains in the midterm elections. But they underperformed as voters worried as much about losing abortion rights and basic democratic values as they did about punishing Democrats for high prices.

Republicans are struggling to reach the threshold of 218 votes they need to recapture the House of Representatives, with about 20 races in the lower chamber of Congress yet to be called — suggesting that at most they will have an exceedingly slim majority.

On Saturday, Democrats scored a big upset in a House race in Washington state, when Marie Gluesenkamp Pérez defeated Republican Joe Kent, a Republican aligned with Trump. He had unseated Jaime Herrera Beutler, a Republican congresswoman who had voted to impeach Trump after the assault on the Capitol on January 6 last year.

The Republican failure to make big gains in the midterm elections has triggered a surge of infighting between factions close to party leaders in Congress and those tied to Trump.

In the Senate, a group of Republicans supportive of Trump has asked to postpone leadership elections until after the Georgia run-off, which could threaten Mitch McConnell, the longtime Republican leader in the upper chamber of Congress.

“The old party is dead. Time to bury it. Build something new,” Josh Hawley, the Republican senator from Missouri aligned with Trump, tweeted after Laxalt’s defeat was called by the AP.

Republicans notched up one big gain in Nevada when Joe Lombardo, the sheriff of Clark County, which includes Las Vegas, won the governor’s race. But Jim Marchant, its candidate for secretary of state, was defeated after being criticised for questioning the outcome of the 2020 election.

In Arizona, Mark Finchem, who has attacked Biden’s win over Trump as “illegitimate”, also lost his contest to be secretary of state, which oversees elections, to the Democrat Adrian Fontes.

The outcome of the Arizona governor’s race pitting Kari Lake, a Trump-backed former television news anchor, with Katie Hobbs, the Democratic candidate, was still too close to call, though Hobbs maintained a lead as of Saturday evening.