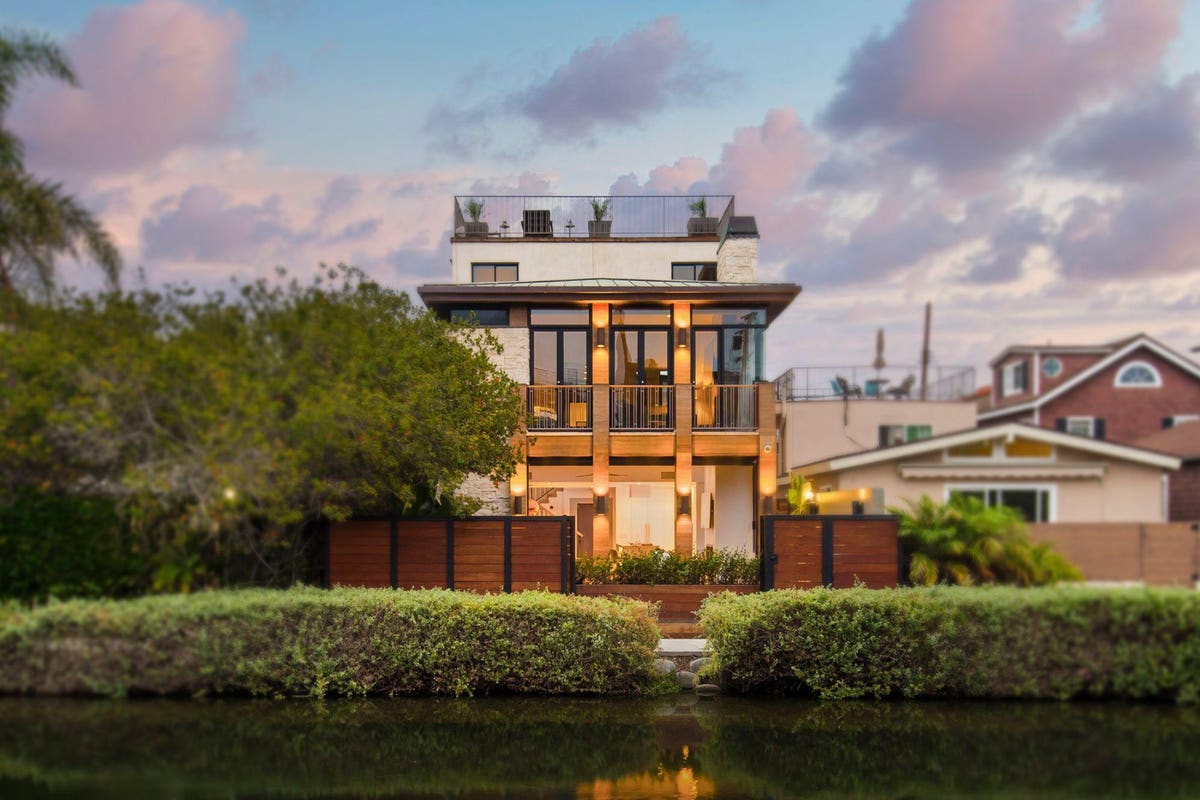 In 1905, developer Abbot Kinney sought to capture the magic of Venice, Italy, by building a series of canals on the southern coast of California in what was then known as Ocean Park. But with the dawning of the age of the automobile in the 1920s and the obsoletion of the canals allowing them to fall into disrepair, it seemed that “Venice of America” would never come to fruition.

Fast forward to today, however, and you will find that Kinney’s dream is very much alive and well.

Having been renovated and reopened in 1993, the Venice Canal Historic District in the popular seaside Los Angeles neighborhood of Venice, California, has become the site of some of the most distinguished and spectacular homes in the country. Now with the listing of 2308 Grand Canal, a piece of this “European California” canal is up for grabs.

Tucked away along the slow-moving Grand Canal that leads to the marina, the four-bedroom, five-bathroom residence has something not all Venice Canal homes have—a western-facing orientation.

With just two of the canals (Grand and Eastern) running north-to-south, only a select number of these properties in the area face west, making the home one of an extremely rare supply.

At one time owned by “South Park” co-creator Trey Parker, the seaside house was built in 2010 when it sold for $3.25 million before selling to Parker in 2016 for $4.3 million. The codeveloper of “The Book of Mormon” then went on to sell the house three years ago for $5.55 million.

Now priced at just under $7 million, the listing is held by one of L.A.’s top luxury real estate agents, Paul Salazar of Beverly Hills-based Hilton & Hyland, who says that another main selling point apart from the excellent sun exposure is the floor-to-ceiling Fleetwood pocket sliders that allow for indoor-outdoor living.

“This community is very tight—they love to have neighbors over and to entertain,” Salazar says. “Having a natural flow from indoor living spaces to this incredible entertainer’s backyard is perfect for just that.”

Along with a motorized gate for views of the canal or for privacy, the backyard comes replete with amenities, such as a stainless-steel jetted hot tub, a daybed and an outdoor kitchen with a commercial-grade wok range, a Sub-Zero refrigerator and two Sub-Zero freezer drawers.

On the roof, a sprawling deck offers 360-degree views. “The rooftop deck is huge—around 500 square feet, or around the size of a New York apartment, which isn’t saying much for an apartment but for a deck is tremendous,” Salazar says. “You get views of the Hollywood Sign, the Santa Monica Mountains and the Pacific Ocean.”

Hilton & Hyland is an exclusive member of Forbes Global Properties, a consumer marketplace and membership network of elite brokerages selling the world’s most luxurious homes.