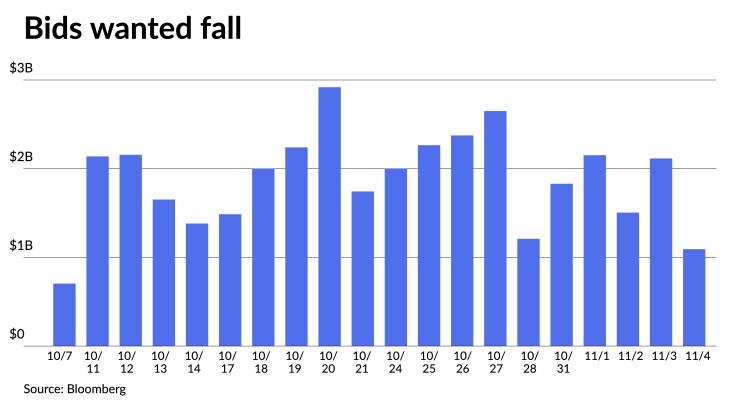 Municipals were little changed and lightly traded ahead of the midterm elections while U.S. Treasuries were weaker across the curve and equities improved.

Triple-A yields were little changed to a basis point or two firmer 10 years and out while the U.S. Treasury two-year climbed to another high not seen since 2007.

Voters will decide on more than $60 billion of bond ballot measures Tuesday with New York voters faced with the largest amount at $4.2 billion.

“Many issuers decided to take a pause in issuing last week due to the Fed rate hike decision as many expected the Fed to raise rates by 75 basis points,” said Jason Wong, vice president of municipals at AmeriVet Securities.

And “given the low new-issue supply and the FOMC meeting last week, it is not surprising that trading volume slowed from the pace of the last several weeks,” said CreditSights strategists Pat Luby and John Ceffalio.

The average daily par amount reported by Municipal Securities Rulemaking Board was down 18% from the week ended Oct. 28, they noted.

Wong said “supply is not expected to pick up anytime soon as we have Veterans day on Friday and the Thanksgiving holiday coming a few weeks later.”

Last week, “the major news on the municipal side was not constructive,” Tom Kozlik, managing director head of municipal research and analytics at HilltopSecurities, said. “The Fed’s outlook, the fund outflows, and jobs number all point to more uncertainty, volatility and higher interest rates most likely.”

Kozlik said activity is likely to keep interest rates higher for a longer period and that is going to keep refunding activity very low.

He said there will be many barriers to issuance, bringing monthly volume to record levels. “Supply is going to be very, very low for November and December,” he said.

“We will probably see the lowest levels of issuance in those months that we have seen for some time,” Kozlik added, pointing to high rates, Fed activity, project costs, election year impact, and inflation.

“During the last few weeks, we have also noticed that transactions that were perceived by investors as having greater incremental risk when compared to their published credit rating, priced more consistently with lower-rated deals,” she said.

Additionally, Kozlik spoke of the presence of “an immense amount of sticker shock” where tax-exempt yields and overall debt costs right now is forcing many issuers to stay out of the market.

“The tone is one of disbelief for some,” Kozlik said, acknowledging the swift rise in yields this year.

“The upcoming midterm elections will have a major impact on future federal and state policy decisions, yet we expect limited impact on the municipal market and municipal credit quality,” CreditSights strategists said.

They said a “change in control of Congress would have a limited impact on municipal credit quality.”

Edward Moya, a senior market analyst at OANDA, said that “the democratic lock on Congress is likely coming to an end.”

A divided government “means we won’t be seeing a big fiscal stimulus response next year when the economy is in a recession,” he said.

Investors, though, are so fixated with this week’s inflation data instead of the midterm election “that it seems highly likely the Republicans will win one of the chambers this week,” he noted.

A Republican takeover “would reduce the chance of future emergency or stimulus-type aid to state and local governments, but this is not proposed at this point anyway,” CreditSights strategists said.

If Republicans take both houses of Congress, they “expect they’ll attempt to extend major provisions of the 2017 [Tax Cuts and Jobs Act] (including the limit on SALT deductions), but those would need to be negotiated with the President.”

If the Republicans win one or both houses, they worry “about a destabilizing debt ceiling crisis, which would have far-reaching impacts well beyond municipals.”

Even if the Republicans win both the House and Senate, Moya said “the bullish reaction for risky assets might be short-lived.”

A Republican sweep would confirm that the market “won’t see a major fiscal response from the Biden administration once the economy falls into a recession,” he said.

The state also is set to sell $549.545 million of taxable general obligation bonds (Bid Group B) at noon Wednesday.

The Florida Department of Transportation (Aa2/AA/AA/) is set to sell $189.190 million of turnpike revenue bonds, Series 2022C, at noon Tuesday.

US steps up pressure on European allies to harden China stance
For Emily Dickinson’s Birthday, Visit Her New England Home
November job growth slowed but will still show strength despite layoffs, hiring freezes
21 Unique Holiday Gifts For The Home To Give To Everyone On Your List
Trading Strategy with Support & Resistance: Where to Buy / Sell and Set Stops