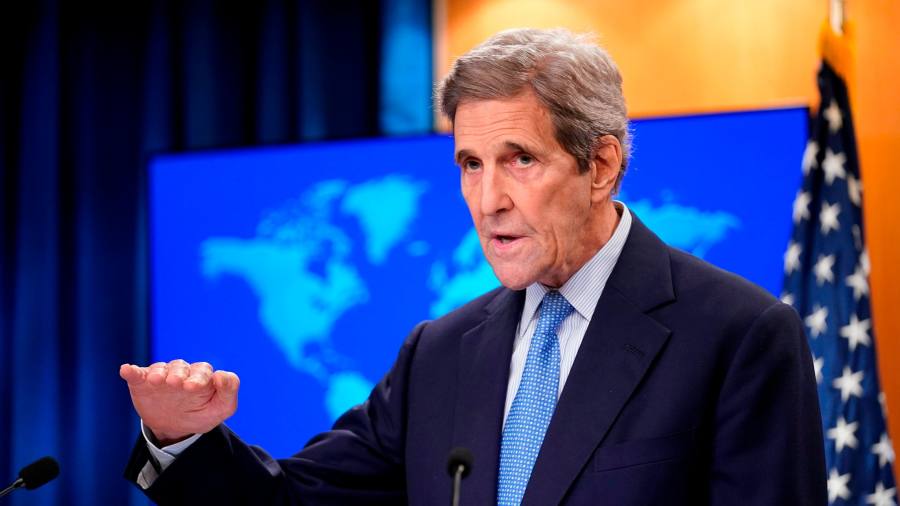 The US is working on a plan to harness cash from the world’s largest companies to help developing countries cut their use of fossil fuels, an idea it aims to unveil at the UN climate summit this week.

US president Joe Biden’s climate envoy John Kerry is trying to marshal support from other governments, companies and climate experts to develop a new framework for carbon credits to be sold to business. The proceeds could then fund new clean energy projects.

Under the potentially transformational plans, regional governments or state bodies would earn carbon credits by reducing their power sector’s emissions as fossil fuel infrastructure such as coal-fired plants were cut and renewable energy increased.

The credits would be certified by an independent, as-yet unspecified, accreditation body. Companies would then be able to buy the credits to offset their own carbon emissions.

Although the scheme would be voluntary, Kerry said recently that he hoped the private sector could be “enticed” to the table because it would offer the most-polluting companies a way of addressing their emissions.

Kerry and the US administration want to unveil the idea at the COP27 climate summit in Egypt, according to people familiar with the matter. More than 110 heads of state are expected at COP27, which got under way on Sunday.

World leaders are scrambling to fund the shift to clean energy and reduce developing countries’ dependence on fossil fuels.

US officials hope the plan will combat global warming by unlocking “tens of billions” of private capital to fund the energy transition in emerging economies, according to a person familiar with the discussions.

The use and trading of carbon credits is unregulated and a controversial solution to global warming. In theory, one credit represents one tonne of carbon avoided or removed from the atmosphere, but critics say they do not always deliver the emissions savings they promise.

However, the concept has boomed as companies and countries come under pressure to cut their emissions and meet net zero emissions targets, which are legally binding under the Paris climate agreement.

Several industry groups are working to develop standards in an effort to bring more credibility to carbon credits, and regulators including the US Commodity Futures Trading Commission have been asked to monitor the market.

US officials said they would engage closely with all stakeholders on safeguards to ensure the environmental integrity of the credits.

The system being devised by the US team is billed as a power-sector version of the so-called Lowering Emissions by Accelerating Forest Finance (Leaf) venture launched at last year’s COP26, backed by companies including Amazon, BCG and Nestlé, people familiar with the plans said. Under this scheme, credits are linked to the avoidance of deforestation in countries such as Brazil and Indonesia.

However, the US proposal lacked detail, the people said. Carbon credits were not “the kind of thing you can have half-baked. The rules matter, the details matter,” said one person familiar with the plans. “There’s no easier way to get people angry than to throw offsets into the mix.”

Another person familiar with the plans said the US state department and external partners were aiming to introduce the broad framework and would take further time to develop the full details.

“One of the things we’re looking at is the possibility of the private sector, in effect, being enticed to the table,” Kerry said last month. Funds could go “directly into closing down some coal plants and acquiring renewables, which is direct emissions reduction. I hope perhaps even by Sharm el-Sheikh we might be in a position to outline that,” he said.

Qatar reviews investments in London after ad ban on buses and Tube
Top Wall Street analysts say buy these stocks during a market downturn
US steps up pressure on European allies to harden China stance
November job growth slowed but will still show strength despite layoffs, hiring freezes
Do Treasury Bond ETFs Deserve a Place in Your Portfolio?