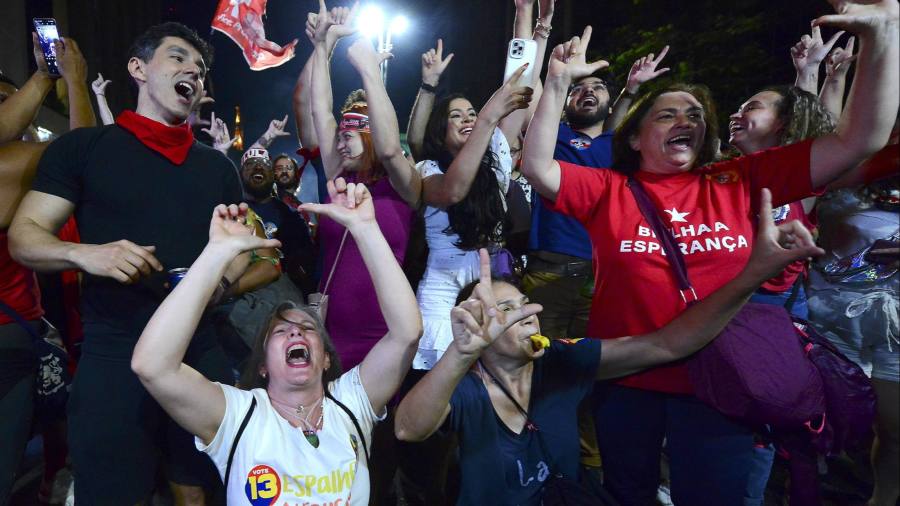 The tight result tops off a dramatic comeback for the 77-year-old opposition leader, who served two terms as president between 2003 and 2010 but subsequently was accused of corruption and served time in prison for graft before his convictions were annulled.

“From January 2023, I will govern for 215mn Brazilians, not just those who voted for me. We are one people, one country, one great nation,” said Lula in a speech that focused on democracy and the importance of giving Brazilians a dignified life.

“We no longer want to fight. We’re tired of seeing the other as the enemy.”

Lula’s supporters shouted his name from apartment windows, honked horns and let off fireworks as the count drew to an end. His election is the latest in a string of races that have turfed out incumbent governments across Latin America, returning mainly leftwing leaders.

Lula’s win follows a bitter campaign marred by fake news and violence in an atmosphere of polarisation, leading to concerns of post-election conflict.

After a tense vote count, supporters of the one-time metalworker from Brazil’s impoverished north-east took to the streets in celebration, revelling in the end of a long campaign and the left’s return to power after four years of conservative populism under Bolsonaro.

On Paulista Avenue, the main boulevard through São Paulo, Brazil’s biggest city, supporters clad in the red of Lula’s Workers’ party broke into song and chants of his name.

“This is the most important election I’ve taken part in,” said Brenda Santos Cunha, a publicist from São Paulo. “The last few years have been barbaric, it has been maddening. I don’t expect Lula’s government to be revolutionary, but I hope it will provide an ounce of hope, a moment to breathe.”

Lula won 50.9 per cent of the vote versus 49.1 for Bolsonaro after a cliffhanger three-hour count, followed by millions across the country on television and online. He will take office on January 1 and faces a huge challenge to unite a deeply divided nation.

Bolsonaro did not immediately react to the result.

“It is time to disarm the passions and reach out to opponents,” said Arthur Lira, the speaker of the lower House of Congress and a close Bolsonaro ally. “Everything that will be done from now on has a principle — to pacify the country and bring quality of life to the Brazilian people.”

“We cannot accept revenge or persecution from any side,” he added.

Tathiana Chicarino, a political scientist, said a big challenge for Lula would now be “to deal with the part of the electorate that voted for Bolsonaro, especially his radical base.”

In the run-up to the election, Bolsonaro had persistently claimed Brazil’s electronic ballot machines were vulnerable to fraud, leading opponents to fear he was preparing a justification to reject a losing result.

In recent days the populist leader also claimed that rulings from the country’s electoral court had prejudiced his campaign.

On the campaign trail, Lula focused on the risks to democracy from Bolsonaro’s far-right movement, framing the election as a choice between “democracy and fascism, democracy and barbarism.”

He also took aim at the nation’s high levels of poverty and hunger, saying estimates that 30mn Brazilians suffered from a lack of food were “unacceptable”.

To support his economic plans, Lula has pledged to abolish a constitutional spending cap to allow the government to spend more on social projects and infrastructure. The rhetoric has unnerved some investors, who remain on edge about Brazil’s fiscal position and sceptical about Lula’s commitment to rectitude in the public accounts.

Lula also caused consternation by offering few details on his broader economic agenda and refusing to nominate a finance minister.

It is likely he will move away from the free market vision of the Bolsonaro administration to a model that puts the state at the heart of the economy. But he will take power at a complicated time, with high interest rates and a potential recession in the US and Europe threatening growth.

On the environment, Lula has pledged to end illegal deforestation of the Amazon, following a surge in destruction of the earth’s largest rainforest under Bolsonaro.

“[Lula] will take over the country after Bolsonaro and his group tried to deconstruct most of the public policies that were in place,” said Maria do Socorro Braga, a political scientist at the Federal University of São Carlos. “He will have to lead the country back to democratic stability and try to reduce social inequalities.”

Born in Pernambuco, a poor northeastern state, Lula was a trade union leader in the industrial hub of São Paulo during Brazil’s military dictatorship before entering politics and founding the Workers’ Party, or PT.

After three failed attempts, he won the presidency for the first time in 2003 and served two terms during a heady period of commodities-fuelled growth.

Lula won international acclaim for reducing poverty in one of the world’s most unequal countries.

However, his reputation was tarnished by the Lava Jato corruption scandal that rocked Brazil’s business and political establishment, while the economy fell into a deep recession under his chosen successor, Dilma Rousseff.

Lula served almost two years in prison before his graft charges were annulled by the Supreme Court and the presiding judge in the case deemed biased.

A slate of other cases against him were either shelved or expired due to time limits. The leftwinger has always maintained that the investigations were a political witch hunt.

“Lula represents evil. There’s no other word. He is the one who creates hate, not Bolsonaro,” said Ione Herculano, who voted for Bolsonaro clad in the green and yellow national football jersey.

“Brazil is a rich country but there’s misery and hunger because the PT stole so much money.”

Margareth Saab, another Bolsonaro voter, said she had the same values as the incumbent leader — “family, patriotism and religion.”

Lula’s agenda is likely to face obstacles in Congress, which is broadly right-leaning. The president-elect’s bench of leftwing allies will occupy less than about a quarter of seats in the lower house, meaning he will need to make concessions to pursue his agenda.

Bolsonaro allies will also occupy key governorships, including São Paulo — Brazil’s wealthiest and most populous state — which was won on Sunday by Tarcísio de Freitas of the rightwing Republican party.

“He is only back because he is concerned for his legacy,” said Mario Marconini, managing director at Teneo. “He will have to be a centrist, listening to everyone. His alliances show that he is this way already.”

US president Joe Biden and French counterpart Emmanuel Macron were among the first world leaders to congratulate Lula. Biden highlighted that the elections were “free, fair and credible,” while Macron said Lula’s victory “opens a new page in the history of Brazil”.

US steps up pressure on European allies to harden China stance
21 Unique Holiday Gifts For The Home To Give To Everyone On Your List
Will the Oil and Materials Stocks Rout End in 2016?
How Atlanta’s growing economy burned low-income renters and homebuyers
FTX resumes paying staff and contractors after weeks in limbo