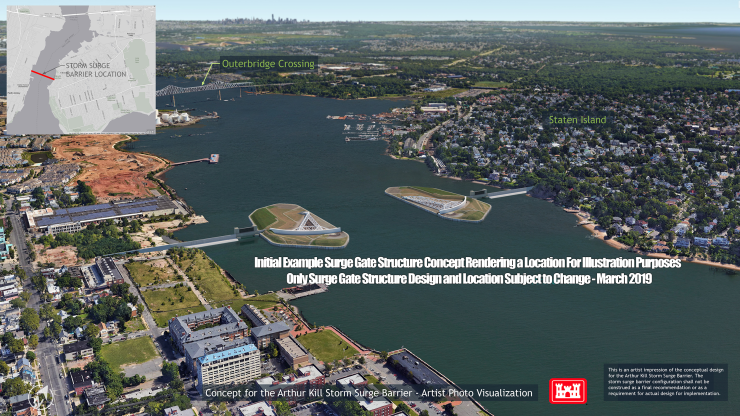 As New York observes the 10th anniversary of Hurricane Sandy this week, the Army Corps of Engineers has unveiled an elaborate flood protection plan it says will protect the nation’s most urbanized area from future storm surges that are expected to become more frequent and intense.

The $52.6 billion design features 12 floating storm surge gates in the waters around New York Harbor, which would close during major storms, combined with systems of shoreline features like sea walls, levees, elevated promenades and flood walls that promise to reshape the waterfronts around lower Manhattan, Brooklyn and Queens, and New Jersey.

The project area encompasses 25 counties in New York and northern New Jersey, more than 900 miles of shoreline and all of New York Harbor’s estuaries and tributaries.

Critics warn the plan does little to address non-storm surge related climate change effects, like rising sea levels and weather change. They say water barriers would also create new flood-prone areas — which the corps acknowledges — and threaten marine life and water quality by, for example, trapping raw sewage in the harbor. Three of the waterways that would have gates are already toxic Superfund sites.

The Corps of Engineers project is the most ambitious of hundreds of coastal protection projects undertaken by the federal government, New York City, states and the Port Authority of New York and New Jersey in the decade since Sandy hit the area in 2012.

New York City Mayor Eric Adams last week broke ground on Brooklyn Bridge-Montgomery Coastal Resilience Project, which will build flood walls and flip-up barriers, one of a series of projects that make up what Adams said is the “single largest urban climate adaption project in the nation.”

The corps’ chosen design “dovetails nicely with the other projects that the corps or states or city are doing to address the area,” Bryce Wisemiller, project manager at the corps’ New York Division, said Thursday night during a virtual public meeting. The design protects roughly 63% of the coastal area, he said, and other local projects are addressing most of the rest of the area, though not for a 100-year storm event like the corps.

Hurricane Sandy struck on Oct. 29, 2012. The largest storm to hit the East Coast, Sandy is now considered the fourth costliest tropical cyclone on record for the U.S. at $81.9 billion in today’s dollars, according to the National Oceanic and Atmospheric Administration.

Though the storm carried winds of up to 85 miles an hour, the real damage came from record storm surges of up to 32 feet in some places that swamped streets, tunnels, buildings, and towns, prompting mass evacuations and knocking out power.

“Hurricane Sandy awakened in a lot of people the understanding that storms were increasing and that the impacts were different and we could not judge a storm by a previous storm,” Luzzatto said. “We were really able to see where we had weaknesses in the system.”

After six years of study, the corps in mid-September released a 550-page draft feasibility report and Tier 1 environmental impact statement detailing what it calls its tentatively selected plan to manage future storm risk. So-called Alternative 3B has a 14-year construction timeline. If approved and funded, construction would begin in 2030.

The design was chosen from a menu of six options that range from no action to a five-mile, $119 billion, five-mile gated seawall between Sandy Hook, New Jersey, and Queens, New York, that invited ridicule from former President Donald Trump, who canceled funding for the study for two years.

The corps is holding a series of public meetings and taking feedback until Jan. 6. A decision on a final design will be made next April and a final report submitted to Congress in mid-2024. Congress would need to approve and fund the project, as would the nonfederal partners including the states of New York and New Jersey.

The Army Corps opted for Alternative 3B in part because it brings the most economic benefits, corps officials said during the Thursday meeting. It’s expected to bring $3.7 billion in annual net benefits by reducing economic damages caused by coastal storms from 2044 to 2093 by an average of $6.2 billion a year, they said.

The design also finds a middle ground between the alternatives, Wisemiller said.

“Having some balance between shore-based measures and harbor measures seemed to be the best,” he said. “The key decision we have now is to keep with our current plan…or go with some other plan.”

Sea gates and barriers that remain open during normal weather and are closed during major storms to protect against surges are already in place in several spots around the country.

The corps built a $14.5 billion system of levees, gates, walls and pumps around New Orleans after 2005’s Hurricane Katrina. There are hurricane barriers in New Bedford, Massachusetts, Providence, Rhode Island, and Stamford, Connecticut. In Texas, the corps is planning the so-called Ike Dike, named after the 2008 Hurricane Ike, a $31 billion proposed coastal barrier to protect the Galveston Bay.

In addition to the barriers and shore-based measures, the plan features structural, nonstructural and nature-based features, some of which are designed to counter flooding that’s expected to be induced by the storm surge barriers.

The four sites that could see induced flooding are Breezy Point, Queens, southern Bronx along Harlem River, Inwood and Kips Bay. In its report, the USACE acknowledges the potential for “limited” induced flooding in these four areas and said its plan has incorporated measures “to mitigate induced flooding.”

The areas that face additional flooding are like “sacrifice zones,” said Sahana Rao, a project attorney at the Natural Resources Defense Council, which prefers one of the alternative plans that does not include any storm gates.

“We’ve seen historically in these kinds of balancing equations, it’s usually the most vulnerable communities that are left open to danger,” Rao said. “They have said they will put additional shoreline measures into place that are supposed to mitigate some of this induced flooding, but we’re still digging into those measures to determine how protective they will actually be.”

The NRDC’s other concerns are whether the barriers will worsen water quality and disrupt marine life, Rao said. New York City has more than 450 combined sewer overflows that pump raw sewage into the harbor when a treatment plant fails, she said. “Will the barriers restrict how the sewage discharge disburses out to sea, trapping sewage in the harbor?”

“It’s such a huge infrastructure undertaking that we want it to be worth it,” she said.

The Waterfront Alliance, a coalition of organizations working to make the region’s waterways and shoreline more resilient, was happy to see Alternative 3B picked over the plan calling for the single massive sea wall, said Tyler Taba, the group’s senior manager for climate policy.

But the coalition wants to see more green infrastructure and nature-based features, and is keeping a particular eye on Jamaica Bay, which has the only true natural ecological wetlands in New York City, Taba said.

“We’re optimistic that the corps is hearing some of the advocacy around green infrastructure and nature-based features,” Taba said, adding that the scale and scope of the project requires more community engagement from the corps.

“There’s been indications from leadership that they want to do a better job of engaging with the community,” Taba said. They “need to develop a strategy so the community can understand this massive project that’s really technical and hard to understand.”

Mortgage Rates Fall As Inflation Eases And Fed Signals Smaller Hikes Ahead
Do Treasury Bond ETFs Deserve a Place in Your Portfolio?
What is an Ethereum Virtual Machine (EVM) and how does it work?
See which states have suffered the most major weather disasters since 2011
Ethereum derivatives look bearish, but traders believe the ETH bottom is in