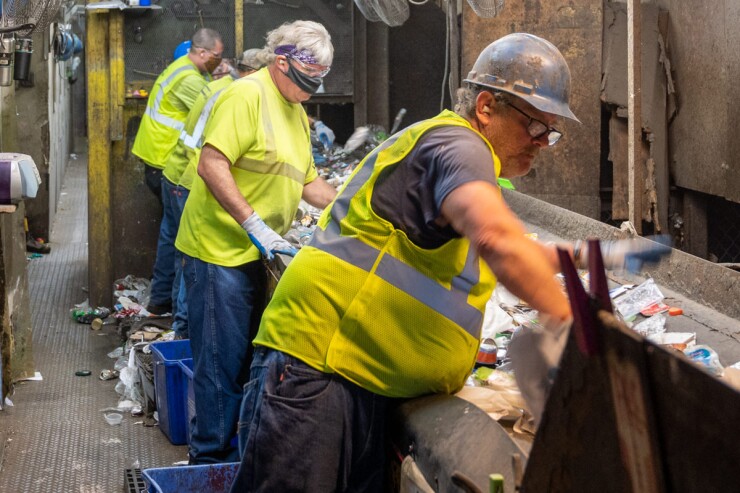 On Nov. 8, voters in Chittenden County, Vermont, will decide on a $22 million bond measure local officials say is necessary replace the area’s aging recycling plant and to future-proof its waste infrastructure.

The existing plant is technologically outdated, said the board chair of the Chittenden Solid Waste District, Paul Ruess, and straining to meet new environmental standards, as well as the needs of the area’s 165,000 residents.

“This facility is nearly 30 years old,” Ruess said in a statement given to local media outlets urging voters to approve the bond measure. “Believe it or not, much of the material is sorted by hand, hardly necessary in today’s world where much more efficient technology exists.”

The measure would authorize the district, which encompasses the state’s most populous county and its largest city, Burlington, to issue $22 million of bonds backed by district revenue.

According to a CSWD report, the current facility can’t handle the many different types of recyclable waste produced by today’s homes and businesses. The new facility would be built from the ground up with the future in mind, providing “extensive environmental benefits and affordable, in-state processing for Vermonters’ recycling for decades to come,” they said.

The new machinery and facilities are expected to double current factory output, while meeting environmental standards, with the CSWD estimating an overall effect equivalent to removing around 52,000 vehicles from the road.

The existing facility was built to handle 25,000 tons of recyclables every year, but handles 47,000 today. The replacement would be designed to handle up to 70,000 tons per year, according to the district’s FAQ document about the bond vote.

The bond proposal would fund a majority of the project’s estimated costs, with the CSWD fronting an additional $4 million of its own funds, according to the text of the measure as it will appear on ballots.

While officials have yet to draft a debt structure, they will likely be 25-year notes according to officials.

In the FAQ, they say the bond will be repaid from revenues generated by the Materials Recovery Facility from the sale of recyclables on the commodities markets and from the per-ton tip fee collected for garbage and recycling drop-offs.

The right to assess cities and towns in the district will be a backstop that the district does not want to use.

“CSWD has not assessed cities/towns since 1992 and we have no intention of doing so now,” the document said. “CSWD has several other ways to raise the funds to repay the bond before we would need to assess our member towns.”

The solid waste district has no outstanding bond debt after its most recent issue matured in 2012, according to posting on the Municipal Securities Rulemaking Board’s EMMA disclosure website.

UK business and unions demand scrapping of planned bonfire of EU rules
Stocks making the biggest moves premarket: Activision Blizzard, Tesla, Manchester United and others
Mortgage Demand Down Up To 88% From This Time Last Year
21 Unique Holiday Gifts For The Home To Give To Everyone On Your List
Argentina’s fan token sinks 31% after World Cup loss against Saudi Arabia