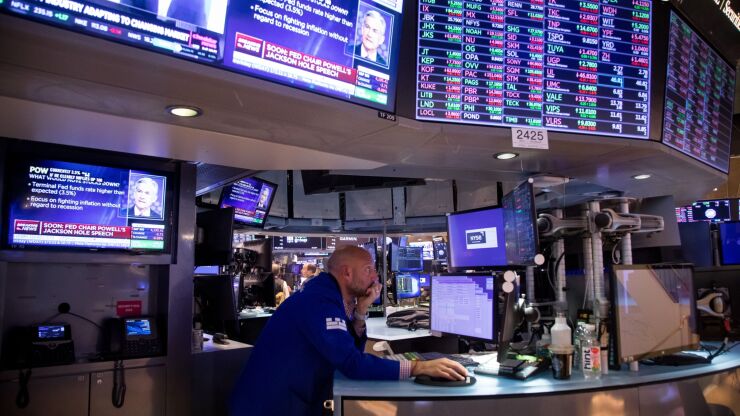 Securities firms in New York City saw their pretax first half profits fall 56.3% to $13.5 billion from $31 billion in the same period of 2021, according to a report released by the state on Tuesday.

During the pandemic, securities companies reported record high profits, with the combined earnings in 2020 and 2021 of $109.3 billion being almost as high as the $111.5 billion reported in the previous five years combined, the report said.

The past two years of record profits and bonuses were fueled in part by massive federal aid to states and cities in response to the COVID-19 pandemic and were not sustainable, according to state comptroller Thomas DiNapoli’s annual report, The Securities Industry in New York City.

“The securities sector was a buffer for state and city revenues during the pandemic,” DiNapoli said. “As the sector slows down in 2022, leading firms are reviewing staffing and office space needs and a prolonged downturn could negatively impact state and city coffers.”

Wall Street firms also said 56% of their employees worked in the office on any given day in September, compared to 49% for all firms, according to a survey done by the Partnership for New York City, a nonprofit whose 330 members are business leaders whose companies employ more than 1 million New Yorkers.

The financial services sector, which includes the securities industry, is the largest office space tenant in the city. Activity in the sector impacts property taxes, which at 43% provides the largest share of city tax revenue and are forecast to provide $31.3 billion in revenue in fiscal 2023.

“Although the financial services sector has led the return to the office, many firms are still partly working remotely. If the shift to remote work, in hybrid or whole, becomes permanent and affects real estate choices, there will be additional pressure on the city’s finances,” the report said.

Industry performance is traditionally measured by using the pre-tax profits of New York Stock Exchange member firms’ broker/dealer operations. There are now about 126 member firms, down from over 200 in 2007 before the financial crisis and coronavirus pandemic.

The report said the decline in revenue in the first six months of the year reflected several factors, including a 47.9% drop in income from trading, underwriting and securities activities.

“The decline in profits was not a surprise,” DiNapoli said. “What’s a comfort is that we’re back to pre-pandemic levels. So the notion that it’s crashing and it’s all gloom-and-doom is not a fair observation. I’m pleased that we’re talking about pre-pandemic levels … and we did see this year that employment, compared to other sectors, was at the very least flat during the pandemic years and in fact in recent months we’ve seen that some jobs are being added.”

The securities industry saw 1,600 jobs added this year through September, bringing the total employed to 181,600. During the pandemic in 2020 and 2021, employment in securities fell 1.9% while job losses in the private sector totaled 9.8% in the same period.

The average compensation for securities industry workers in the city was $516,560 last year — this included bonuses, which averaged $257,500. Bonuses this year are expected to fall from record highs, with the latest forecast predicting a 22% drop. DiNapoli’s report on Wall Street bonuses will be released in March 2023.

New York State ranked third in the nation in bond issuance in 2021. State, city, county and related agencies sold over $48.21 billion of debt last year. The state and its entities, such as the New York Metropolitan Transportation Authority and the Dormitory Authority of the State of New York, have about $102.91 billion of municipal bonds outstanding.

The city is a big bond issuer. In the first quarter of fiscal 2022, it had about $38.13 billion of GOs outstanding. That doesn’t include various agency debt, such as the Transitional Finance Authority or the Municipal Water Finance Authority, which have $42 billion and $31 billion outstanding, respectively.

The city’s GOs are rated Aa2 by Moody’s, AA by S&P, AA-minus by Fitch and AA-plus by KBRA.

What is an Ethereum Virtual Machine (EVM) and how does it work?
BTC price holds $16K as analyst says Bitcoin fundamentals ‘unchanged’
See which states have suffered the most major weather disasters since 2011
UK business and unions demand scrapping of planned bonfire of EU rules
How Atlanta’s growing economy burned low-income renters and homebuyers