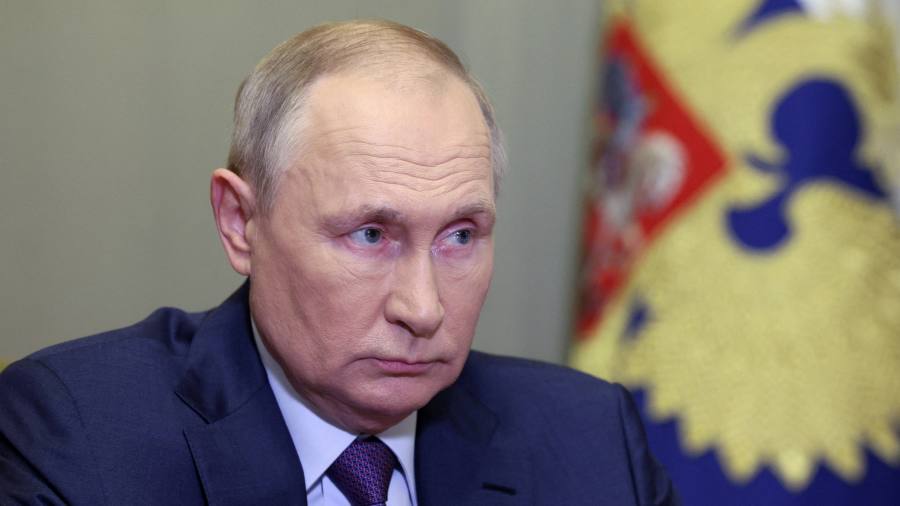 Vladimir Putin has accused Ukraine of carrying out a “terrorist attack” against the bridge linking Crimea to mainland Russia, a critical military supply route for its invasion of Ukraine and symbol of Russian prestige.

Russia’s president said there was “no doubt” that Ukraine was behind the explosion, which sent two of the bridge’s road spans crashing into the sea and set off a fire that left clouds of smoke billowing over the peninsula on Saturday morning.

In a video released by the Kremlin on Sunday, Putin accused “Ukrainian secret services” of carrying out the assault, which he described as a “terrorist attack aimed at destroying critical Russian civilian infrastructure”.

Ukraine has not claimed responsibility for the attack, though officials did post several comments mocking Russia on social media and the Ukrainian post office has issued a commemorative stamp.

Earlier on Sunday, Russian missiles pounded residential areas in the Ukrainian city of Zaporizhzhia, killing 20 and injuring dozens while several apartment blocks were left in ruins.

“The strikes last night continued a series of Russian missile strikes on Zaporizhzhia, which have killed at least 43 people since October 3 this week alone,” Zelenskyy said.

“The constant terror against the civilian population is Russia’s apparent refusal to engage in real negotiations. Terrorism is a crime that must be punished. Terrorism at the state level is one of the most terrible international crimes, which threatens not only one person in the world, but also the entire international community,” Zelenskyy added.

“Putin accuses Ukraine of terrorism? Sounds too cynical even for Russia,” Mykhailo Podolyak, an adviser in Zelenskyy’s administration, wrote on Twitter.

The Russian president will hold a meeting of his security council on Monday, Kremlin spokesperson Dmitry Peskov said, according to Russian state media outlets.

The attack on the 12-mile Crimean bridge, which Russian investigators said killed three people and was caused by a truck filled with explosives, marked an embarrassment to Putin as Ukraine continues to push back Russia’s forces in the south-east.

Moscow has claimed four regions of Ukraine as its own territory after staging local referendums that were widely labelled a sham and then annexing them in a lavish ceremony in the Kremlin.

Ukraine has launched a counteroffensive, recapturing swaths of the region, and appears to have carried out several audacious strikes deep behind enemy lines.

Hardline Russian war supporters have called on Moscow to retaliate by striking civilian infrastructure in Ukraine such as bridges or dams. Putin has also threatened to use “all the means at our disposal” to defend the territory he claims as Russia, raising the threat he could strike Ukraine with tactical nuclear weapons.

Peskov said it was “completely incorrect” to suggest Moscow could respond by using nuclear weapons, according to Ria Novosti.

After the attack on Zaporizhzhia, Ukrainian foreign minister Dmytro Kuleba called for more military assistance from the west. “We urgently need more modern air and missile defence systems to save innocent lives. I urge partners to speed up deliveries,” he wrote on Twitter.

The latest attack comes as Russia struggles to maintain its grip on areas of southern Ukraine it occupied at the war’s outset in February. It was the second blow to Zaporizhzhia in the space of a week, after a missile attack on a residential building on Thursday.

“Our Zaporizhzhia rescuers have had a difficult week,” Serhiy Kruk, chief of the State Emergency Service, wrote on Telegram. His office reported rescue operations were still under way in the afternoon and dogs had been brought in to help search for people trapped under the rubble. City council official Anatoliy Kurtev said on Telegram that “about 20 residential buildings and 50 high-rise buildings were damaged” as well as four schools.

Putin annexed Russian-occupied parts of Zaporizhzhia region in late September, but the city itself has remained outside Moscow’s control. Russia has not been able to clarify how much of Kherson and of the Zaporizhzhia region and city it claims as its territory.

Saturday’s explosion on the Crimean bridge left a section of the structure’s motorway submerged and set a freight train carrying fuel oil passing on the parallel railway bridge on fire.

Late on Saturday, Russian officials scrambled to portray the damage to the Crimean bridge as insignificant, limited to one motorway carriageway rather than taking out the entire transport link.

The bridge is a crucial military supply route for Russian troops in occupied southern Ukraine and the damage to the bridge could seriously constrain Russian forces, helping Ukraine expand its counteroffensive.

Russian defence officials sought to play down the risks, saying Moscow’s forces would be “fully supplied” using other routes by land or by sea.

The head of the city of Sevastopol told residents to keep calm, while Sergei Aksyonov, the Crimean governor, said the peninsula had enough fuel to last a month. Queues had already formed at petrol stations on Saturday.

“The situation is manageable — it’s unpleasant, but not fatal,” Aksyonov said. He said the peninsula also had enough food supplies to last over two months.