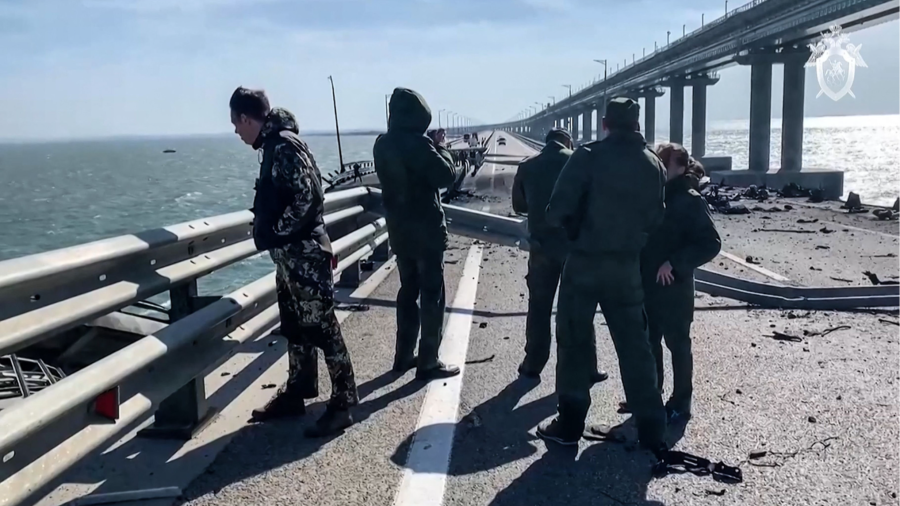 An explosion tore through Russia’s bridge across the Kerch Strait to Crimea early on Saturday, killing at least three people and severely damaging its structure in a major blow to Vladimir Putin more than seven months into his invasion of Ukraine.

Russia’s anti-terrorist committee said a truck exploded on the bridge’s roadside in the early hours of Saturday morning and caused seven fuel tanks on the railway bridge which runs alongside it to ignite.

Putin, Russia’s president, ordered officials to step up security measures at the bridge and investigate the explosion, which sent huge clouds of smoke into the sky as a blaze raged, caused two road spans of the bridge to collapse and scorched part of the railway.

The 12-mile bridge was devised when Russia annexed Crimea from Ukraine in 2014 and completed in 2018. It is an engineering feat — the Wehrmacht and Red Army both tried and failed to cross the waters between the peninsula and the Russian mainland during the second world war — and had become a symbol of Russian prestige.

It is a key artery for shipping as it spans routes connecting export ports on the Azov Sea to the Black Sea. It is also a major conduit to supply Russia’s war effort in south-eastern Ukraine, where its troops have made substantial retreats in the last week from territory Putin claimed as Russian after annexing four Ukrainian regions.

The apparent attack is a fresh humiliation for Russia as its invasion of Ukraine, originally designed to capture Kyiv in a matter of days, continues to struggle.

Ukrainian officials did not claim responsibility but hailed the bridge’s collapse.

“Crimea, the bridge, the beginning,” tweeted Mykhailo Podolyak, a senior adviser to Ukrainian president Volodymyr Zelenskyy, as he posted a picture of the bridge falling into the sea.

“Everything illegal must be destroyed, everything stolen must be returned to Ukraine, everything occupied by Russia must be expelled.”

Ukraine’s post office said it would issue a commemorative stamp superimposing a scene from the film Titanic over an image of the bridge burning.

The SBU, Ukraine’s main security service, tweeted a rewritten stanza from a poem by Taras Shevchenko, Ukraine’s most famous author, that hinted at its involvement. “Dawn, the bridge burns beautifully. A nightingale in Crimea meets the SBU,” the agency wrote.

Russian officials claimed the damage to the bridge was insignificant and reopened it for road and rail traffic on Saturday afternoon. The defence ministry claimed it could supply troops in mainland Ukraine by land and sea, bypassing Crimea.

In Kherson region, which links Crimea to the mainland where Russia has made its biggest retreats in the last week, the Putin-appointed acting governor said officials would temporarily evacuate children, their parents and the elderly to mainland Russia “while the perimeter is cleansed”.

The Russian foreign ministry did not directly blame Kyiv for the explosion but said Ukraine’s gleeful reaction indicated the government’s “terrorist nature”.

Putin has shown no indication he is seeking an end to the war. Hours after the attack, the defence ministry said it had promoted Sergei Surovikin, Russia’s air force chief, as the primary commander of Russia’s invasion efforts.

Though Surovikin notably failed to establish air superiority in the war, he is notorious for his role leading Russia’s intervention in the Syrian conflict, including the aerial assault that destroyed the city of Aleppo.

Lawmakers in Kremlin-controlled opposition parties and prominent state TV talking heads, who have played an influential role in driving Putin to escalate Russia’s efforts in the conflict, called on the Kremlin to retaliate.

“There won’t be any more sanctions! They can’t say anything worse! We need to do our own thing and finish what we started. There’s no way back! It’s time to respond!” tweeted Sergei Mironov, head of the A Just Russia party.

But Putin did not issue any public statements, while other officials assured Russians the bridge would soon be working as normal.

Leonid Slutsky, chair of the foreign affairs committee in Russia’s upper house of parliament, told reporters Moscow’s response should be “harsh” but “not necessarily in the forehead”.

Western diplomats in Kyiv seeking information on the explosion were told by a Ukrainian official that the country’s military had evidence that the fuel tanks on the railway bridge were headed to a military depot.

The official stopped short of taking credit for the attack, one diplomat said, but the claim implies that the Ukrainian government considered the fuel tanks were a military, and thus legitimate, target.

“Nobody knows who has done it and the Ukrainians haven’t claimed it,” EU foreign policy chief Josep Borrell told the FT.

“Any escalation in a war is of concern, so we have to be very careful,” Borrell added. “I’m sure Putin could never imagine this, at the start of the war. But this is new, an inter-state war with a nuclear power.”