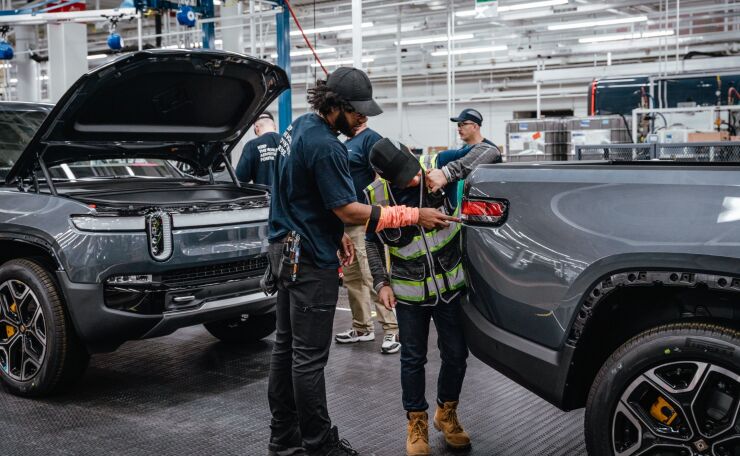 The fate of a planned 16-million-square-foot Georgia factory for electric vehicle manufacturer Rivian is in question after a judge denied validation of $15 billion in PILOT bonds planned to back its construction.

The Georgia Economic Development Commission, along with the Joint Development Authority for Jasper, Morgan, Newton, and Walton counties and Rivian, negotiated an agreement in May that included a bevy of incentives to attract the electric truck manufacturer to a 2000-acre plot less than 50 miles east of downtown Atlanta.

The facility was to include a large plant outfitted to accommodate battery and vehicle production, miles of new roads and utility systems, shipping infrastructure, driving test tracks, and heavy equipment to deal with industrial waste.

The agreement would have made available to Rivian $15 billion of tax revenue bonds issued by the GDEcD via the JDA in a “bond-financed sale-leaseback structure” that would enable the carmaker to rent the facility after purchasing bonds incrementally, acting as a tenant and thereby free from local property taxes, paying instead a lower amount of payments-in-lieu-of-taxes, or PILOTs, tothe counties.

Calling themselves No2Rivian, a group of eight opposing residents led by JoEllen Artz sued to block the validation of the bond offering in July, objecting in their brief to the bond’s leaseback structure, as well as other aspects of the deal, including potential environmental risks and zoning issues.

“The JDA kept saying that this bond should be validated because it’s sound, reasonable, and feasible,” Artz said. “So our attorneys jumped on that to come up with all these explanations for why it was not.”

Ocmulgee Superior Courts Chief Judge Brenda Holbert Trammell agreed, writing in her decision that the JDA “has put the issue of the Project’s economic feasibility squarely before the court and therefore it bears the burden of proving the same, a burden which it has not carried.”

Along with highlighting a lack of research on potential impact of the facility to surrounding communities, the court also questioned the economic benefits of the deal, citing a lack of expert input from economists and financial advisors.

“The JDA did not employ an investment banker, an economist, a financial analyst, or any third party to evaluate the financial wherewithal of Rivian or in making the decision on the soundness of this Project,” the ruling said, adding they failed to “perform any independent analysis concerning the economic viability of the Bonds, the Project, or Rivian itself.”

In its ruling, the court further questioned the accuracy of how many jobs the facility would create and how much those employees would be paid.

The economic development agreements list the creation of 7,500 jobs at an average salary of $56,000.

However, “according to this provision of the EDA the projected jobs could include other employees of the company or contract workers, but the only guaranteed average salary is $36,400.00 per year, not the $56,000.00 referenced,” the opinion said.

The company’s share price opened at $34.17 Tuesday on the NASDAQ, after hitting $172.01 within a week of its November initial public offering.

The company posted $3.3 billion in losses this year according to its recent quarterly financial report.

According to the court’s decision, the Georgia factory is supposed to be able to produce 400,000 vehicles annually as well, but the company sold only 10,161 vehicles in the first six months of 2022.

With $16.5 billion of cash on handbut a burn rate of $6.4 million, Trammel also questioned Rivian’s ability to “support the financial viability of the Project.”

“Rivian’s cash reserves are quickly drying up, thus casting serious doubt on whether it will be able to commence, let alone complete, the Project,” her decision said.

Rivian’s opponents are taking little time relishing in the victory. According to Artz, No2Rivian is continue to work on countering an expected appeal from the JDA.

“We’re not just waiting,” she said. “We’re preparing another suit to stop the construction or to stop the land disturbance.”

The state’s economic development authority and the Joint Development Authority of Jasper, Morgan, Newton and Walton Counties issued a statement that they are currently assessing all legal options, according to multiple published reports.

American Dream mall misses another debt payment
Marathon’s first Bitcoin sale in 2 years not the result of distress
Yields rise with muni one-year topping 2.50%
Avalanche (AVAX) price is up, but do fundamentals support the rally?
Fantom’s 5-week winning streak is in danger — Will FTM price lose 35%?