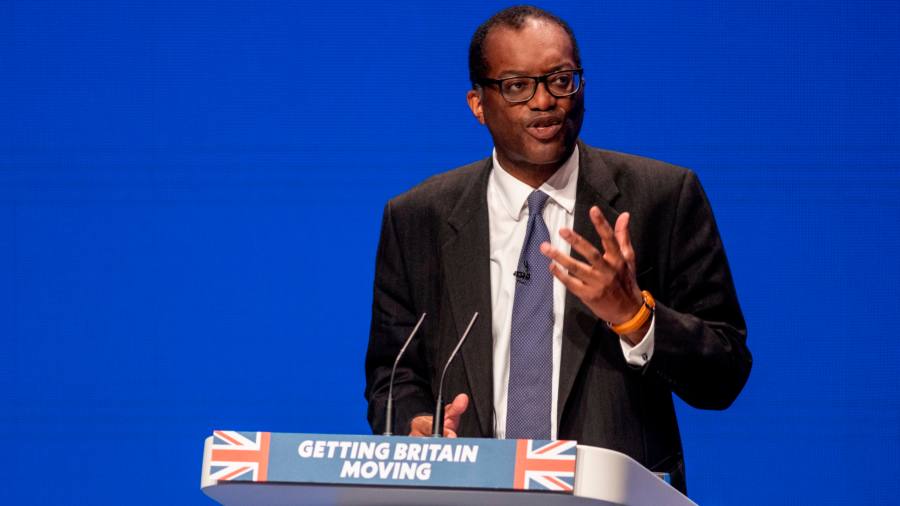 Chancellor Kwasi Kwarteng is to accelerate the publication of his plan to cut Britain’s debt in an attempt to reassure markets after he was forced to make a humbling U-turn on a key part of his “mini-Budget”.

Kwarteng is expected to publish his medium-term fiscal plan, accompanied by official forecasts, later this month after previously insisting he would wait more than 50 days until November 23.

His attempt to reassure markets, confirmed by several government officials, came in the aftermath of a humiliating retreat on his plan to axe the 45p top rate of income tax in the face of a Tory revolt.

Kwarteng admitted in a speech to the Conservative party conference in Birmingham on Monday: “It has been tough, but we need to focus on the job in hand. We need to move forward. No more distractions.”

He said his September 23 fiscal statement had caused “a little turbulence”: it sparked a run on the pound, sent borrowing costs spiralling and forced the Bank of England to make a £65bn intervention in the bond market.

Kwarteng and Liz Truss, the prime minister, agreed to abandon the plan to axe the top rate of tax late on Sunday night, after warnings from Tory MPs that they would not vote for it in the House of Commons.

Former cabinet ministers Michael Gove and Grant Shapps had positioned themselves at the head of the revolt over the policy, which would have benefited those earning more than £150,000.

The decision badly damaged the authority of the chancellor and prime minister, but Truss told colleagues she “never” considered sacking Kwarteng. She was closely involved in drawing up the fiscal package.

Kwarteng’s medium-term fiscal plan, now expected this month, will set out a five-year plan to put debt on a downward path, including a tight squeeze on public spending. Truss refuses to call the policy “austerity”.

The Office for Budget Responsibility will bring forward forecasts alongside the plan, assessing whether Truss and Kwarteng’s tax-cutting and supply-side reforms can actually deliver a significant boost to growth.

One cabinet minister suggested the OBR may publish a range of growth scenarios with their impact on the public finances, including the government’s target of 2.5 per cent annual growth.

The OBR typically publishes a central growth forecast in its fiscal projection, along with scenarios or high and low growth.

Investors bought sterling and UK government bonds following the policy reversal on Monday morning; by the afternoon the pound had returned to its level before the government announced its tax-cutting plan last month.

By late afternoon trading, the pound had risen 1 per cent against the dollar to $1.127. This compared with sterling’s record low of $1.038 against the US currency a week ago after Kwarteng announced his debt-funded £45bn package of tax cuts.

Although scrapping the top rate of tax would have cost only between £2bn and £3bn a year, it was seen by some Tory MPs as totemic of a government that appeared to be losing touch with voters.

One cabinet minister close to Truss said: “It’s a very painful decision but we had no choice ultimately. There was no way we were going to get the Budget through.”

Having retreated on the 45p tax rate plan, Kwarteng and Truss could now come under pressure to reverse other proposed unfunded tax cuts that have blown a hole in the public finances.

They include a £17bn plan to reverse a corporation tax rise — a policy business leaders have said is not a priority — although Kwarteng’s allies are confident MPs will vote for that policy as well as a £13bn cut to national insurance.

Some Tory MPs, including Gove, have also criticised Kwarteng’s decision to axe the cap on bankers’ bonuses.

Shadow chancellor Rachel Reeves said the Tories had “destroyed their economic credibility” and damaged trust in the British economy.

“The prime minister has been forced to abandon her unfunded tax cut for the richest 1 per cent — but it comes too late for the families who will pay higher mortgages and higher prices for years to come,” she said.