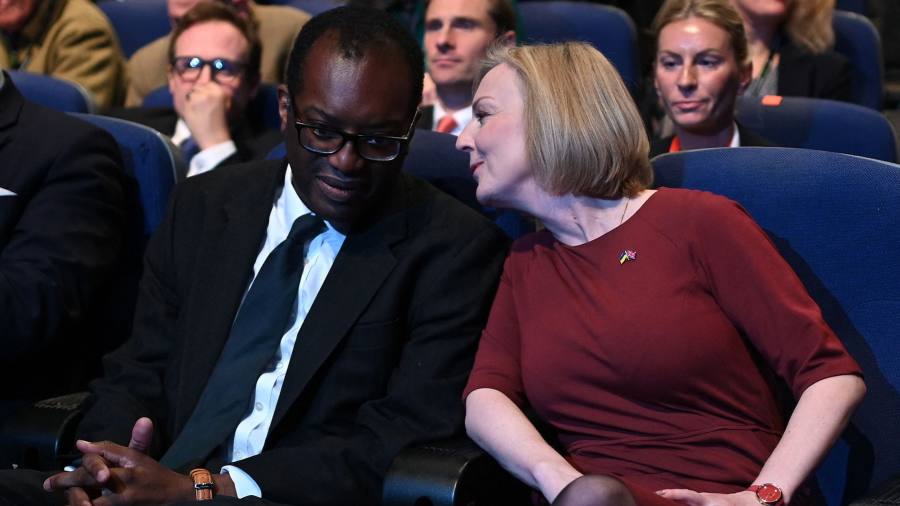 Kwasi Kwarteng is facing a mounting Tory rebellion over his plan to scrap the 45p top rate of income tax, but will on Monday tell Conservative party members he is “confident” that the plan is “the right one”.

The chancellor’s tax-cutting “mini” Budget, which also included a wave of new government borrowing, created turmoil in the markets last week and left him scrambling to prove that he will get a grip on debt.

Liz Truss, prime minister, has been warned that she faces defeat in the House of Commons if she persists with the abolition of the 45p rate, the most controversial element of a debt-funded £45bn package of tax cuts.

Michael Gove, former cabinet minister, on Sunday put himself at the forefront of the Tory mutiny over the tax cut for the richest 1 per cent of Britons, saying it was wrong at a time when “people are suffering”.

Another Tory MP representing a working-class seat described as “deranged” the idea of cutting taxes for the rich while planning cuts to benefits and public services.

One minister said a retreat over the scrapping of the 45p tax band was inevitable. “We can’t get it through, so we might as well stop now. Everyone has to U-turn sometimes.”

Truss insisted on Sunday that she would stick to the plan, but admitted that the 45p tax rate change had not been discussed in cabinet: “It was a decision the chancellor made,” she told the BBC’s Sunday with Laura Kuenssberg.

Tory officials denied that she was trying to blame Kwarteng. Chris Philp, Treasury chief secretary, has denied to colleagues reports that he was a prime mover behind the policy.

The tensions cast a cloud over the Conservatives’ party conference, which began in Birmingham on Sunday. Kwarteng will on Monday tell attendees: “We must stay the course. I am confident our plan is the right one.”

He will also promise “an ironclad commitment to fiscal discipline”.

“The path ahead of us was one of slow, managed decline. And I refuse to accept that it is somehow Britain’s destiny to fall into middle-income status or that the tax burden reaching a 70-year high is somehow inevitable,” the chancellor will say.

But Gove told the BBC that “using borrowed money to fund tax cuts is not Conservative” and that cutting taxes on earnings above £150,000 and removing a cap on bankers’ bonuses projected “the wrong values”.

He later said: “It’s going to be very, very, very difficult to argue that it is right to reduce welfare when we’re also reducing taxes for the wealthiest.”

Gove also suggested that Truss did not have a mandate to cut taxes for the wealthy, saying she had not mentioned the idea in the Tory leadership contest.

Gove is the highest profile critic of Truss’s new economic plan to air his views publicly, but he is far from alone. A number of Tory MPs told the Financial Times that they could not support the plan and that it would be defeated in the House of Commons unless the prime minister changed tack.

Truss admitted that mistakes were made in the controversial “mini” Budget that sparked market turmoil last week but said she would not retreat on her plan to deliver £45bn of unfunded tax cuts, insisting it would help deliver growth.

“We should have laid the ground better and I have learned from that,” she said.

The PM repeatedly refused to say whether she would cut public spending to make the sums add up and said she needed to work to win “the hearts and minds” of Tory MPs to convince them her plan was right.

Some Conservative MPs have already started speculating on the possibility that Truss could be replaced by her leadership rival Rishi Sunak, who is spending conference week in his North Yorkshire constituency.

The plan triggered fears of higher inflation, causing the pound to fall to a record low against the dollar and a sell-off in UK government bonds. Lenders pulled thousands of mortgage products and the Bank of England launched a £65bn bond-buying scheme to stabilise markets.

Opinion polls in the aftermath of the market rout suggested that the Tories were trailing the Labour opposition by margins of up to 33 points.

BTC price holds $16K as analyst says Bitcoin fundamentals ‘unchanged’
Argentina’s fan token sinks 31% after World Cup loss against Saudi Arabia
The future of parking is in New York — and it costs at least $300,000 per space
See which states have suffered the most major weather disasters since 2011
Mortgage Demand Down Up To 88% From This Time Last Year