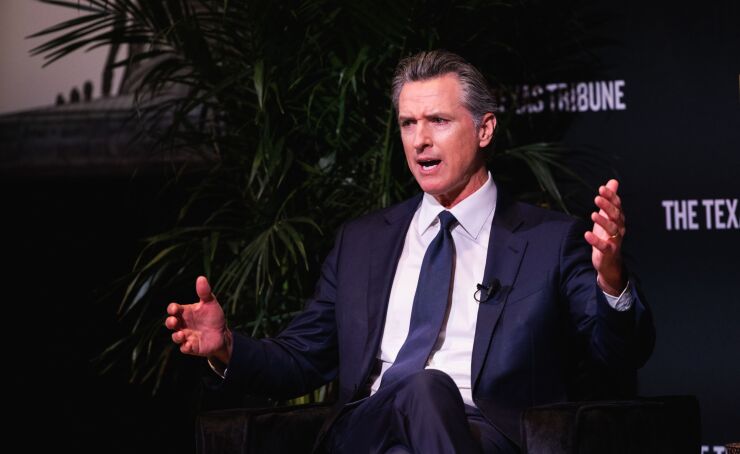 California Gov. Gavin Newsom, who has been bouncing around the country making appearances fueling further talk of a presidential run, has signed hundreds of bills ahead of Thursday’s deadline to sign or veto bills the Legislature sent him.

The final bill signings also serve as a demarcation of sorts for when the governor moves from tying up loose ends from the 2022 legislative session to concentrating on the fiscal 2024 budget that he will introduce in January. Newsom, up for re-election in November, is the solid frontrunner.

He once again discounted presidential aspirations during hops around the country, which included delivering closing remarks at Climate Week NYC Wednesday. He also spoke at the United Nations Climate Action: Race to Zero and Resilience Forum, last week, which is dedicated to achieving net zero carbon emissions.

The California Air Resources Board voted to adopt the policy in August.

It will phase out the sale of new gasoline-powered cars, trucks and SUVs. Newsom claims it will dramatically cut the state’s climate-warming emissions by accelerating the transition to electric vehicles.

“California now has a groundbreaking, world-leading plan to achieve 100% zero-emission vehicle sales by 2035,” Newsom said in August when CARB approved the ban. “It’s ambitious, it’s innovative, it’s the action we must take if we’re serious about leaving the planet better off for future generations.”

To date, 17 states have adopted all or part of California’s low-emission and zero-emission vehicle regulations, as allowed under Section 177 of the Clean Air Act. This additional support for the clean vehicle market means that more than 35% of national new light-duty vehicle sales meet California automotive emissions standards, according to CARB.

California’s minority Republicans lobbed volleys at Newsom during arecent heatwave criticizing the move to electric vehicles seen as likely to place further stress on the grid. Though environmentalists noted that the cars include home-based solar-powered charging stations, limiting the effect on the grid.

Among the bills signed by Newsom is Assembly Bill 2046, introduced by Assemblymembers Jose Medina, D-Riverside and Adam Gray, D-Merced, which would create the Inland Rising Fund to support the multiyear operating costs for the development, operation and maintenance of economic development and innovative climate change research efforts and health care and medical research operations at the University of California, Riverside and UC Merced. The bill appropriates $1.46 billion from the general fund.

The bill aims to level the playing field for residents who live in the Inland Empire and Central Valley, who are “among the lowest in educational attainment levels and per-capital income.” Those two campuses are seen as being “uniquely positioned” to contribute to the economic vitality of California’s inland regions through economic development, research innovation and continuing enrollment growth of undergraduate, professional and graduate students, according to an analysis of the legislation by Medina, who chairs the Assembly Committee on Higher Education.

The funding would be used to accelerate economic development and innovation in the areas of air pollution, clean technology and sustainable agriculture.

“The students at UC Merced and Riverside deserve a world class education, but our local universities simply do not receive as much funding as their coastal counterparts,” Gray said at June press conference after the Assembly approved the bill. “I am proud to stand shoulder to shoulder with Assemblymember Medina to right this wrong and invest in the education of California’s growing regions.”