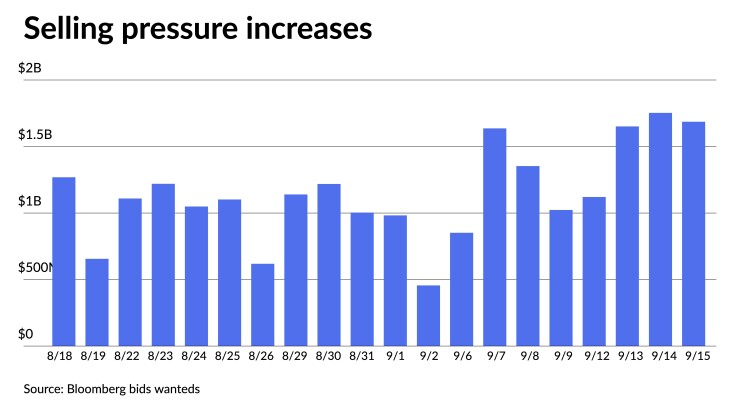 Municipals were weaker on the front end of the curve as selling pressure mounted all week while U.S. Treasuries were mixed and equities ended down again.

Investors will be greeted with a lackluster calendar of a mere $1.4 billion total and only two deals over $100 million as issuers hold back with the Federal Open Market Committee meeting and uncertainty over the next rate hike hanging over.

Triple-A municipal yields rose another three to five basis points on the short end Friday while UST were better there but saw losses out long.

Secondary selling pressure has grown this past week, with more outflows from mutual funds and growing secondary bid lists.

On the heels of August’s hotter-than-expected consumer price index print, “investors have quickly adjusted their expectations for the pace of Fed rate hikes,” according to Barclays PLC.

Going into next week, some thought a 50 basis point rate hike was expected but that has grown higher after the new inflation data.

Barclays strategists Mikhail Foux, Clare Pickering and Mayur Patel said not only has a 75 basis point rate increase been fully priced in, but investors are even assigning a more than 20% probability of a 100 basis point hike.

But unless the Fed hikes 100 basis points next week in a small probability event, BoA strategists Yingchen Li and Ian Rogow said “the market likely needs more time, possibly even after next week’s [Federal Open Market Committee] meeting, to digest the shock from the August CPI report.”

They noted that the renewed curve flattening for munis and USTs in recent days, “although a welcome sign, is too slow to change the Fed’s ever-extending goalpost that is subject to the trajectory of inflation.”

Following September’s rate hike, Barclays strategists “expect an additional four or five 25 basis point rate increases after that, and [they] now see the Fed starting to ease much later than before, in July 2023 or even later,” they said.

BofA strategists, though, believe there will be 50 basis points in December and 25 basis points in March 2023, and “a delayed hard landing, pushing out the mild recession from the end of this year into the first half of next year.”

“With the additional hike now forecasted for March, December’s hike moves from the likely last hike to the second-to-last likely hike; as a result, the period from December 2022 to March should provide a strong period for forward muni returns, if history repeats itself,” they said.

Treasury rates keep moving higher, with yields increasing 10 to 20 basis points in the front and the belly of the curve this week, and the UST curve has inverted further, Barclays noted.

“Tax-exempts have slightly outperformed, mostly in the long end, with MMD-UST ratios declining 2-3pp this week,” they noted.

In general, Barclays strategists said “munis did relatively well in the face of robust issuance (about $9 billion this week), and the forward pipeline remains relatively subdued, especially for taxables, and next week we expect just $3 billion.”

They believe the issuance lull “will likely be temporary as October is always a heavy supply month, and this year issuers might be incentivized to come to the market sooner rather than later due to higher rates and an uncertain economic outlook.”

Higher rates and continued outflows have put “pressure on longer-dated bonds, and the yield curve has continued to steepen and now both the 10s20s and 10s30s muni index curves are at their multi-year highs,” according to Barclays.

With long-dated ratios topping 100%, “tax-exempts have started to generate some investor interest, while the belly and the front end do not seem to be as attractive at current ratios,” they said.

Moreover, Barclays strategists said, “the long end is also cheap versus corporates, which does not happen as often, and might actually attract some crossover interest, especially if tax-exempts cheapen even more.”

Muni market conditions, BofA strategists noted, continue to be subject to the swings in USTs, though they aren’t as concerned as in April and May as “investors seem to be in no rush to sell despite the double topped muni AAA rates.”

Mutual fund outflows have been smaller and issuance has been lighter than in April and May, they said.

Additionally, “redemption money should be more than enough to cover new issuance if it is put to work,” BofA strategists said.

But even if the long end of the curve starts to rally in the fourth quarter of the year, they believe think it is too late for issuance to meet their high target of $500 billion, which was based on the possibility of a sustainable second half of the year rally and large flattening that may have reignited refundings. They now expect $420 billion for 2022.

“With volatility persisting in 3Q and QTD issuance disappointingly low, we think it is appropriate to revise our issuance target for the year,” Li and Rogow said.

While new-money issuance this year has been robust — increasing 6% year-over-year, higher than their predictions — they said that’s not enough.

“A nearly 50% decline in refunding volumes has dragged down total issuance all year,” BofA strategists said.

Generally, “the 30-day visible supply index would trace out a rising trend by this time in a typical year; this year is very different,” they said. “The index has trended down since early May. In the typically large month of June, there is only $36 billion of issuance this year.”

And with the “second-to-last hike has likely been pushed to December,” BofA strategists noted that “the long end rates action likely will not bring a deluge of bond issuance” in the fourth quarter of the year.

Therefore, by the end of the third quarter, issuance will be at $303 billion, averaging $101 billion per quarter and $33.7 billion per month.

Issuance in the fourth quarter, BofA strategists said, should be larger, as it is usually the largest quarter, but, “given the continued uncertainty of rates and credit spreads,” they believe $117 billion would be “more reasonable.” This would bring total issuance for 2022 to around $420 billion.

But, issuance could come in even lower if an unexpected liquidity crisis in the macro market occurs, they said.

Conversely, “if the long-end munis and Treasuries start a strong rally in an otherwise normal market condition,” BofA strategists expect issuance to be somewhat higher than $117 billion.

Calendar decreases
Investors will be greeted Monday with a new-issue calendar estimated at a mere $1.431 billion with only two deals over $100 million scheduled.

There are $890.4 million of negotiated deals on tap and $540.4 million on the competitive calendar.

The negotiated calendar is led by the $549 million of green GOs from the San Diego Unified School District, California.

The Board of Water Works of the Louisville/Jefferson County Metro Government, Kentucky, leads the competitive calendar with $129 million of water system revenue and refunding revenue bonds.

Competitive:
The Board of Water Works of the Louisville/Jefferson County Metro Government, Kentucky, is set to sell $128.660 million of water system revenue and refunding revenue bonds, Series 2022, at 10 a.m. eastern Thursday.

Stocks making the biggest moves midday: FedEx, Boeing, Ally, Domino’s and more
Kaufman Hall bulks up with acquisition of Claro Healthcare
The impact of the Wintermute hack could have been worse than 3AC, Voyager and Celsius — Here is why
Kwarteng to unveil his plan to kick-start UK economic growth
Stocks making the biggest moves in the premarket: Ford, Change Healthcare, Cognex and more