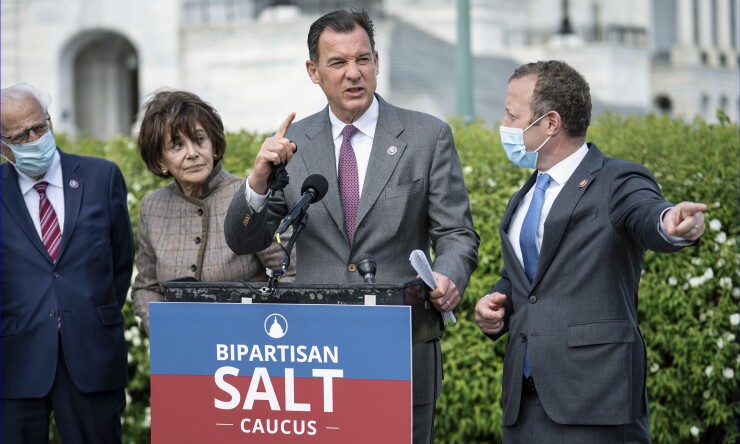 A handful of House Democrats who advocated for an increase in the state and local tax deduction cap appear ready to support the latest budget reconciliation bill that omits such provisions, dealing a blow to issuers who were proponents of SALT reform.

The representatives may be the deciding votes for the package to pass through the House since Democrats can afford only four defectors against a Republican caucus united in opposition to the bill.

But a vote for the latest compromise between Sen. Joe Manchin, D- W.Va. and Senate Majority Leader Chuck Schumer would seem to contradict the group’s earlier refusal to back any bill that excluded an increase or removal of the cap.

New York Rep. Tom Suozzi, who was among the most adamant supporters of SALT reform, said he had “no objections” to the bill’s current state.

“‘No SALT, no deal’ has always been about if they try to change the tax on the personal income tax code and so they’re not doing that,” Suozzi said to CQ.

New Jersey Rep. Tom Malinowski, who never committed to voting against a bill without SALT reform but pushed for changes to the tax cap, said he’s now willing to compromise.

“I mean, who can be against lowering prescription drug prices for seniors while making Amazon pay taxes?” Malinowski said to CQ, alluding to a 15% domestic minimum tax on the largest corporations included in the package. “I want SALT for my constituents, but my constituents also want these other things.”

Democratic supporters of SALT reform — primarily from New York, New Jersey, California and other states with high taxes — rallied around the phrase “No SALT, no deal” for months, arguing the Trump-era tax policy that placed a $10,000 cap on individual taxpayers deducting state and local taxes from their federal tax hurt middle-class communities and hindered state and local issuers from levying taxes and collecting additional revenues.

The compromise on the almost $740 billion reconciliation bill would preserve several of the party’s top priorities, but leave out several policies pushed for by House Democrats, including SALT reform and new health care and immigration provisions.

The absence of SALT revisions follows a trend of reconciliation proposals unfavorable to the muni market, ranging from the failure to reinstate tax-exempt advance refunding to the inclusion of a 15% alternative corporate minimum tax that some believe will worsen tax-exempt muni demand.

“…If the 15% minimum tax is indeed passed without any carve outs for tax-exempts, we would view this as a negative for municipal demand from banks and P&C insurers,” Barclays PLC said in an analysis. “Separately, various municipal groups will likely try to attach the resurrection of tax-exempt advance refundings to the bill, but this will not be easy, due to the small size of the package.”

Manchin seemed unmoved by criticisms of the absence of SALT reform, reaffirming his opposition to “loopholes” like SALT that “favor red state or blue state elites” in a statement last week.

But some expect the muni industry to make a sustained push for the inclusion of public finance-friendly provisions in the compromise package.

“…We expect a concerted lobbying effort to include other muni bond provisions which were left out, like reinstating tax-exempt advance refundings,” BofA said in an analysis. “Those provisions have been included in earlier packages, only to be stripped out.”

House Speaker Nancy Pelosi said she intends to collect the House back together in the second week of August to vote on the new bill.