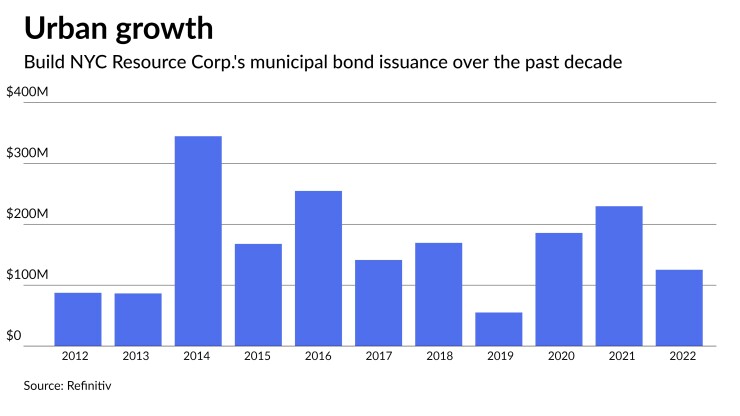 New York City’s issuance of $22 million of special obligation revenue-backed bonds next week is just the latest in a series of deals that local officials hope will help address the future educational needs of a growing and increasingly youthful urban population.

The bonds are slated to be priced by Robert W. Baird & Co. on Thursday through conduit issuer Build NYC Resource Corp. for the Global Community Charter School project.

Global Community Charter School (GCCS), is a Harlem-based charter school that’s served one of the city’s most diverse and lowest-earning zip codes since opening its doors in 2012.

GCCS currently has 500 students enrolled in kindergarten through 8th grade classes and a growing waiting list of applicants, according to the deal’s investor roadshow.

According to the school’s website, the student body is 28% African-American, 67% Latino and 5% of mixed ethnicity.

Students come from Harlem and the neighborhoods of Washington Heights and the Bronx; 88% of the student body is eligible for federal free and reduced price lunches, 19% are English language learners and 21% are students with disabilities.

The school is seeking new funding to accommodate its expected future growth and to help with the purchase and renovation of the 23,000 square-foot property it currently operates from in upper Manhattan on Fifth Avenue and 142nd Street.

According to the POS, Build NYC will transfer proceeds to GCCS for the purchase of the property when the sale of the bonds is finalized.

Following that, the school will see its monthly rent costs replaced with bi-annual payments to a sinking fund account meant to service the new debt in the years and decades ahead.

New York City has also raised funds for dozens of other charter schools with revenue-backed credit deals since establishing Build NYC in 2012.

The trustee is the Bank of New York Mellon. Hawkins Delafield & Wood, LLP. is bond counsel and Quarles & Brady LLP is the underwriter’s counsel.

The deal is rated BB-plus by S&P Global Ratings.

Each of the charter school deals is evaluated, and in the end rated based in large part on the fiscal picture for each school, said Shivani Singh, S&P’s primary rating analyst for the Build NYC deal.

According to Singh, most charter schools are heavily reliant on state and local funding for about “80 to 90%” of their total operating costs.

In New York, that support includes per-pupil payouts and rental assistance for charter schools that amounts to around 70% of GCCS’s annual budget.

While it might help keep doors open, the official funding also exposes the school to “political noise” and the potential for a reduction in support in leaner economic times.

“It’s sort of an ongoing assessment from an authorizer standpoint,” Singh said. “There’s always that risk that the charter could be revoked, or canceled because they don’t meet certain requirements, whether it’s academic, financial and or something else.”

The risk, however, is minimal for now, she said. GCCS not only has high student performance indicators and a long wait list of potential students but is also filling a critical gap in the city’s educational infrastructure.

“Demand in general for good schools in New York” outstrips supply, Singh said, and the city’s 217 charter schools are popular not just among parents who are offered an alternative to the overcrowded public school system but among state officials who see an “offset of educational expenses” via charter school initiatives.

And with the population expected to grow, the city is more likely to double down, not reduce, support for charter schools into the future.

“Enrollment is growing and if you’re per-pupil funding is growing, that’s good for your revenues overall,” she said. “On the expense side, most schools have been able to sort of navigate expenses.”

Another element securing the new credit is GCCS’s recent efforts to diversify funding and raise more capital from private donors.

“If you have that nice mix where it’s not one revenue stream dominating everything else, then in general from an investor standpoint, that would be less of a risk. It’s more favorable for you operationally,” she said.

According to data compiled by the non-profit New York City Charter School Center, enrollment in the city’s charter schools has steadily increased over the last decade — growing even throughout the COVID-19 pandemic — while public enrollment has declined.

That trend is seen nationwide, according to a report from the educational advocacy non-profit, Center for Educational Reform (CER), and after a decade that saw a 25% growth in the number of charter schools operating, the U.S. now has 7,700 charter schools serving a student body of about 3 million, with “demand higher everywhere they are located. “

Many of those students hail from socioeconomic or ethnic groups “that have traditionally not had access to high-quality public schools.”

On average, charter school students tend to score more highly on standardized exams and perform better in classes because of the adaptability to meet new demographic needs, according to a report by CER.

“Charter schools give families an opportunity to pick the school most suitable for their child’s educational well-being. Teachers choose to create and work at schools where they can directly shape the learning environment for their students and themselves in innovative ways,” according to the report.

Chicago budget forecast brightens
Stocks making the biggest moves after hours: Novavax, Upstart, Allbirds and more
[Inner Game] Anger vs Sadness for Trading Which Emotion is Better Ep 251
As climate change threatens more homes, some properties are getting too costly to insure
A ‘shakeout’ among mortgage lenders is coming, according to CEO of bank that left the business