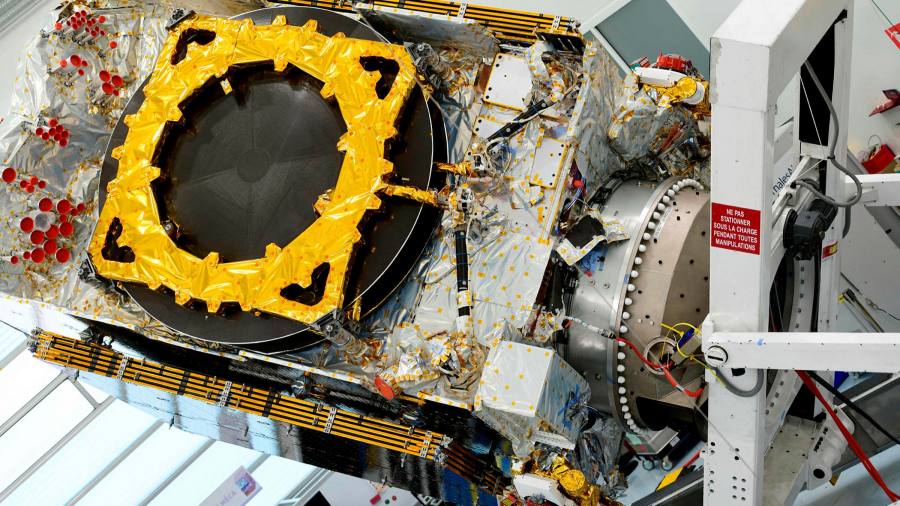 Satellite operator Eutelsat has confirmed it is in discussions to acquire smaller participant OneWeb over an all-share deal that seeks to help the France and UK-based groups better compete with US rivals.

Eutelsat’s share price fell by more than 17 per cent to €8.60 in early trading after the statement on Monday as investors balked at the prospect of a deal.

Under the terms being discussed, the OneWeb and Eutelsat tie-up is being branded as a merger of equals with each set of shareholders ending up with 50 per cent of the combined company. OneWeb shareholders would tender their shares to Eutelsat in exchange for Eutelsat shares.

If completed, the combination would address Eutelsat’s need for growth to offset a declining satellite video business and OneWeb’s requirement for $2bn-$3bn in investment to complete its network and update its technology, according to people close to the deal.

“The transaction would represent a logical next step in the successful partnership between Eutelsat and OneWeb,” said Eutelsat, which bought a 23 per cent stake in OneWeb in 2021.

The French state owns a 19.9 per cent stake in Eutelsat, while the UK owns less than 18 per cent of OneWeb after bringing the company out of bankruptcy in 2020. Both are expected to keep significant shareholdings.

Before the sharp fall in Eutelsat’s shares, officials told the Financial Times at the weekend that the deal valued the UK government’s OneWeb stake at $600mn, a paper profit of $100mn.

But since the transaction is an all-share merger of equals, the drop in Eutelsat’s shares means almost all of those paper profits have been wiped out.

A merger would relieve the UK government of any responsibility for the sizeable investment still required to complete OneWeb’s business plan.

The deal would also be a sign of how European satellite participants, backed by governments who see space communications as a strategic industry, are trying to keep up with billionaire entrepreneurs such as Elon Musk. His company SpaceX has funded disruptive satellite projects using different technology known as lower-earth orbit (LEO) satellites rather than the geostationary orbit ones that Eutelsat has long used. LEO satellites can deliver faster connections.

OneWeb was a pioneer with its own LEO constellation, but now needs massive investment to keep up with SpaceX’s newer technology.

The deal is subject to a shareholder vote at Eutelsat and regulatory approvals.

Analysts said the Eutelsat share price drop could reflect disappointment that the group would be devoting cash to the deal and less to shareholder returns.

Deutsche Bank analyst Roshan Ranjit wrote in a note that “industry consolidation remains a key thematic” in the satellite sector “given volumes of new capacity being launched (SpaceX’s Starlink, Amazon’s Project Kuiper and Telesat’s Lightspeed), and the decline of legacy broadcast”.

Bitcoin price reaches $23.4K on 4.6% gains amid ‘very mixed’ outlook
Bank of England governor defends mandate and vows to tame inflation
Top 5 cryptocurrencies to watch this week: BTC, FLOW, THETA, QNT, MKR
Hawaii Home Rented By Justin Bieber At $10,000 A Night Is Going Up For Auction
Is the economy in a recession? ‘What you call it is less relevant,’ says one economist: Here’s ‘what really matters’