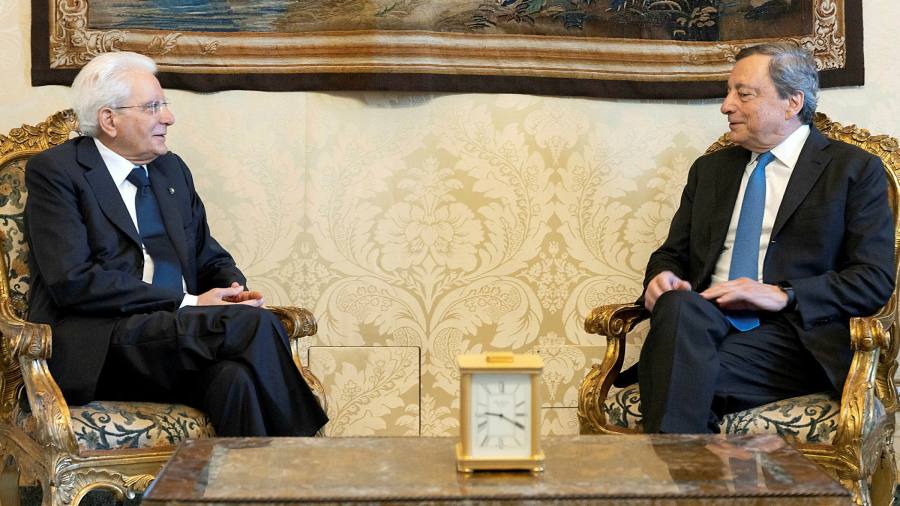 In a statement, President Sergio Mattarella’s office on Thursday said that Draghi would remain in charge of current affairs. Mattarella is now expected to dissolve parliament and announce snap elections.

“After yesterday’s debate I have drawn my conclusions,” Draghi said during a brief appearance at the lower house of parliament before his meeting with the president.

The yield on Italy’s 10-year government bond jumped 0.14 percentage points to 3.52 per cent, as its price dropped sharply on Thursday. That move took the gap between Italian and German benchmark 10-year yields — a closely watched gauge of market stress — to 2.26 percentage points, reflecting a widening of 0.22 percentage points in just two days.

In the parliamentary debate on Wednesday, Draghi accused some members of his cross-party coalition of attempting to subvert his reform agenda and demanded that they recommit to it.

But two centre-right parties — Matteo Salvini’s League and Silvio Berlusconi’s Forza Italia — together with the populist Five Star Movement led by Giuseppe Conte boycotted the vote of confidence in his leadership.

“We played with the future of Italians,” Di Maio wrote on Twitter after Wednesday’s developments. “The effects of this tragic choice will remain in history.”

Italy’s inflation rate hit 8 per cent in June, its highest level since 1986, according to the statistical agency. Faltering on a tight schedule of promised reforms would also jeopardise Rome’s ability to receive the next tranches of its €200bn in funds from the EU’s Covid recovery programme.

Draghi had agreed an ambitious schedule of reforms with the EU with a plan to enhance competition and cut red tape to make Italy more attractive to investment, and to guarantee the sustainability of its heavy public debt, now at about 150 per cent of gross domestic product.

Many of these reforms were expected to be completed by elections scheduled for next spring. But the process is likely to be put on hold, as parties gear up to campaign for early elections.

A FTSE gauge of Italian stocks slid more than 2 per cent in morning dealings, taking its losses over the past two days to almost 4 per cent. The country’s largest banks, which are major holders of Italian debt, led the declines, with Intesa Sanpaolo and UniCredit each down about 5 per cent.

The tumult in Italy’s bond markets comes as the European Central Bank is expected to raise interest rates in the eurozone on Thursday for the first time since 2011, and announce new policies to limit the divergence between the borrowing costs of the bloc’s strongest and weakest economies, including Italy.

Draghi’s exit will also be a setback to the western alliance against Russia’s invasion of Ukraine. The Italian leader has taken an uncompromising stand towards Moscow and was a key architect of the tough sanctions against Russian president Vladimir Putin.

Berlusconi, a former prime minister, had close personal ties with Putin, with whom he once went on holiday, while Salvini has been an admirer of the Russian leader.