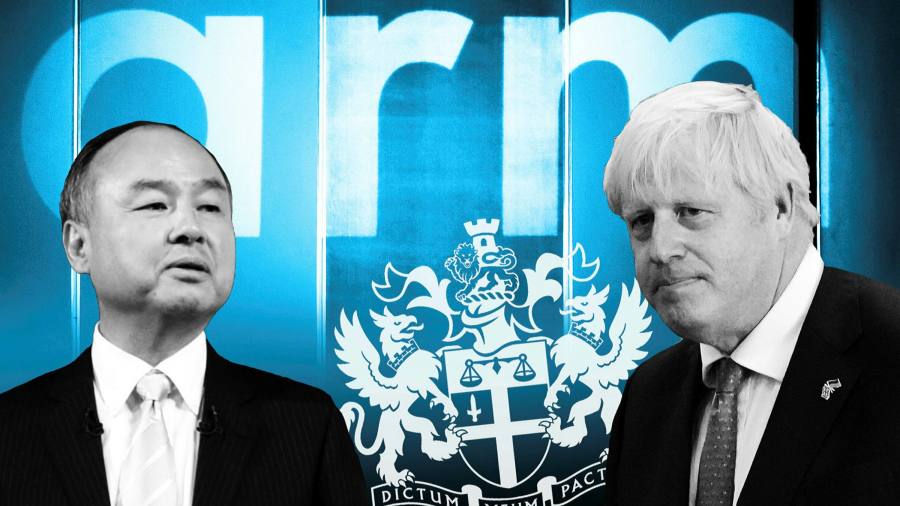 SoftBank has put on hold plans for a London initial public offering of Arm because of the political turmoil in the UK government, throwing doubt on Britain’s place as the future home of the Cambridge-based tech giant.

The departures have led SoftBank to pause discussions about a UK listing of Arm in the next year, according to people briefed on the talks. An Arm IPO would be one of the biggest-ever tech flotations for the London market.

The political upheaval could pave the way for SoftBank to pursue a more straightforward US listing, which Son had originally favoured.

SoftBank was in talks with officials and exchange executives over an unusual dual primary listing, in which it would have simultaneously floated in both New York and London, according to people with knowledge of the situation.

Companies have shunned this approach in the past because of the cost and complexity of effectively having to run two IPOs simultaneously, with prospectus and other regulatory requirements needed for both the US Securities and Exchange Commission and the UK’s Financial Conduct Authority.

Two people familiar with SoftBank’s thinking said that work on the London side of the IPO had effectively halted within the company. One of these people added that a London listing was looking less likely than it had in the past.

Bankers close to SoftBank have warned that the group only considered a share sale in London because of the strong incentives offered by the UK government, which had tasked officials with working out the right conditions for the listing, promising to make Arm a national champion for British tech.

London has been criticised for being unattractive to fast-growing companies given the potential for higher valuations and deeper pools of investor cash in the US.

Officials in the Department for Digital, Culture, Media and Sport and Department for Business, Energy and Industrial Strategy are still working on a package to attract an Arm listing, according to a person familiar with the government’s efforts.

Philp had been replaced by new digital minister Matt Warman, a former tech journalist, they added. Executives at the London Stock Exchange were also still working to convince SoftBank of the UK’s merits.

Grimstone, who quit the government after Johnson announced he would make way for a new prime minister in the coming weeks, led the lobbying efforts as minister for investment, including flying to Tokyo to personally meet Son.

One City executive close to the lobbying efforts urged the government to step up its efforts, saying: “The main ministers that are dealing with SoftBank have left. Gerry was instrumental.”

The ruptures within the government have also prompted fears within Whitehall that SoftBank will no longer feel obliged to bring Arm to London markets because the political pressure will ease over the summer months.

“It’s a concern now that Gerry has gone,” said one official. “There is a vacuum right now and [SoftBank] never really wanted to do it anyway; they just wanted to play ball with the UK government.”

Work on a dual jurisdiction Arm IPO had reached a “mature” stage in the UK, said an official close to the talks. This unusual route would mean that Arm could get index inclusion in both markets, which would boost the number of funds that could invest in the company, and means it would be fast-tracked into the FTSE 100.

A UK banker close to Arm said that a dual listing would not “be crazy”.

“Arm used to trade at a huge premium in the UK and it had a huge fan club when it was listed over here, and that group has never found anything else as attractive to buy. The first ever company that’s in the FTSE 100 and the S&P 500 — can you imagine how excited [Son] would be?”

One option would be to include a retail offering for the IPO to attract the sort of older and wealthier private investors who remember the early days of the company when it spun out of Acorn Computers in Cambridge.

SoftBank had recently invested in PrimaryBid, which provides a platform for retail investors to buy into IPOs, which one person said could be used as a means to attract private investors to the company in the UK. PrimaryBid last year worked on a British members’ offering for the US listing of private club Soho House.

Anand Sambasivan, chief executive of PrimaryBid, said: “A retail offer in the UK would recognise Arm’s distinctive British history, be well received by investors and represent a win for the country.”

SoftBank and Arm declined to comment. Arm has previously said it planned to keep its headquarters in the UK, regardless of where it lists.

The UK government did not immediately respond to a request for comment.

Video: SoftBank: piecing the puzzle together | FT Film
This article was originally published by Www.ft.com. Read the original article here.