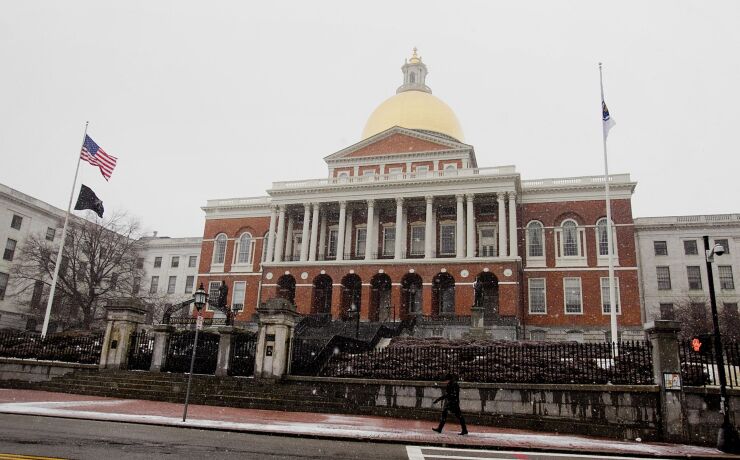 Next week’s planned sale of $2.7 billion of taxable business-tax backed special obligation revenue bonds by Massachusetts is being postponed as state lawmakers negotiate a bill that could affect the plan.

A bill was introduced earlier this week, according to a notice from Jefferies LLC and BofA Securities, joint book-running senior managers for the deal, that would allocate $300 million to the state’s Unemployment Insurance trust fund.

Its passage “may affect the size and structure of the bonds,” said the notice. “Accordingly, the Commonwealth has postponed the above-referenced sale until August.”

The $2.7 billion bond deal, designated as social bonds and billed as the largest ESG offering to price in municipal markets, sought to raise money to pay back $2.2 billion in federal loans Massachusetts took during the pandemic to cover increased unemployment insurance claims. Surplus funds raised were to be directed into the state’s UI trust fund.

“It’s money that would go into the Unemployment Insurance Trust Fund,” Amanda Lee, senior vice president at Jefferies LLC, said of the legislation. “Theoretically, you need to borrow fewer bonds in order to accomplish the same outcome.”

“It just made sense to just hold off until there was a resolution,” she said.

The fate of the bill is unknown, and the bond deal is likely to still set records when it reaches the market.

“It’s not a bad thing at all,” she added. “A potential new source was introduced.”

Both the state House and Senate must vote on the spending bill before the end of the session on July 31, and Gov. Charlie Baker would have to sign it.

The deal received AAA ratings from Fitch Ratings and the Kroll Bond Rating Agency and Aa1 from Moody’s Investors Service.