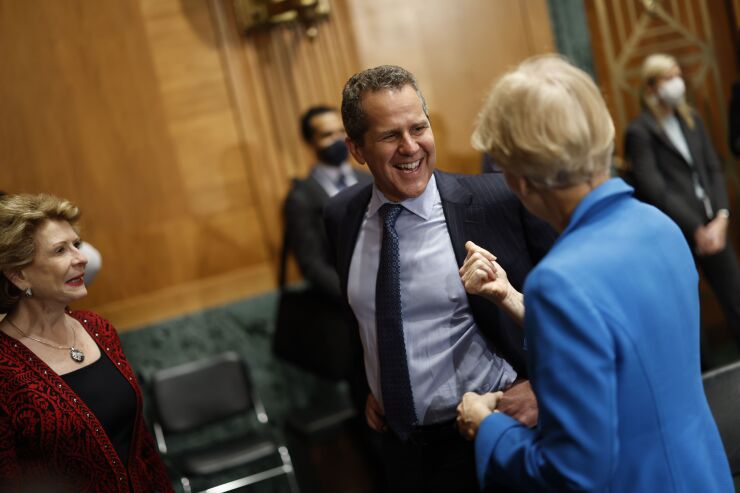 The former Treasury official and University of Michigan administrator’s confirmation gives the Federal Reserve Board a full complement of seven governors for the first time in nearly a decade.

Michael Barr, a former Treasury official and university administrator, has been confirmed as the next vice chair for supervision for the Federal Reserve.

The Senate confirmed Barr as a member of the Federal Reserve Board of Governors by a 66-28 vote Wednesday morning, followed by a 66-28 vote later in the day confirming his position as vice chair for supervision. His confirmation gives the Fed Board a full complement of seven governors for the first time since August 2013 and fills President Biden’s last remaining bank regulator vacancy.

Ahead of the vote, Sen. Sherrod Brown, D-Ohio, who chairs the Senate Banking Committee, lauded Barr’s experience crafting and implementing the Dodd-Frank Wall Street Reform Act as the assistant secretary for financial institutions in the Obama Treasury Department.

Brown, who said the vote comes during a “critical time for our economy,” with inflation running at a 40-year high, said Barr is well suited to safeguard the economy against potential threats. He pointed to Barr’s experience, which dates to the Clinton administration, as a staffer in the State and Treasury departments.

“Mr. Barr has worked for a quarter century to make our financial system safer and fairer,” Brown said. “He’s focused on developing and evaluating financial regulatory policies. Most importantly … he has a keen understanding of the type of risks that pose threats to our financial stability.”

Barr has worked at the University of Michigan since leaving government in 2011. He established a research center focused on financial policy and regulation and has been a dean within the university’s public policy program since 2017.

Established as a presidentially appointed and congressionally confirmed position as part of Dodd-Frank, the vice chair for supervision role sets the Fed’s regulatory and supervisory agenda. These duties include routine monitoring of individual bank holding companies, approving mergers and acquisitions and setting capital requirements.

Barr is only the second individual appointed and confirmed to the position, with the first being his predecessor, Randal Quarles, who was nominated by then-President Trump in 2017. The position has been vacant since Quarles’s term expired last October.

Upon being sworn in, Barr will have a host of matters to attend to in short order. These include implementing the last provisions of the Basel Committee on Banking Supervision’s global regulatory framework known as the Basel III endgame, or Basel IV, which is due to be implemented by early next year. Fed officials have previously said they would adjust existing capital requirements to make the Basel IV regulations “capital neutral.”

Barr also will revisit the supplementary leverage ratio, which dictates how much Tier 1 capital banks must keep on their balance sheet relative to their assets. Fed officials, including Chair Jerome Powell, have said the ratio likely needs to be recalibrated to account for the higher volume of deposits, also known as reserves, within the Fed system.

During testimony in front of the Senate Banking Committee in May, Barr said he would like to take on the Fed’s various bank capital considerations “as a whole” if confirmed to the board.

With a vice chair for supervision, the Fed will also be in a position to join other bank regulators, the Federal Deposit Insurance Corp. and the Office of the Comptroller of the Currency, on key reform issues, such as bank merger policy.

Barr was initially considered a front-runner to be Biden’s pick for comptroller of the currency, but his history of investing in and advising financial technology drew opposition from left-wing activist groups. The administration chose Saule Omarova, a Cornell University law professor, to lead the OCC, but she withdrew her nomination in the face of congressional pushback over her academic writings about communism. Both the OCC and FDIC are being led by acting directors, Michael Hsu and Martin Gruenberg, respectively.

Barr was the Biden administration’s second choice for the Fed’s top regulator. Its initial pick, Sarah Bloom Raskin, a former Fed governor and deputy secretary of the Treasury, withdrew from consideration in March in the face of staunch opposition in the Senate Banking Committee.

Republicans on the committee raised questions about Raskin’s involvement in a Colorado fintech receiving access to the Fed’s payment systems through the Reserve Bank of Kansas City. They refused to advance any of the White House’s Fed nominees until Raskin disclosed more information about her time on the board of Reserve Trust.

The controversy over Reserve Trust has led to a standoff between Senate Banking Republicans and the Kansas City Fed as well as a broader debate about the Fed’s handling of master accounts.

Barr must be officially sworn in before joining the board and the Federal Open Market Committee, for which he will be a voting member. It is unclear if that will take place before the FOMC’s next meeting, slated for July 26-27.