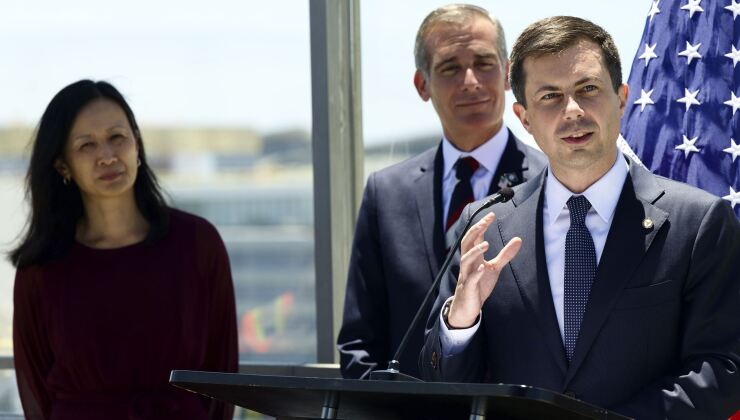 Los Angeles International Airport received a $50 million grant from the federal infrastructure bill for terminal road improvements, among the largest dispersed from the $1 billion allocated to 85 airports nationally.

The grants are the first allotment in a five-year, $5 billion airport terminal grant program funded by the Infrastructure Investment and Jobs Act, Transportation Secretary Pete Buttigieg said during remarks delivered Thursday on the roof of LAX’s UFO-like Theme Building. Airports are slated to receive $25 billion in three programs from the IIJA.

“You don’t often see improvements to terminal roadways,” Buttigieg said. “This is the first time since the Obama administration we have been able to fund things that directly affect the passenger experience.”

“Right here at LAX, we are proud to be providing $50 million to support the historic modernization effort that is already underway,” Buttigieg said. “These funds are going to help reconstruct some 40,000 feet of terminal roadway, and reconfigure the central terminal entrance so it’s easier to park, get a rental car, pick somebody up, or generally get into or out of the airport as easily as possible.”

Buttigieg acknowledged the $50 million awarded to LAX doesn’t seem substantial given the $15 billion in capital improvements underway at the airport.

Just one project at LAX, the 2.25-mile Automated People Mover, a train that connects to the city’s mass transit, has a price tag of $5 billion. Financing on that project won the Bond Buyer’s 2018 Deal of the Year for the Far West region.

Los Angeles Mayor Eric Garcetti joked in his remarks that this — and all of the other projects underway at LAX — will make it so the most hated question for Angelenos when friends visit will no longer be: “Can you pick me up at the airport?”

The improvements planned to the roadways “will help transform LAX, into a more accessible, visitor-friendly destination — and joins a long list of projects that are turning LAX into one of the premier airports in the world,” Garcetti said.

The grants awarded to smaller, regional airports on the list are more likely to represent a more significant part of their capital outlays, Buttigieg said.

He pointed to the $760,000 grant to Dexter Regional Airport in Maine that will replace a 50-year-old terminal with one that is modern, four times larger, safer, and more accessible.