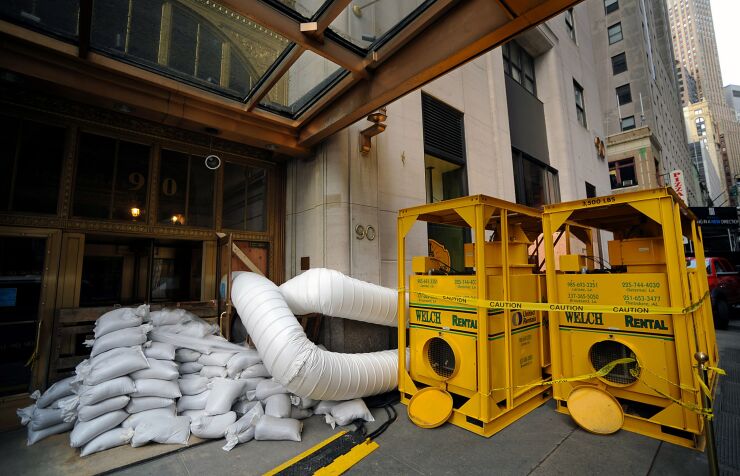 “While we continue to invest in resiliency and infrastructure projects to protect us for generations to come, the Rainfall Ready NYC action plan will help every New Yorker to protect themselves, their families and their homes,” Adams said.

While the city has been making some investments to improve resiliency, more frequent and extreme rainfall can produce amounts of stormwater runoff the city’s infrastructure was never designed to capture.

The plan expands “FloodNet,” a series of sensors designed to monitor the frequency, severity and impact of street flooding. The sensors are being installed in areas most vulnerable to flooding for real-time data collection, which will be accessible to the public later in July.

The plan encourages residents to use the latest stormwater flood maps to understand the likelihood of flooding in their neighborhood and to have an escape plan if needed.

The public is also urged to clear litter and debris from the curb and catch basins and to erect barriers to protect low-lying areas. DEP will provide sandbags and flood barriers to residents in at-risk neighborhoods.

“The design and construction of large infrastructure projects to manage our changing climate will take time to complete and Rainfall Ready NYC is meant to outline the shared actions that can be taken in the short-term to ensure public safety,” Aggarwala said.

“With hurricane season and summer under way, I also encourage New Yorkers to make emergency plans that best match their needs before extreme weather and other emergencies occur,” Iscol said.

New York City is one of the biggest issuers of municipal bonds in the nation. As of the first quarter of fiscal 2022, the city had about $38.13 billion of general obligation bonds outstanding.

That doesn’t include the various city agencies that issue tax-exempt and taxable bonds such as the New York City Transitional Finance Authority or the Municipal Water Finance Authority, which have $41.64 billion and $31 billion of debt outstanding, respectively.

Rating agencies have been increasingly taking climate and other environmental, social and governance issues into account when assigning ratings to a municipality.

The city’s GOs are rated Aa2 by Moody’s Investors Service, AA by S&P Global Ratings, AA-minus by Fitch Ratings and AA-plus by Kroll Bond Rating Agency. Fitch assigns a positive outlook to the city while Moody’s S&P and Kroll assign stable outlooks to the credit.

Almost 10 years ago, Hurricane Sandy hit the city and in 48 hours left 44 dead, destroyed about 300 homes, left hundreds of thousands without power and damaged infrastructure. The total damage was estimated at almost $20 billion.