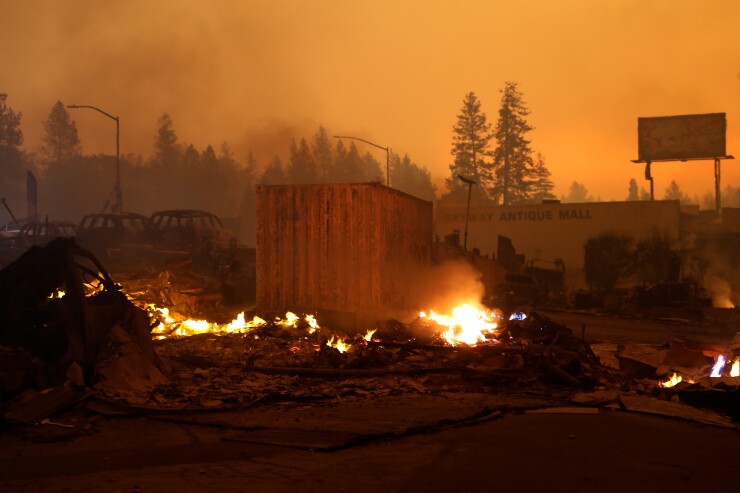 Bond default and impairment is famously low in the municipal bond market. But the case of Paradise, California, offers an example of the rising financial risks posed by climate and management decisions.

After the city was nearly destroyed in 2018 by California’s deadliest wildfire to date, the state stepped in to help the city’s redevelopment agency continue to make twice-annual payments on 2009 bonds that were backed by tax increment revenues.

But the state’s help ended earlier this year, and on June 1 the redevelopment agency reported an unscheduled draw on reserves to cover a payment on its 2009 bonds. The next day, S&P Global Ratings dropped its rating to CCC/negative from BB. Bond prices dipped. S&P noted that the city’s management had declined to tap other revenues, like PG&E settlement funds, to make the payment, a decision that the ratings agency said it considers a risk captured “under our environmental, social and governance factors, which is a key credit driver of the rating action.”

The bond prices, which before the fire hovered around 105 cents on the dollar, had tumbled to a low of 54 the month after the fire, before climbing back up to around the high 90s. After the city reported its unscheduled draw on reserves, the price dropped to 94 cents on the dollar. The upcoming December payment will largely drain the reserve fund, and it’s unclear whether the bonds, some of which go out to 2043, will remain whole.

The fresh risk of the bond default, even years after the fire, is a reminder of why disclosure related to environmental, social and governance factors is increasingly important to investors. But the rapidly evolving ESG landscape, coupled with the immense variety of municipal issuers and bond pledges as well as the market’s voluntary disclosure regime, hinders the development of uniform standards.

Even the terms of the debate have sparked confusion, with participants urging regulators and standard-setting bodies to more clearly delineate between ESG-related risk disclosure on traditional bonds and disclosure on ESG-labelled bonds, like green bonds, social bonds, environmental impact bonds, and sustainability bonds.

On the labeled bond side, there remains a lack of clear pricing benefit in the tax-exempt primary market regardless of the level of disclosure. But primary market ESG-labeled deals with greater disclosure do attract more investors compared to vanilla bonds, and a slight ‘greenium’ is becoming apparent in the secondary market.

Listen to Barry Fick, Executive Director of the Minnesota Higher Education Facilities Authority, who discusses a recent green bond versus plain-vanilla deal, and how it fared in a Bond Buyer podcast.

On the risk disclosure side, the debate falls into familiar territory: issuers push back against additional mandates and investors and analysts want more than a template paragraph in the official statement.

Despite the disagreements, most in the market agree that regulatory action is on the horizon. The Securities and Exchange Commission and the Municipal Securities Rulemaking Board have dialed up their focus, and the development of some type of standards seems likely.

Enforcing standards
SEC Chair Gary Gensler in March unveiled long-anticipated proposed rules for reliable and relevant ESG-related disclosure for certain companies. The commission lacks any explicit authority to mandate the content of disclosure by muni issuers, but many market participants have predicted that the corporate rules will in some way trickle down into the muni market.

The SEC can indirectly impose standards on muni issuers through regulation of underwriters and also through the enforcement of the anti-fraud provisions of the federal securities laws, a tool that could be used to shape a new disclosure regime.

“There’s a pattern of behavior,” said Lisa Washburn, chief credit officer and managing director at Municipal Market Analytics, referring to the SEC’s past enforcement actions on hot-topic issues like pension disclosure or timeliness.

“They have in the past taken some actions to assist the market in understanding what the expectations are,” she said. “If there were an event that impaired — not necessarily a default — the value related to a bond, and that bond issuer either knew of or discussed climate change and didn’t disclose it in their official statement, I could envision a scenario where a similar type of action could take place.”

The SEC’s Municipal Continuing Disclosure Cooperation program, which targeted continuing disclosure compliance, could be revived with a climate agenda, MMA suggested in its June 21 Weekly Outlook.

In June, speaking at the Government Finance Officers Association’s annual conference, the SEC’s Office of Municipal Securities Director Dave Sanchez told issuers that they should consider ESG-related risks the same way they weigh other risks, namely whether they pose a material risk to the revenue stream backing the debt.

“When we’re talking about climate risk and general disclosure, this is an area where there’s a lot of noise and discomfort,” Sanchez said. “The point right now is using the same principles you should use for other disclosure; you’re just looking at these like do they have a credit impact, a financial impact on revenues used to pay back the bonds. The rules have not changed, you’re just applying it to a different topic.”

What the issuer knows about its ESG risks is a key question as an issuer preps a deal, said Kevin Civale, a shareholder at Stradling Yocca Carlson & Rauth who acts as disclosure and underwriters’ counsel.

Issuers, particularly in Civale’s California-based practice, are well aware of climate risks, he said. But they often lack specific information relating to the impacts, severity or timing of climate change or how they could affect their credit or financial position.

If they lack that information, “federal securities laws don’t require them to speculate,” Civale said. But if they have more specific information — if they have commissioned studies, for example — then “the issuer needs to carefully consider whether more specific climate change disclosure is warranted,” he said.

Familiar tensions
The MSRB in December 2021 issued a request for information on ESG practices in the muni market, as part of a “broader engagement on ESG trends in the municipal securities market to give all interested stakeholders an opportunity to provide their feedback.”

The responses revealed some themes across the market, and many respondents seem to support development of voluntary best practices. The Government Finance Officers Association in 2021 unveiled best practices that recommends issuers disclose “material ESG risks or factors having a nexus to credit or the ability to repay bonds,” as Timothy Ewell, chair of the GFOA Committee on Governmental Debt Management, said in an October Bond Buyer guest commentary .

The MSRB’s role in developing standards remains unclear, as it lacks authority over issuers and it’s uncertain what the board plans to do — if anything — with the RFI. The MSRB said it will be releasing a comprehensive summary of the comments in July, with a board member saying the group is “not looking to lead with a regulatory foot.” The MSRB declined to comment for this article.

Whatever the MSRB’s actual role is, the 52 responses it received for its RFI illustrates how the ESG debate is part of long-standing tension in the market between investors who would like to see more disclosure and issuers who argue it’s costly and possibly irrelevant.

The State of Utah, leading a coalition of 23 states, put it bluntly: “The MSRB has no business seeking information that it cannot put to any lawful use.”

On the other side, Nuveen, one of the market’s largest investors, said in its response that it supports expanded disclosure. “We believe all investors stand to benefit from expanded access to reliable, comparable ESG data from municipal issuers,” the firm said.

Labeled bonds
During his GFOA speech, Sanchez said disclosure issues may be more complicated for bonds that carry an ESG label either by the issuer or a third-party vendor. One of the fastest-growing sectors in the muni market, green, social and sustainability-labeled bonds totaled just under 10% of muni issuance in 2021, for a total of $46.5 billion, according to the Climate Bonds Initiative. That’s up from 5.5% in 2020.

For designated ESG bonds, the key disclosure is a discussion of the use of proceeds, said Candace Partridge, CBI’s social and sustainability bond data manager.

“I usually have at most a paragraph to go off of, it’s usually just one or two sentences, and when you’re doing something like affordable housing, there’s a lot more nuance we need to unpack,” she said, like impact on property values, gentrification or if it will actually help disadvantaged communities.

Green bonds make up nearly 70% of ESG-labeled muni bonds, according to CBI. Meanwhile, the market this year saw its first and only issuance of a so-called sustainability-linked bond, when the Arizona Industrial Development Authority issued $200 million of unrated, taxable, sustainability-linked revenue bonds in February. The financing was on behalf of NewLife Forest Restoration LLC, a wood product manufacturing company, for a forest restoration project. The bonds’ yields are tied to the company’s ability to meet sustainability goals. The 2028 bonds carried 9% coupons and the 2047 bonds had 11% coupons, and the interest rates will rise by 150 basis points or more if the company fails to meet certain sustainability targets, according to the official statement.

Despite the growing appetite for ESG-linked bonds, a pricing advantage remains unclear, particularly in the tax-exempt primary market. A clear pricing advantage would help to develop the sector in part because it would cover the increased costs of issuing green bonds, like obtaining certification, Partridge said.

“This is taxpayer money, we all understand that,” she said. “A pricing differential would help because you have to cover the transaction costs somehow.”

Issuers should start simply and view disclosure as an opportunity to tell their story, said Mike Brown, the environmental finance manager for the San Francisco Public Utilities Commission, during a June 16 webinar on green, social and sustainable municipal bond opportunities hosted by the CBI.

“If we’re saying projects are green and making those statements to the investor community, they really need to be green projects,” Brown said. The SFPUC annually discloses project spending as well as project impacts, he said. “There’s a lot of opportunity for U.S. munis, because there are projects that are being financed by the bonds, but often there are other kinds of benefits being accrued to the community,” like new jobs or arts and education outcomes. “It’s an opportunity to showcase all the positive things you’re doing for the community.”

The heterogenous nature of the muni market, with 50,000 issuers of all sizes and resource levels, complicates the landscape, but increasingly, issuers want to step up their disclosure because they realize it’s important, Civale said.

“Issuers very frequently say this is something that our stakeholders care about, and at the end of the day, most folks will do it because they frankly think it’s the right thing to do,” he said.