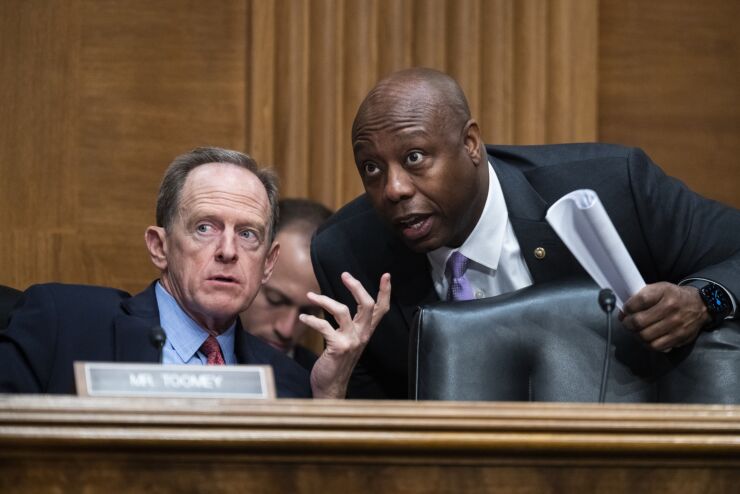 Sen. Pat Toomey’s effort to reform the 12 regional Federal Reserve banks will not join him in retirement at the end of the year.

Sen. Tim Scott, R-S.C., who is expected to succeed Toomey as the ranking member on the Senate Banking Committee, joined the Pennsylvania Republican in calling for more accountability from reserve banks in a Tuesday letter sent to Esther George, president of the Federal Reserve Bank of Kansas City.

The letter is Toomey’s latest effort to acquire more information about the regional Fed bank’s decision-making process regarding its granting the Colorado fintech Reserve Trust a Federal Reserve master account. To date, Scott has not weighed in on the matter, but in the letter, joined by Sens. Cynthia Lummis, R-Wyo., and Thom Tillis, R-N.C., he said there’s a “pressing need to reform the regional Fed banks to make them more transparent and accountable to Congress.”

The letter went on to further affirm committee Republicans’ commitment to the issue. Lummis and Tillis had previously expressed concern about the Kansas City Fed’s handling of master accounts, raising the issue with Fed Chair Jerome Powell during a hearing last week.

The letter is at least the fifth sent by Toomey to the Kansas City Fed regarding Reserve Trust. The topic first arose in January, ahead of the confirmation hearing for Sarah Bloom Raskin, the Biden administration’s then-nominee for the Fed’s vice chair for supervision.

A former Fed governor and Treasury official, Raskin sat on Reserve Trust’s board in 2018 when it was granted access to the Fed’s payment system. It remains the only known fintech to have had a master account.

During Raskin’s hearing in February, Lummis and others pressed her about communications she had with the Fed about Reserve Trust while on the company’s board. Raskin provided few details during and after the hearing, leading Republicans on the committee to refuse to advance any of President Biden’s Fed nominees until their questions were adequately answered. Raskin eventually withdrew her name from consideration.

The handling of the Reserve Trust account has fed into a greater debate about which institutions should be entitled to master accounts and how much say individual reserve banks should have in the matter.

Toomey has remained adamant about getting answers from the Kansas City Fed and establishing greater oversight rules for reserve banks moving forward. Earlier this month, he revealed that the Kansas City Fed quietly revoked Reserve Trust’s master account sometime after defending the decision to grant it in February.

Toomey sent a letter to George requesting documentation and a briefing on what led to this decision. George declined the request, writing that the information constituted confidential supervisory information and therefore could not be disclosed.

In their latest response, Senate Banking Republicans, accused George of misleading Congress by backtracking on her previous assertion that the Fed had no supervisory authority over Reserve Trust.

The Fed has supervisory authority over bank holding companies and federally insured banks, both of which are required to have master accounts. Reserve Trust is a state-chartered trust that is not subject to federal supervision. Academics and policy specialists alike found the Fed’s rationale for denying Toomey’s request to be curious.

Senate Banking Republicans said George’s reversal hurt the credibility of the Kansas City Fed, but noted that “obstructionism” from reserve banks has become “all too common.”

A comprehensive digital-assets bill presented by Lummis and Sen. Kirsten Gillibrand, D-N.Y., would also strip the reserve banks of their discretion in granting master accounts, guaranteeing all state-chartered institutions access to the Fed’s payment system. Some policy experts believe this is already called for under the letter of the law and the Fed is overreaching by picking which firms are eligible and which are not.

With the backing of Scott, who is poised to be either the minority leader or chair of the Senate Banking Committee in 2023, these legislative initiatives remain viable. Especially if, as Toomey has suggested, they have bipartisan appeal.