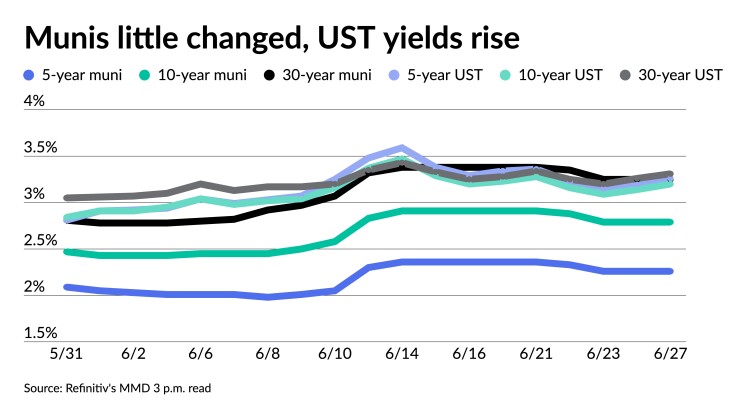 Municipals were lightly traded and little changed steady Monday, while U.S. Treasury yields rose and equities ended in the red.

“Although we had a small rally, we should still should understand the fact that we are still not at the bottom, but we are almost there,” said Jason Wong, vice president of Municipals at AmeriVet Securities. “With mounting concerns of a recession and the rally in Treasuries in the last two weeks, we could see munis follow suit as investors are starting to see buying opportunities.”

Average daily Municipal Securities Rulemaking Board trade volume rose 8% last week from the week prior and was 44% higher than the one-year average. Average daily fixed-rate bond trading was up 10% from the week ended June 17, said Pat Luby, a senior municipal strategist at CreditSights.

He notedthat the pace of institutional bid wanteds slowed down last week, with the average daily total par amount down 26% from the prior week. They were still 45% higher than the one-year daily average, per Bloomberg data, he noted.

“The outperformance of munis undermined the relative value of tax-exempts versus corporates,” said Luby.

“Based on the BVAL benchmark yield curves, for investors subject to the 21% federal corporate income tax, tax-exempt munis are still offering a modest advantage at the long end of the double- and single-A yield curves,” he noted.

“If this week’s higher-quality new issues are priced at a concession to the benchmark curves,” he said, “yields could be competitive with comparably rated corporates, which should attract incremental demand from credit investors seeking to add muni risk to their portfolios.”

The calendar is larger to end the quarter at about $8 billion while 30-day visible supply sits at $13.47 billion.

“Some callable, five-year moral obligations of states currently trade with highest-bracket taxable equivalent yields of nearly 6%,” while “certain high-quality dedicated tax structures are presently offering 10-year yield ‘kicks’ that touch TEYs of almost 9% for the high-tax residents of their respective sovereigns,” they said.

Yield levels, they noted, may keep rising while volatility persists, but they think it “continues to be an advantageous period for buy-and-hold investors of individual municipal bonds to gradually, but selectively, add exposure to our market.”

“Maintaining such a long-term perspective may prove itself to be beneficial now that recession risks loom, municipal supply may soon decline, and after the Fed recently stressed that it is ‘strongly committed to fighting inflation,” Gastall and Helsing wrote. “Rather than succumbing to tunnel vision, we feel it’s important to consider the entire investment equation and maintain a long-term focus.”

Ten-year triple-A-rated munis, they said, “are currently offering nearly 90% of the yield of 10-year USTs,” in spite of offering the federal tax exemption. The long-term average for this relationship is a lower 84%, they noted.

“Investor interest and primary market activity often accelerate in the spring, which frequently converges with lower reinvestment demand due to the absence of mid-year/year-end coupon and maturity payments,” they said.

A bearish investment setting and elevated ratios often represent a “buy signal, particularly when strong revenue collections and the passage of healthy stimulus packages have helped to bolster many municipal credit profiles throughout the last two years,” according to Gastall and Helsing.

Short-end muni yields are now near their highest levels since 2008. “Not only are nominal rates of return higher, but price volatility may be relatively limited for bonds whose maturities are set to be redeemed in the near future,” they said.

Moving forward, they noted that “municipal prices may exhibit resiliency if economic recession risks increase, new-issue supply declines this summer, and if the Fed continues to aggressively combat inflation.”

The Dormitory of the State of New York (/BBB-//) is set to price Wednesday $148.815 million of Yeshiva University revenue bonds, Series 2022A. Goldman Sachs & Co.

Pueblo County, Colorado, is set to sell $126.355 million of Jail Project certificates of participation, Series 2022A, at 12 p.m. eastern Thursday.