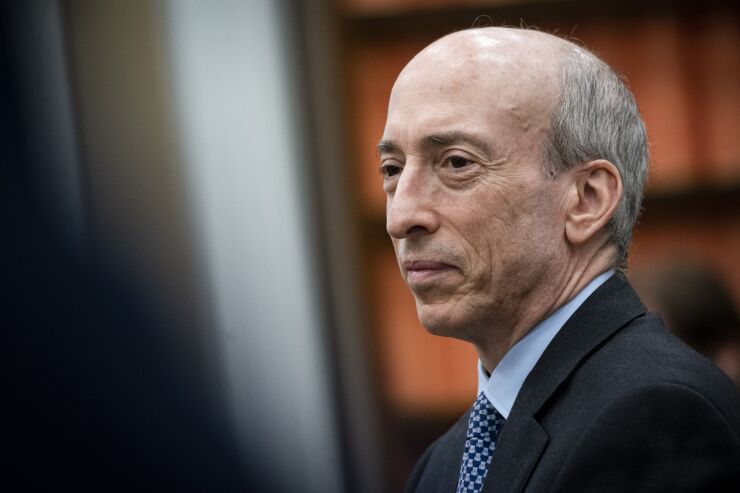 The American Securities Association Friday sent a letter to the Securities and Exchange Commission outlining its opposition to changes to the post-trade reporting window for the municipal securities market.

ASA’sletter targets a potential SEC move that would require all muni bond trades be reported to the Municipal Securities Rulemaking Board within one minute of being executed. The current rule requires all trades to be reported to the MSRB within 15 minutes, a rule that’s been in place since 2005.

The move would be an unnecessary mandate for a “well-functioning and transparent market that has weathered multiple crises over the last three decades remarkably well,” said the ASA, a trade association that represents the capital markets interests of small and regional financial services firms.

SEC Chair Gary Gensler in April floated the idea of shortening the bond trade reporting window in the fixed-income markets as a way to increase transparency and promote liquidity in the markets.

“The academic research overwhelmingly finds that post-trade transparency improves efficiency and competition in the markets they serve,” Gensler said. “Currently, a trade has to be reported as soon as practicable but no later than within 15 minutes of the time of execution. Why couldn’t the outer bound be shortened to no later than, for example, one minute?”

At its most recent quarterly meeting, in April, the MSRB voted to issue a request for comment on a review of the 15-minute trade reporting window, which is part of Rule G-14.

The majority of muni bond trades are reported within the first 10 minutes, the ASA said, citing MSRB data. Most trades are reported more quickly than that, even within the proposed one-minute window, but said a mandate is unnecessary because “it is unclear how such a short timeframe would benefit investors or increase transparency, especially given the episodic nature of trading in this market.”

In the primary market, the complex nature of new-issue deals should make them exempt from any reporting timeframe, the ASA argued, as it’s difficult to quickly report what happens when a deal gets “dropped” into the syndicate, which then distributes them to other buyers and/or dealers.

“Given how rapidly the capital markets evolve, it is reasonable to update regulations as necessary,” the group concluded. “However, broad new mandates that disrupt an otherwise well-functioning market can inflict great harm on investors and raise costs for municipalities looking to issue debt. We urge the SEC to only address true market failures through any proposed regulation.”