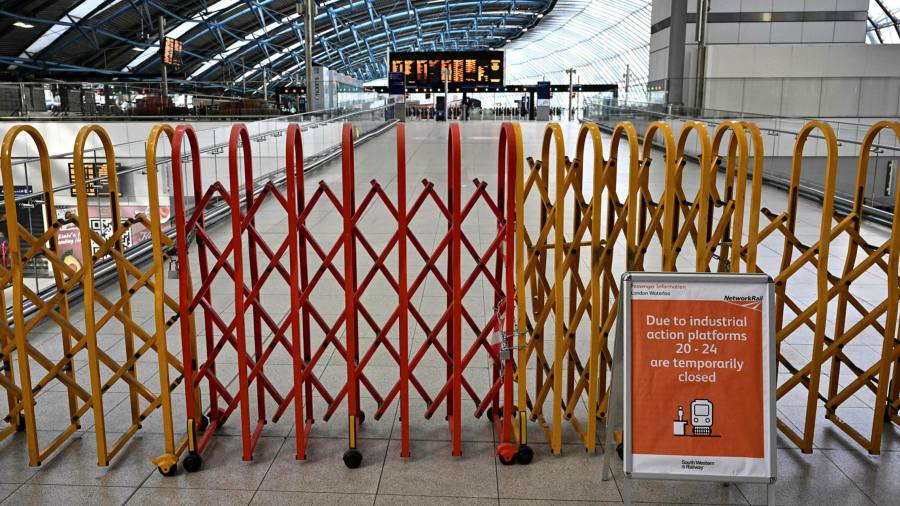 The second of three one-day rail strikes across Britain will go ahead on Thursday, the union at the heart of the dispute said, after talks to resolve the dispute broke down.

Mick Lynch, head of the RMT union, criticised transport secretary Grant Shapps for the impasse in the negotiations between the RMT, the train operators and Network Rail, which owns the infrastructure.

State-owned Network Rail wrote to the RMT on Monday that it was going ahead with 1,800 job cuts, “the vast majority” of which would be voluntary.

“Grant Shapps has wrecked these negotiations by not allowing Network Rail to withdraw their letter threatening redundancy for . . . our members,” he said.

“We will continue with our industrial campaign until we get a negotiated settlement that delivers job security and a pay rise for our members that deals with the escalating cost of living crisis.”

Some 40,000 RMT members at Network Rail and the 13 train operators will not work on Thursday following a stoppage on Tuesday during which only about 20 per cent of services ran. They are also due to strike on Saturday.

Andrew Haines, Network Rail’s chief executive, said “it was a complete fabrication” that the government was involved in the decision not to withdraw the letter.

“There is nothing remotely to justify why they have chosen to walk out . . . it is just absurd.”

Haines said there was a “really credible way to get out of this” if the RMT accepted sweeping modernisations, particularly to maintenance roles. “But they wouldn’t even talk about it,” he added.

Labour leader Sir Keir Starmer called on Boris Johnson to “get round” the negotiating table and “get the trains running” at prime minister’s questions in the House of Commons.

But Johnson said it was for the train companies to hold talks with the RMT, adding that Starmer “hasn’t even got the gumption” to speak out against the strikes.

Justice secretary Dominic Raab said the government and the rail industry had to “hold the line” in the talks and push to “reform the way the railways operate”.

Speaking on LBC, he added: “The one thing that will keep inflation higher for longer and undermine pay packets for longer is if we have spiralling public sector pay increases beyond what is responsible.”

In contrast to the firm line on pay awards, ministers have this week confirmed that the basic state pension will rise next April by the rate of inflation in September, which is likely to be close to 10 per cent.

The government is confronting public sector pay demands on other fronts: the UK’s main teaching unions are also threatening strike action this autumn unless they are granted a 12 per cent rise.

Lynch earlier said his priority was to ensure no compulsory redundancies, and that he would then move on to discuss modernising terms and conditions and pay rises.

The RMT leadership is pushing for pay rises of 7 to 8 per cent to compensate for inflation that hit 9.1 per cent in May, a 40-year high.

Network Rail also told unions it would formally start a consultation on 1,800 job losses and “dumping outdated working practices”, but said the “vast majority” of these could be achieved through voluntary redundancy.

The TSSA rail union, which represents clerical, supervisory and station staff, said on Wednesday that its members at Merseyrail had voted to accept a 7.1 per cent pay deal in a separate negotiation, calling it “a sensible outcome to a reasonable offer”.

Manuel Cortes, TSSA general secretary, said the deal showed unions were “in no way a block on finding the solutions needed to avoid a summer of discontent on the railways”.

Merseyrail is controlled by the Labour-led Liverpool City Region combined authority and is not part of the national franchise system.

Many people avoided disruption on Tuesday by working from home. The average office occupancy in London dropped sharply to just 9 per cent, said Freespace, the office services provider, down from 42 per cent the week before.

Average office occupancy across the UK on Tuesday was higher, at 22 per cent, but this was almost half the level of the week before.