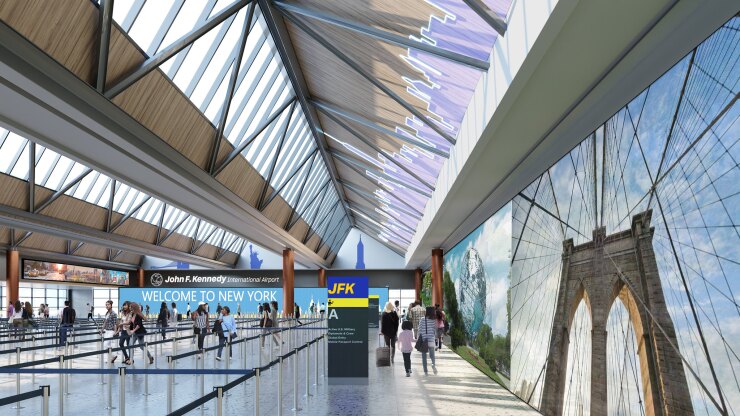 The team developing John F. Kennedy International Airport’s flagship new terminal will tap the municipal bond market for more than $6 billion through 2026, with more debt on the horizon for future phases of the high-profile project.

The New Terminal One private consortium overseeing the $9.5 billion development closed June 10 on a $6.63 billion bank loan with a group of lenders led by Mitsubishi UFJ Financial Group Inc. On top of the loan, NTO’s sponsors will kick in $2.3 billion of equity, for a total price tag of $8.4 billion for the first phase of construction.

With the funds in hand, the team will break ground this summer on the new 2.4 million square-foot terminal, which will anchor the south side of the airport.

The plan is to refinance the bank loan ahead of its 2027 due date with multiple issuances of long-dated, fixed-rate, tax-exempt or taxable revenue bonds starting in mid-2024 or earlier, said NTO acting CFO Marc McGrady. Taxable options include private activity bonds.

“We would anticipate being an active issuer in the tax-exempt market,” McGrady said. “We are fully financed for this initial phase through bank debt and equity, and we intend to refinance that bank debt during the construction period when the market is attractive to us. We’re actively monitoring both the tax-exempt and taxable markets because we’re agnostic” about which one to tap, he said.

The development is one of four P3s that the Port Authority of New York and New Jersey has launched as part of an $18 billion redevelopment of JFK, one of the nation’s busiest airports and a top international gateway to the U.S. NTO’s design-build-finance-operate-maintain project is the largest P3 in the U.S., with market participants watching it as a model for other U.S. airports.

The five-year $6.63 billion bank loan will finance the first phase of the project, called Phase A, which will cover about two-thirds of the total development, including a new arrivals and departure hall and 14 out of a total of 23 new gates. Its set to open to passengers by 2026. The following stages, Phase B1 and B2, will require additional debt, though the size and form have not been determined. Completion for the entire terminal is set for 2030.

NTO already has a finance team in place to tap the market.

Citi will be the book-running senior manager on the initial tax-exempt deal, with Loop Capital Markets as co-senior manager. Co-managers will include some of the lenders under NTO’s bank financing and several MWBE firms, McGrady said.

The bonds will be on par with the bank debt and will be secured by net project revenues and the mortgage on NTO’s lease with the PANYNJ, which runs through 2060. The revenues are derived largely from per-passenger charges from airlines and concessions.

Certain PANYNJ payments, like concession revenue sharing and ground rents, will be paid before debt service, according to Fitch Ratings.

The $6.63 billion of bank debt is a five-year term loan with two tranches that total $6.33 billion, along with a $200 million liquidity facility, $50 million working capital facility and $50 million security deposit that will be borrowed by the New York Transportation Development Corp., according to ratings agencies.

Last week’s financing closed days after the PANYNJ board approved a new lead investor in the project at a special board meeting on June 3. Spanish firm Ferrovial S.A. took a 96% stake in The Carlyle Global Infrastructure Fund’s 51% stake in JFK NTO LLC. The move gives Ferrovial a controlling position over most NTO management decisions.

In addition to Ferrovial/Carlyle, the other private firms are Johnson-Loop Capital Infrastructure, with 30% of the ownership, and Ullico, with 19% ownership.

“The construction of this new state-of-the-art terminal at JFK is key to our vision for a new era in New York,” Gov. Kathy Hochul said in a statement after last week’s financial close.

“The stable outlook reflects Moody’s expectation that Phase A of the project will be completed with limited delays and that terminal usage will generate at least a total [debt service coverage ratio] of 1.4 times including subordinated and deferrable payments to the PANYNJ under the lease,” Moody’s said in its report.

Fitch said that the financing plan “entails a rising debt service payment profile coupled with refinance risk,” due to the plan to take out the loan with long-term debt, adding that “incremental debt for a future phase B1 and B2 expansions could raise overall project leverage.”

The City of New York owns JFK and leases the property to the PANYNJ under a lease through 2060.