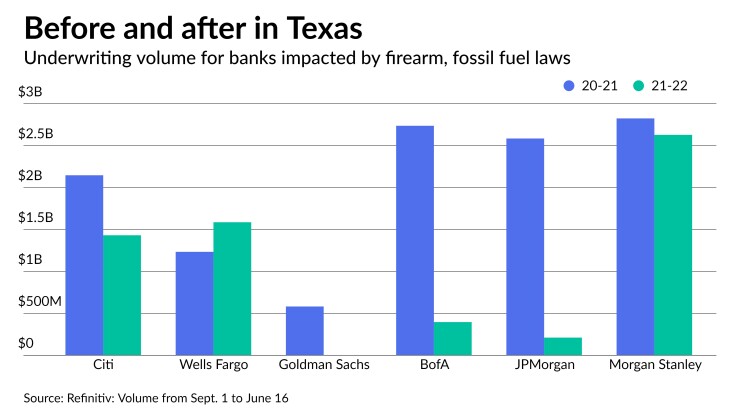 Texas is getting closer to producing a list of financial companies that it deems to be boycotting energy businesses — a move that could further diminish the number of big banks eligible to underwrite municipal bonds in the state.

The looming list and a law barring banks that “discriminate” against the firearm industry from deals have already sidelined certain underwriters, resulting in costlier bond sales, a study found.

Under laws that took effect Sept. 1, companies must verify they are not boycotting or discriminating against the two industries as a requirement for contracts, including bond purchase agreements, valued at $100,000 or more with the state and local governments.

Texas Comptroller Glenn Hegar sent inquiries earlier this year to 158 financial companies, including seven banks that underwrite muni bonds, about their treatment of the fossil fuel industry as an initial step toward compiling a list for disinvestment and contract purposes of companies that boycott.

The final deadline for responses was June 10 and a Hegar spokesman said a list could be compiled before the Sept. 1 deadline set in the law.

Some major banks, including Citigroup and Bank of America, adopted various firearm policies in 2018 after a gunman murdered 17 people at a Parkland, Florida, high school.

Meanwhile, the cost of the laws is being calculated. Texas issuers will pay an estimated additional $303 million to $532 million in interest on the $32 billion they borrowed from September through April, according to a working paper due to be vetted at a Brookings Institute municipal finance conference next month.

“We show that affected issuers are more likely to issue through a negotiation than an auction, receive fewer and less competitive bids from underwriters, raise less financing, and incur higher borrowing costs after the state prohibits banks with ESG policies from operating in the market,” it concluded.

The exit of big banks from the Texas market also denies issuers much larger national and even international distribution networks for their bonds, said Daniel Garrett, assistant finance professor at the University of Pennsylvania’s Wharton School, one of the paper’s authors.

The rankings of Goldman Sachs, JP Morgan Chase, and Bank of America as underwriters in Texas dropped since September, compared to the same period in 2020-21, as they have been largely absent from that state’s muni market, according to Refinitiv data.

Morgan Stanley and Citigroup remained in the top 10, although the volume of debt they underwrote has decreased. Wells Fargo’s ranking moved up to eighth place from eleventh in the previous period amid higher volume. Raymond James ranked first and RBC Capital Markets was second during the nine and a half month period.

Bond issuance out of Texas totaled $52.57 billion in 2021, the second biggest amount of debt in a state, trailing only California.

Martin Luby, associate professor of public affairs at the University of Texas at Austin, said the laws’ impact will depend on how many underwriting firms are ultimately affected.

“Governments need to recognize and accept that if they aim to advance social policy through procurement processes that limit participation of financial firms, there may be a significant impact to taxpayers in terms of higher borrowing costs,” he said.

But Tom Giovanetti, president of the Irving, Texas-based Institute for Policy Innovation, a free-market think tank, said he expects red state politicians to continue to push back against corporate ESG policies even if there is a cost.

“The view now is it’s time to stand up to what some people might call wokeness or whatever being done by major corporations,” he said, adding it is economically harmful to use corporate governance as a way to bypass the legislative process and get a political agenda “through the back door.”

Hegar’s office declined to comment on the study. Gov. Greg Abbott’s press office did not respond to requests for comment.

In response to the comptroller’s inquiry, JP Morgan, Wells Fargo, Goldman Sachs, Morgan Stanley, and RBC acknowledged having net-zero financed emissions goals by 2050, but said they do not boycott energy businesses, according to letters obtained through a freedom of information request.

Because responses from UBS and Barclays were marked confidential, they were referred to the attorney general for a determination if they can be made public, according to the comptroller’s office.

The comptroller’s office is not disclosing the process for determining which companies will end up on the list of boycotters.

A notice to bond counsel from the attorney general’s office in April further disrupted the Texas market. It said investment banks’ verifications that they are in compliance with the boycott law are under review due to the comptroller’s inquiry.

“These firms are in limbo, so they’re just not getting hired,” said a muni market observer who asked not to be named.

The Texas Department of Housing and Community Affairs cited the review for removing Barclays, RBC, and Morgan Stanley from its $190 million  bond sale last month.

Despite uncertainty if any of the banks will land on the boycott list, the Texas Natural Gas Securitization Finance Corp. last month selected Morgan Stanley as a co-senior manager and Barclays and UBS as co-managers for $3.4 billion of taxable bonds it plans to sell in August.

The firearm law empowers the comptroller to exempt the state’s tax and revenue anticipation note competitive deals from the contract provision. Hegar told The Bond Buyer in March that the state will probably not sell TRANs this year due to strong revenue collections.

West Virginia Treasurer Riley Moore announced on June 13 that six unnamed financial companies were informed that his office made an initial determination that they appear to be boycotting fossil fuel businesses. If any ultimately end up on a list of boycotters, the law allows the treasurer “to disqualify restricted financial institutions from the competitive bidding process or from any other official selection process” for banking contracts. It was not clear if those contracts include bond purchase agreements.