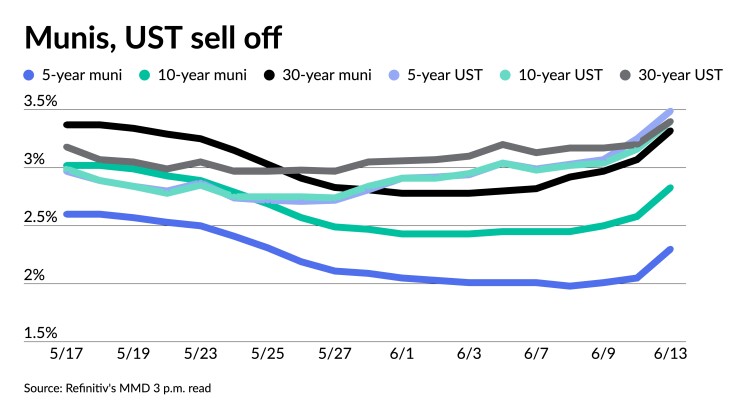 Municipals were hit hard Monday with a quarter-point selloff as munis could not ignore the continued U.S. Treasury selloff and the start of a bear market for equities as inflation-led recession fears grow.

Municipals saw cuts up to 25 basis points, though some particular secondary prints pointed to larger losses. This is the largest one-day change in triple-A yields since March 2020 when the market experienced as high as a half-point one-day move. UST yields rose up to 25 basis points, resulting in USTs 10 years and in rising to decade highs.

“You could argue that we were oversold for a time leading up to that second-to-last-week of May so the slightest sign of performance felt uplifting and contagious,” a New York strategist said. “That might have been too fast; we were a bit overbought. But today is a slaughter.”

Peter Block, managing director of credit strategy at Ramirez & Co., noted prior to the onset of the pandemic, the market had outsized selloffs in 2013 (Taper Tantrum), 2011 (Meredith Whitney) and 2008 (the Great Recession).

“Of all the selloffs only 2011 was a muni-centric scare with Meredith Whitney’s incorrect ‘billions and billions’ call along with the Master Settlement Agreement tobacco downgrades,” Block said.

“This particular move today (and really, the pain we’ve had since the start of the year) is unfortunate for this market because it is not based on the asset class itself,” the New York strategist said. “It’s purely a UST/Fed/inflation-led selloff. Retail is scared. CPI shook the markets Friday and faith in the Fed is faltering. It’s an all-out selling rampage out there and munis are being swept along.”

“What a difference a week makes,” said Jeff Lipton, managing director of municipal credit and market strategy at Oppenheimer Inc., as the 10 and 30-year MMD benchmark yields have risen by 38 and 52 basis points, respectively, from a week prior.

“The recession narrative may regain ground with a return to the ‘flight-to-quality’ bias and so any rally in the Treasury market could very well escort muni prices to higher levels,” he said. “As we enter the summer months, muni market technicals will be the guiding force with demand outstripping supply, thus creating a more supportive tone that could catalyze a cycle of positive fund flows as cash is ripe for application into the asset class.

Against this backdrop, Lipton said, muni investors are positioned to “take advantage of higher yield levels than were available just a short while ago.”

While ratios dipped below 100% not all that long ago, “benchmark 10- and 30-year relative value ratios still offer a compelling opportunity,” particularly if “ratios become more expensive from their current levels,” he said.

“Today’s market is decidedly negative as the municipal market is selling off in sympathy with Treasures,” Roberto Roffo, managing director and portfolio manager at SWBC Investment Services, LLC said Monday.

And this could only be the beginning of the largest sell-off in over two years.

“It’s clear that the bottom for bond markets is not over as yet,” said Vikram Rai, head of Citi’s municipal strategy group.

But this didn’t stop some investors from taking advantage where possible.

“Professional investors are trying to buy cheaper bonds as the municipal market is entering a period where it has historically done well due to technical factors,” Roffo said.

Roffo said this year is no different, as there is a significant amount of cash coming into the market due to coupon payments, calls and maturities. Additionally, if the market begins to receive steady cash flow that would give a solid footing to municipals, he noted.

Others said it will be a somewhat quieter week with a lower-than-usual primary market calendar, as well as the upcoming Juneteenth holiday.

“This could change, though, depending on outflow and volatility dynamics,” said Shaun Burgess, portfolio manager and fixed income analyst at Cumberland Advisors.

“The short end is seeing good demand whereas longer-dated paper is struggling as Treasuries sell-off and the Fed is set to hike interest rates later in the week,” he added.

The hike — expected to be 50 to 75 basis points — as well as inflation are dominating conversations and dragging on the municipal market, according to Burgess.

“We think this could create some opportunities, especially at the 4% exempt level, “ Burgess said, adding, however, that investors should remain cautious putting money to work due to the resumption of fund outflows.