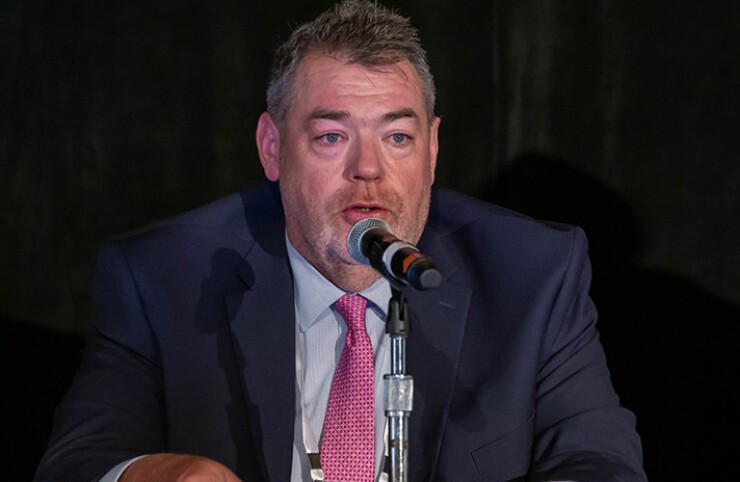 Wisconsin Capital Finance Director David Erdman will retire in July after a 32-year career with the state, the last seven in the role of debt manager during which the state won upgrades and his stature as an advocate for the issuer community grew.

Erdman plans to leave the state July 2 and on July 5 will join a “growing” municipal advisory firm which he declined to name. After Erdman turned 55, he qualified for retirement — which he likes to point out will be paid from a system that is 100% funded — and is ready for a new challenge after 28 years in the capital finance office.

Multiple firms in the public finance realm, both investment banks and advisory firms, approached Erdman. He talked to three and settled on an advisory firm.

The state uses both negotiated and competitive bidding for sales and Erdman manages a handful of various general obligation, revenue-backed, and floating-rate programs and he’s active in the Government Finance Officers Association’s debt committee, so he brings a depth of experience on a range of issues to the table.

Erdman said his role on the GFOA’s debt committee and with the National Association of State Treasurers allowed him to give voice to issuer concerns and it rose in tone as his years progressed.

“It has allowed me to convey issuer thoughts and concerns to regulators and others who have an impact on public finance,” Erdman said.

Erdman has also worked to promote more diversity and inclusion on state bond deals, both through appointments and subcontracting. Gov. Tony Evers signed an executive order that encourages those efforts.

After naming the team for a recent state bond refunding, Erdman decided it would serve as a good vehicle to act on a diversity and inclusion goal that had been on his mind. The end result was a crew almost exclusively made up of women. In cases where a woman wasn’t tapped to represent a firm, the lead members of the team included Black professionals.

During his tenure, Erdman counts involvement in the preparation of legislation, disclosure, sale, issuance, refunding, and other monitoring of nearly $51 billion of state obligations since 1994.

Erdman looks back at his tenure and calls the tougher bond structures the most satisfying, including the restructuring of the state’s original tobacco bond securitization and his role on non-state deals backed by a state moral obligation pledge, like the Wisconsin Center District’s 2020 convention center restructuring and expansion deal that sold amid the COVID-19 pandemic.

The state earned several upgrades over the past year — one from Kroll Bond Rating Agency to AAA — but he points to state policies and economic health instead of taking credit. The upgrades stemmed from the state’s ballooning revenues and management policies that chipped away at budget gaps and erased a deficit based on accounting principles. With a nearly $3 billion expected surplus the once barren rainy day fund will rise to at least $1.7 billion.

Erdman’s tenure cuts across multiple administrations under both Republican and Democratic governors.  Evers is a Democrat but the GOP holds a legislative majority. It’s not always an easy task to manage the diverging goals of the executive and legislative branches.

“One great thing about Wisconsin government is that the debt manager is a civil servant” so the position doesn’t shift with political winds, Erdman said. “It allows for consistency and is positive from a credit position I think.”

The relationships across the public finance community built over his time stand out, Erdman said.

“I think public finance is full of great relationships where there’s competition but in the end many competitors are striving for same end product which is to make sure we have a great public finance market,” Erdman said.

Erdman, a lifelong resident of Wisconsin, joined the Department of Natural Resources in 1990 and spent four years working with Wisconsin municipalities using the state’s Clean Water Fund Program. In 1994, he moved to the capital finance office where he worked under Frank Hoadley. He was named deputy in 2010.

“I hope I’ve passed along best practices to my staff just as Frank Hoadley passed on best practices developed under him to me,” Erdman said. Wisconsin is known for its strong disclosure policies.

The state hired Kevin Taylor to fill Hoadley’s shoes when he retired in 2013. Two years later Taylor left and Erdman was elevated to the top spot.

In a note sent to the public finance community Wednesday Erdman said: “Thanks to everyone that has been part of my rewarding governmental issuer career — investment bankers, underwriters, municipal sales and trading, investors, rating analysts, municipal advisors, attorneys, trustees, auditors, and everyone else that provides a critical role to this impressive public finance market.”

In a pitch to potential job seekers, Erdman noted the benefits of the Wisconsin job. “How can anyone turn down Packers, Badgers, Brewers, Bucks, cheese, beer, and brats?”

Erdman grew up in Westfield and holds a public administration degree from the University of Wisconsin-LaCrosse. In his spare time, he serves as an Advanced EMT for his local community.

Erdman also has at least one deal in the works before his departure. The state will take competitive bids on $180 million of new money GOs Tuesday. Erdman is also eyeing a $125 million floating-rate note issue to add more variable-rate diversity to the state’s $6.7 billion GO portfolio. Given the years-long low interest rate environment on long-term structures, floating-rate paper has fallen to just $135 million and now might be a good time to add exposure given that it would offer lower rates, Erdman said.

How to Open & Register for a Stock Broker Account at TradeKing
Do Kwon faces legal trouble in South Korea, China remains Bitcoin mining powerhouse, and Ethereum 2.0 eyes ‘huge testing milestone’: Hodler’s Digest, May 15-21
Munis on a tear, yields plummet 45 bps in a week
Attorney claims Puerto Rico Oversight Board law firm had conflict
Puerto Rico Oversight Board wins one and loses one in appeals court