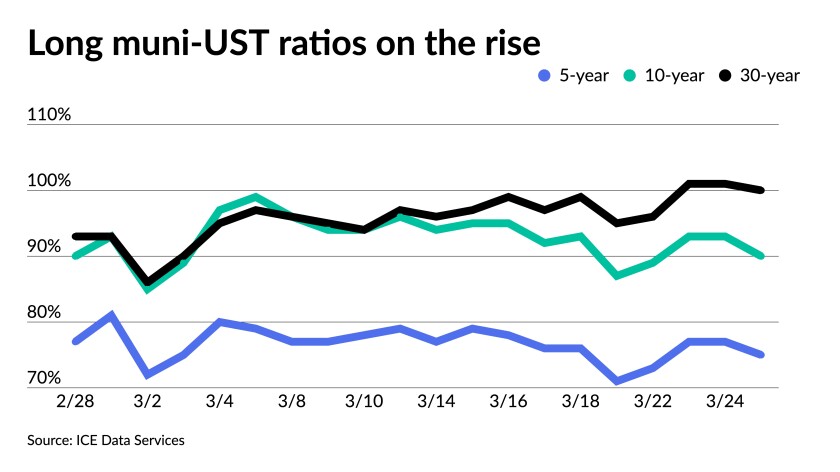 Municipal yields rose Friday to close out a rough week, with the short end of the curve again seeing the brunt of the damage, with double-digit cuts to triple-A scales. U.S. Treasuries yields rose another 14-15 basis points on the short end, while equities ended mixed.

Next week’s supply is slated to be $8.121 billion, $6.145 billion negotiated deals and $1.976 billion of competitive loans. Taxable issuance grows next week, led by $1.05 billion of taxable social senior revenue bonds from California Health Facilities Financing Authority, the remaining allocation of its No Place Like Home program.

The New York City Transitional Finance Authority will bring $1.25 billion of taxable and tax-exempt future tax-secured subordinate bonds, with $950 million of exempts in the negotiated market and $300 million of taxables being sold in the competitive market. New York has flooded the market with paper the past few weeks, seeing some concessions in pricing amid the volatility. A $600 million of green transmission project revenue bonds for the New York Power Authority is also on tap.

Additionally, $1.35 billion of special facility revenue bonds for the Terminal 4 John F. Kennedy International Airport Project from the New York Transportation Development Corp. will be pricing in the coming weeks.

In the competitive market, Boston is coming with $334 million of general obligation bonds and Louisiana with $238 million of GOs in two deals.Bond Buyer 30-day visible supply sits at $$16.28 billion.

With volatility and flattening of the yield curve, the climate is challenging, according to a New York underwriter.

“There is pressure on the curve up and down, exacerbated by selling pressure,” he said on Friday.

“I think that the challenge has really been to get deals placed in a manner that is consistent with where they have come in the past, but with all this dislocation in the market it has caused quite a bit of spread widening, even on good triple-A credits,” he said.

While municipals have been slow to react to the flattening yield curve, the underwriter said he has noticed investors being much more selective with their choices along the yield curve given that Treasuries have backed up so quickly.

Munis have not been keeping pace with the changes in the Treasury market, especially on the short-end of the yield curve where the five-year benchmark Treasury yield was up 16 basis points on Friday, he said.

On a positive note, however, he said, with a steady volume of supply in the market, there are pockets of interest for different structures the market hasn’t seen in a while.

He said higher-coupon premium bonds and discount bonds are both in demand among investors looking at new and upcoming deals.

“There are still some people poking their heads up,” he said.

Underwriters and traders, on the other hand, are getting “beat up” with all the volatility and overall buyer reluctance to participate with yields fluctuating so much.

“A lot of bonds in inventory are a lot cheaper than they were two weeks ago, so it’s been challenging,” he said.

Seasonally, however, he is optimistic the climate will change in the next few weeks.

“Munis are coming up on tax time, so hopefully some of the selling pressure starts to abate around April 15,” he said.

Barclays strategists Mikhail Foux, Clare Pickering and Mayur Patel said it’s understandable that munis can’t keep up with fast-moving Treasuries, but volatility is never good for tax-exempts, and muni-UST ratios have been slowly climbing over the week.

During the four Fed hike cycles over the past 30-plus years, intermediate ratios have fallen while long ratios have somewhat underperformed, they said. The latter is unsurprising, given the Treasury curve flattens as the Fed tightens, while the long end of the municipal curve regularly underperforms owing to fund outflows and investor preference for shorter-dated bonds, they said.

Excluding the market upheaval of 2020-21 and focusing mostly on what occurred to muni ratios between 2016 and 2019, they said, current muni-UST levels are slightly cheap to fair value, which they regard as leaving minimal downside to municipals compared to Treasuries over the medium term.

“However, we should not be surprised if near term the tax-exempt market overshoots to the downside, partially due to heavier supply in late March and April,” Barclays strategists said. Both taxable and tax-exempt visible pipelines are at their highest levels since late 2021.

Meanwhile, selling pressure has increased, and the par of bonds available for bid is close to its highest level since April 2020.

While remaining cautious for the time being, they said, current valuations and yields are beginning to appear enticing enough, and investors should begin to dip their toes carefully. The high muni-UST ratio levels could also be a signal for buying— the 100% level for 10-year ratios and 105%-110% for 30-year ratios.

This week’s fund flow data marks the 11th week in a row that muni mutual funds have had outflows. Muni ETFs, which continue to gain new capital this year, have been a bright spot in the muni fund market. Municipal bond ETFs have exploded in popularity during the last decade.

Since 2007, Barclays strategists said muni ETF assets under management have increased from less than 1% to more than 8% of the whole muni fund universe.

“The growth in ETFs has outpaced that of muni closed-end funds by a large margin,” they said. “The rapid rise of these passive muni funds as a share of the overall municipal credit market has meant that ETFs have become an increasingly important factor in the market.”

Per Bloomberg and Refinitiv Lipper data, there are presently 65 muni ETFs on the market, with around $81 billion of total assets under management, compared to $66 billion for closed-end muni funds and $908 billion for open-end muni funds, Barclays noted.

Front loading
Although lots of time remains until the Federal Open Market Committee meets again on May 3 and 4, and much can happen between now and then, analysts are listening to Fed officials and expect aggressive action against inflation.

“Recent remarks from Fed policymakers have doubled down on the message that policy tightening will be front loaded, and we are now forecasting an even steeper path for policy tightening in the near-term,” said Morgan Stanley researchers, led by Ellen Zentner, chief economist at the firm.

Morgan Stanley expects the FOMC to raise rates by a half-point each in May and June, with quarter-point hikes at the remaining meetings this year, followed by three in 2023, which will bring the fed funds rate target to 3%. The Fed, they say, will begin quantitative tightening in May.

“A significantly front-loaded policy path will continue to put pressure on financial conditions, but to date the Fed has not shown substantial concern about tighter financial conditions, and rather policymakers have actually welcomed the development,” they said. “While a disorderly tightening of financial conditions remains a risk to the outlook, particularly in areas like credit, our baseline growth outlook remains constructive, which we think helps contain risks that financial conditions become too dislocated in response to the Fed’s actions.”

Uncertainty remains, they note, and data will guide rates. “If inflation is stubborn in moving off its peak, we could see additional 50 bp rate hikes this year and even more cumulative tightening, whereas if the deceleration in inflation that we project for next year comes sooner than anticipated, we could see the Fed ease back from policy tightening,” Morgan Stanley said.

But a 2024 rate cut is possible, they said, “as policymakers look to recalibrate off a restrictive policy stance as both growth and inflation moderate.”

And the Fed has taken a hawkish turn. “There are really no doves on the FOMC today only hawks as consumer inflation reaches 40-year highs and is set to rise further as oil and other commodities move even higher on stiff energy sanctions and the outbreak of war on the European continent,” said Scott Anderson, chief economist at Bank of the West.

Anderson expects a 50-basis-point hike in May, followed by 25 basis point hikes at the remaining 2022 meetings and three hikes in 2023.

“In short, we are expecting one of the fastest and potentially one of the shortest rate hike cycles from the Fed in decades,” he said. “Buckle up folks, this landing is bound to get rough.”

The Department of Water and Power of the City of Los Angeles (Aa2//AA-/AA/) is set to price Wednesday $334.555 million of power system revenue bonds, 2022 Series B. Goldman Sachs.