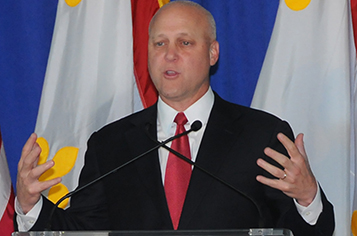 The White House is urging cities and towns to set up infrastructure coordinators to take advantage of the Infrastructure Investment and Jobs Act.

White House Infrastructure Coordinator Mitch Landrieu, speaking Friday at the U.S. Conference of Mayors’ winter meeting, said local officials should appoint advisors and task forces to coordinate with state and federal agencies to ensure they get a piece of the $1.2 trillion IIJA funds.

“To be set up for success we have to think across agencies, and it’s really important that you and local governments do the same,” he said. “I’m asking you to do it.”

The IIJA, enacted in November, features 100 programs and will be implemented through 14 different federal agencies, Landrieu said. Nearly half of the funds will flow through the U.S. Department of Transportation.

Landrieu last month asked states to tap infrastructure czars to foster cross-agency and federal coordination, and Friday he noted that several have done so.

With the bulk – but not all – of the IIJA money passing through the states, the cities need to be partnering with their governors, Landrieu said.

“For some of you, the fact that the money has gone to the states gives you headaches,” he said. “It may not easily trickle down to your community, you need to do work on your level but we’re going to be doing a lot of things to help.”

The White House has put out a fact sheet with all the competitive programs that have money directly for cities and in the next few months will release a guidebook that will detail the law’s 100 new programs and grants, including application dates and dollar amounts, he said.

Cities can organize ahead of the grants by mapping out locations of their lead pipes and broadband needs and where they would like to see more electric vehicle chargers, he said.

“We have to be organized horizontally and vertically, so it will be very helpful to your governor for you to be organized as well,” he said, encouraging cities to set up an “infrastructure table” that’s based on existing emergency response tables, that’s staffed with experts on transportation, water, broadband and other funding areas in the bill.

“We’re all trying to get the money out of the door quickly but…unlike the [American Rescue Plan Act] this is a long-term investment,” he said. “Over the next five to seven years, this $1.2 trillion is going to make a huge difference. We want to get it right.”

President Joe Biden closed out the 90th winter meeting Friday by telling mayors they are critical partners and making an argument for the Build Back Better bill, which has lost momentum since December.

Cities lobbying for the IIJA were critical to its passage, Biden said.

“The reason it got done is because of you,” Biden said. “Because [Congress] knows how it goes in your cities determines how their states go.”

The “biggest arsenal” the administration has now to lift the economy is the Build Back Better bill, he said.

“Nothing will do more to ease pressure on American families,” the president said. “We need the voice of mayors telling the stories of what your communities need and the impact we’re making on peoples lives.”