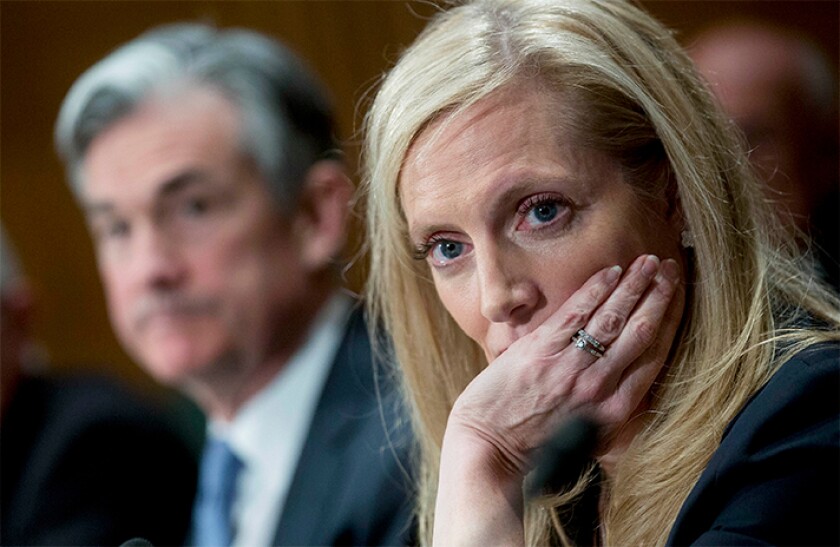 Newly released transcripts of Federal Reserve policy meetings in 2016 show then-Governors Jerome Powell and Lael Brainard were quick to pivot away from planned interest-rate hikes in the face of risks posed by a stumbling Chinese economy.

Both policy makers made clear in the year’s January meeting of the Federal Open Market Committee they believed the balance of risks for the U.S. economy had turned to the downside. They each supported a change in the committee’s statement signaling to investors that rate increases might get put on hold.

Powell expressed plenty of uncertainty in his own views over whether the U.S. economy faced a coming recession, according to the 2016 transcripts published Friday with the customary five-year lag. Projections then for several interest-rate increases in 2016 bore some resemblance to the outlook at the start of 2022.

“Of course, there’s no way to know,” he said in January 2016. “We’re not good at predicting these downturns, and we’ll have to simply wait and see. It’s a plausible, if premature, story for a weakening economy.”

Brainard was more forthright in expressing her view — which she had already expressed publicly — that the FOMC shouldn’t ignore international conditions. She also made clear in the January meeting that she was unlikely to support a rate hike at the next meeting, in March.

And by April, with the panel still on hold, she was taking a modest victory lap for her views on international linkages, which had not been widely accepted when first aired in 2015.

“Developments in the first three months of the year serve to highlight the significant feedback loop that connects U.S. policy expectations and exchange rate movements to China’s currency management and economic growth challenges,” she said during the April meeting.

Powell, a governor since 2012 who was promoted to Fed chair in 2018 by President Donald Trump, was recently renominated for a second four-year term by Joe Biden.

Brainard has been a governor since 2014. She has been nominated by Biden to a four-year term as the central bank’s vice chair.

In some ways, there are parallels to 2016 in how the Fed entered 2022. In both cases, policy makers anticipated multiple interest-rate hikes — four in 2016 and three in 2022 — while worries percolated over growth prospects in China.

Plans for increases in 2016 were soon derailed as fears of a slowdown in China, in part provoked by a strengthening U.S. dollar, spooked global equity markets and tightened financial conditions worldwide. The Fed ended up hiking only once in 2016, in December, and the episode underscored how interconnected global financial markets had become.

The difference today is that central bankers in the U.S. and other developed markets are fighting a bout of high inflation provoked by the COVID-19 pandemic and a massive fiscal and monetary response. The consumer price index rose in the U.S. by 7% in 2021, compared with 0.7% in 2015.

Back in 2016, transcripts show that after financial markets calmed, discussion of when to resume rate hikes began again in earnest by September.

At that point, Powell still urged patience, while worrying about getting behind the curve on inflation.

“We’re making progress toward 2% inflation, and my baseline case” is that the Fed “can continue to do that,” he said in September. “But let’s face it, it’s happening at a snail’s pace. So, for me, the balance of risks continues to call for patience and a gradual path of rate increases.”

Brainard was again more dovish and argued against a hasty resumption of rate increases in ways that foreshadowed the policy framework changes the FOMC eventually embraced in August 2020 under Powell’s chairmanship.

She noted then-recent research pointing to the weakened ability of low unemployment to trigger higher inflation. In September she also highlighted racial disparities in unemployment measures rather than focusing on the overall unemployment rate.

Powell wasn’t far behind in his dovishness, also airing views on inflation in November 2016 that later became enshrined in the new framework.

“With inflation having run below our 2% inflation objective every single month since I joined the board 4 1/2 years ago, I do not expect to feel alarmed if inflation moves modestly above 2%,” he said.