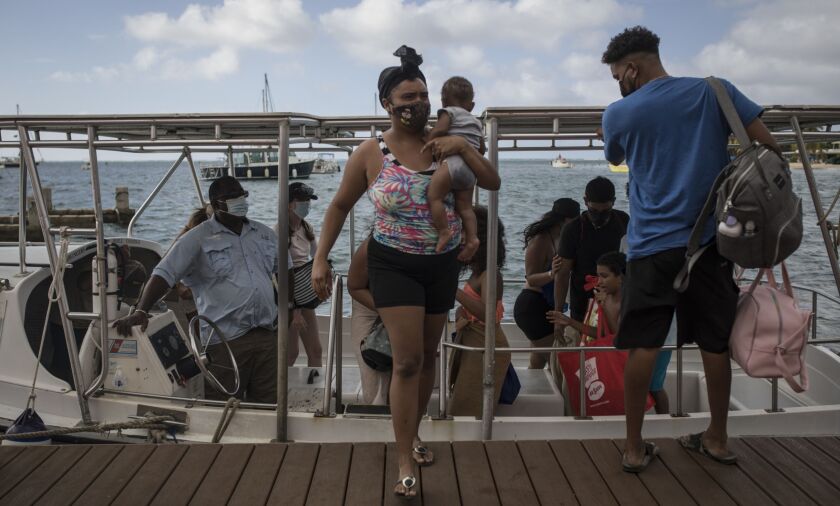 Among the U.S. Virgin Islands government’s many problems is an economy that shrunk 24% in real terms from 2009 to 2019.

The territory’s economy has continued to struggle in the past two years, with the islands’ employment down 9.5% through from February 2020 to October 2021, according to New York Federal Reserve Bank Early Benchmarked employment data. Of the 50 states, only Hawaii has performed worse.

A Moody’s Investors Service report from October said one of the factors explaining the islands’ government’s Caa3 rating is a “small and highly concentrated economy.”

Additionally, the central government had $3.28 billion of adjusted net pension liabilities for the USVI government, according to Moody’s. WAPA had $296 million of long-term liabilities excluding debt.

While the government is considering refunding at least $1 billion of its outstanding bonds for cost savings, the challenges to its overall economy run deep.

Since World War II the biggest economic sectors have been tourism, oil refining, and rum production.

Since the 1960s tourism has at times been more than 50% of the gross domestic product and has generated more than 25% of the employment, said University of Virgin Islands Economics Professor Mark Wenner. Tourism spending on the islands peaked in 2007, fell in the Great Recession, and recovered partially thereafter, according to the World Bank. In 2018, the latest available year, spending was down about 40% from the peak.

The other big contributor to export earnings from 1965 to 2012 was refined oil from the Hovensa oil refinery on St. Croix. In 2013 the refinery closed, hammering the islands’ economy and sharply impacting government finances.

Limetree Bay Energy commenced work to restart the refinery in 2019 but gave up this past summer and declared bankruptcy. The restart was leading to environmental problems and the federal government had ordered pauses in refining, which pressured Limetree financially. At the time Moody’s Investors Vice President Pisei Chea said, “The payments in lieu of taxes payments received from the refinery are a significant source of revenue for the government.”

Limetree continues to provide oil storage at the site.

“Rum production is the other main export earner for the territory but it depends heavily on rum subsidies and preferential treatment compared to other rum-producing countries,” Wenner said. “Ninety-eight percent of the excise taxes levied on rum exported to the U.S. mainland are rebated to the territorial government and a large portion of the rebates (50%) are shared with the two rum producers in the territory. To support marketing of their products and purchase of imported molasses, the most important ingredient in making rum.”

“Over the last five decades, the Virgin Islands have largely been unsuccessful in diversifying its economy,” Wenner said. “The U.S. Virgin Islands currently ranks as one of the most tourist-dependent economies in the Caribbean region and in the entire world.”

In the 1960s tourism and construction booms led to improved incomes, life expectancy and other living conditions, Wenner said.

Since the mid-2000s the Virgin Islands has lost competitiveness in the tourism sector both for the cruise-ship visits and the stay-over market, compared to other parts of the Caribbean and Mexico, Wenner said.

Over the last several decades the cruise ships mainly visited St. Thomas, St. John had hotel tourism from visitors in getting closer to nature, and St. Croix was where much of the manufacturing was.

In the 1970s and 1980s there were pharmaceutical, watch, aluminum, and mattress producers in St. Croix, said Oran Roebuck, Banco Popular Virgin Islands region manager. As federal legislation shifted, these industries shrank. Now the rum industry is the biggest producer, she said.

Hurricanes Irma and Maria hit the islands very hard in 2017, leading to some of the islands’ hotels closing. However, since then there has been an increase in tourists staying in Airbnb-type lodgings, said Virgin Islands Sen. Donna Frett-Gregory.

Present economic conditions
Observers disagree on the strength of the current economy. Roebuck said the economy is “strong.” Federal government funds due to the hurricanes and the COVID-19 pandemic are helping the economy and helping the government have enough funds to spend.

Frett-Gregory also said the economy was “rebounding” from the pandemic’s effects. “We have a significant amount of construction projects occurring, and our tourism industry is on the upswing. We are also scheduled to see one of our major hotels reopen in late 2022.”

Others were not as positive.

“Current economic conditions remain weak, exacerbated by the effects of the pandemic on tourism,” Chea said. “Although air travel has rebounded, cruise ship arrivals remained at zero through June and were the largest source of visitor arrivals to the territory pre-pandemic. The indefinite closure of the Limetree Bay oil refinery also reduces the U.S. Virgin Islands’ opportunities for economic diversification and employment gains in the manufacturing sector.”

“On balance, the economy expanded moderately, but activity in most industries remained below pre-pandemic levels,” he said. “Recovery in the service sector and tourism generally continued to be a bright spot, growing arrivals and strengthening visitor demand.”

Wenner saw things similarly. He said the unemployment rate in the summer had declined to 8.5% from a peak of 13.7% in summer 2020. He said government spending is “unprecedented,” with the local government approving a near $1 billion budget in fiscal 2022, which started Oct. 1, 2021.

Adding to the territory’s economic challenges, its population declined 18.1% to 87,146 in 2020 from 106,405 in 2010, according to the U.S. Census. Wenner said the most recent number may be an undercount partly due to the difficulties of running a census during the pandemic. However, he said the island’s population surely declined, at least partly due to the impacts of Hurricanes Maria and Irma and the Hovensa oil refinery closing.

Migration from the island creates a shrinking working age population, Chea said. Compounding the problem, she said “income levels are very low,” with 2019 per-capita income at $25,497, which was 45.5% of the U.S. level.

This story is the first of a series on the USVI.

Crypto.com breach may be worth up to $33M, suggests onchain analyst
MicroStrategy shares drop on bitcoin’s slide, SEC rejection of company’s crypto accounting
Singapore crypto ATMs shut down after central bank crackdown
Infrastructure Act’s bridge money begins to flow to states
Blockchain and the evolution of business models in the game industry