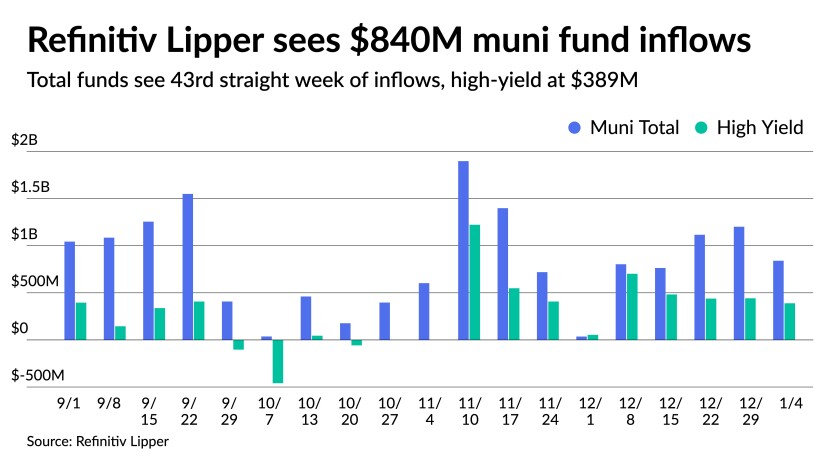 The Federal Reserve expects Omicron to fizzle in weeks, and while pandemic-related risks remain, the economy is strong and the Fed needs to address inflation and could liftoff as soon as March, Federal Reserve Bank of St. Louis President James Bullard said Thursday.

“The FOMC could begin increasing the policy rate as early as the March meeting in order to be in a better position to control inflation,” he said. “Subsequent rate increases during 2022 could be pulled forward or pushed back depending on inflation developments.”

While rate increases have been expected, the calendar flip to 2022 has intensified market reactions to the potential sooner-than-anticipated hikes.

Refinitiv MMD’s Senior Market Analyst Peter Franks noted the last two times MMD moved its scales in either direction by five basis points was on Nov. 9 when it bumped its 10-year five and prior to that it was a five basis point cut on Oct 21. From Nov. 30 until Dec. 31, the 10-year sat at 1.03%. MMD’s 10-year on Thursday is at 1.12%.

“Fundamentals outside of municipals are more volatile now and ongoing rich valuations put generic yields more on the defensive than is customary so early in the month,” said Kim Olsan, senior vice president at FHN Financial. “Bids wanted volume is running higher for a month that should have more demand. In the first three days of the month, the daily average is above $600 million and about 10% higher than 2021’s rate.”

Olsan noted the bulk of block items on Wednesday fell below the $5 million mark “as sellers are perhaps aware of elevated dealer carry ($13 billion last reported figure) and are avoiding advertising larger positions.”

Secondary trading pointed to a concentration of volume in 4s-5s past five years as rate risk comes into the forefront, she said.

Secondary trading showed various prints at much weaker levels, evident in the cuts to scales.

The Bond Buyer 30-day visible supply grew to $9.06 billion Thursday. As supply rolls in, a more constructive flow should emerge for munis.

But the labor market is the other highlight of the week.

Despite the ADP data “largely reflect[ing] activity prior to Omicron,” he said, “the labor market has recovered markedly and is on track to return to the pre-COVID 3.5% unemployment rate this year, which will enable the Fed to commence a rate hiking cycle by midyear.”

While Omicron could hit the January numbers, Ruesterholz said, any impact from the variant should be “short-lived.”

Others agree. “The year ahead promises to be another one of extremely tight labor markets (especially in the U.S.), where we expect wages to continue their sharp climb as businesses bid for workers,” said James Solloway, chief market strategist at SEI’s Investment Management Unit.

The biggest challenge for the Federal Reserve going forward, he said, will be finding “the proper balance between having an economy run above its long-term potential in the interests of achieving full and inclusive employment versus the need to lean against inflation pressures that are starting to look more entrenched.”

Despite the uptick, claims are near the lowest levels in decades, said Mark Hamrick, senior economic analyst at Bankrate. “This suggests workers can be reasonably confident about job security and an upbeat employment outlook for this year.”

The biggest labor market issues, he said, are whether employers will be able to find workers and how many people will return to the workforce.

The services PMI dropped to 62.0 in December from 69.1 in November, while the business activity/production index declined to 67.6 from 74.6.

Economists polled by IFR Markets expected the PMI to fall to 66.8.

Omicron was also cited by Berenberg Capital Markets Chief Economist for the U.S. Americas and Asia Mickey Levy. “The Omicron variant-driven surge in COVID-19 cases is likely to further curtail services sector business activity in the near term as consumers adjust their consumption patterns in response,” he said.

Also released Thursday, the international trade deficit rose to a near-record $80.2 billion in November from $67.2 billion in November, “practically reversing the sharp narrowing in the deficit a month earlier,” Quinlan and Seery said. “Strong imports continue to reflect the more robust recovery in the United States but are also a sign of incremental improvement in easing supply chain constraints.”

Economists had expected a $70.0 billion shortfall.

Separately, factory orders jumped 1.6% in November after a 1.2% rise in October, while excluding transportation orders gained 0.8% after a 1.5% increase.

It will be difficult to duplicate 2021’s success in 2022, and all signals point to a considerably tougher year ahead for munis due to slightly higher rates and richer ratios, according to Barclays PLC.